The Parliament is known as Union Legislature or National Legislature, which is a supreme body of decision making and symbol of democratic governance.

The Parliament is known as Union Legislature or National Legislature, which is a supreme body of decision making and symbol of democratic governance. The Parliament is the most powerful platform with accountability for debating on the issues regarding welfare of the country and its people and enacting laws and making changes to the constitution.

When the Parliament meet for discussing various agenda and approving bills, motions with a scheduled meeting is called Session. The Parliament holds THREE sessions in a year.

It has two important powers and functions called as legislative and financial. The legislative powers are for law making and the financial powers are to prepare money bill as called as budget. Also the parliament has electoral functions with regard to elect the President and the Vice-President of India.

The Parliament has judicial function also on the matters of the proposals for the removal of the President, Vice – President, Judges of the Supreme Court and High Courts and the process of removal is called ‘impeachment’. It is the duty of the President to summon the Parliament and it must have not less than two sessions in a year. Every year, at the commencement of the first session of the parliament, the President delivers his special address which would be the future course of action of the parliament in view of giving framework for new policies, programmes and initiatives of the government. The parliament of India has functions of legislation, overseeing of administration, passing of the  budget, ventilation of public grievances, and discussing national policies and issues of concern. The cabinet, both individually and collectively is accountable to and removable by the Loksabha.

The parliament has two houses and both houses carry the same values and responsibilities with a few exception such as passing the finance bills. The first one is the Lok Sabha (Lower House or House of People) with 543 members elected from 543 Parliamentary constituencies across the country directly by the people who have attained the age of 18 and above and registered as voters. The Lok Sabha has 2 nominated members from the Anglo-Indian community.

Quorum of the House: One tenth of the total number of members of Lok Sabha / Rajya Sabha constitutes the quorum for a meeting of the House. 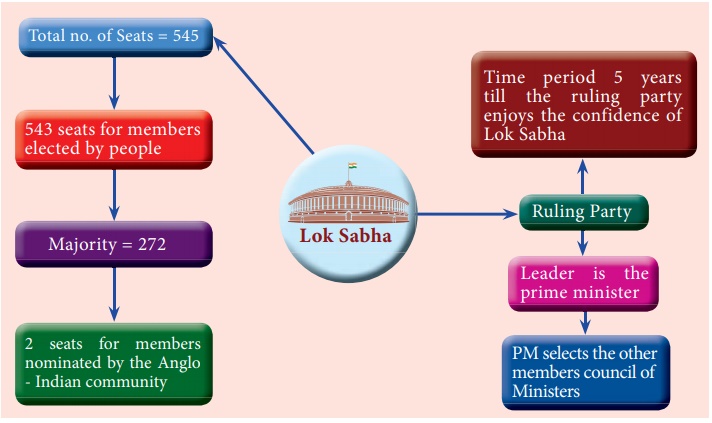 The grand total number of members in the Lok Sabha is 545, but the nominated members cannot decide the government when it proves majority on the floor of the House. The Lok Sabha is the highest forum for discussion, debate on public issues, interest and policies to cater to the socio-economic needs of the people.

Roles and Responsibilities of the Speaker

The leader of the House of the People is the Speaker – who is elected by the Lok Sabha, from among its members. The Speaker’s duties are to conduct, facilitate the debates and discussions as well as the answers to questions, regulating the conduct of Members of the House and taking care of their privileges and rights. The Speaker of Lok Sabha is the administrative head of the parliamentary secretariat.

The Speaker also ensures that the members adhere to the appropriate procedures, and to allow the members to raise question, allotting time to speak and withdraw the objectionable remarks from record and moving a motion of thanks to the President’s speech. The Speaker has the power to expel the members if they flout or violate the norms and rules of the house.

The permission of the Speaker is required to move amendments to a bill. It is up to the Speaker to decide whether the bill has to be moved or not. The Speaker plays the role of guardian of the rights and privileges of the house, its various Committees such as consultative, select, advisory and of members of that Committees. Another important power of the Speaker is to refer any question of privilege to the Committee of privileges for examining, investigating and reporting. The questions raised by the members and answers, explanations and reports are addressed to the Speaker.

Jawaharlal Nehru, one of the chief architects of India and a driving force behind its democratic principles of the Constitution, placed the office of the Speaker in India in the proper context when he said: “The Speaker represents the House. He/she represents the dignity of the House, the freedom of the House and because the House represents the nation, in a particular way, the Speaker becomes a symbol of nation’s freedom and liberty. Therefore that should be an honoured position, a free position and should be occupied always by persons of outstanding ability and impartiality”.

The Speaker is the final authority to decide on the question of point of order. Under the constitution, the Speaker enjoys special provisions and certifies money bills. The Speaker of the House of the People presides the joint sessions of the parliament in case a special occasions or in the event of disagreement between the two houses on certain legislative

measures. The Speaker decides whether a Bill is a Money Bill or not and his decision on this question is final. It is the Speaker who decides on granting recognition to the Leader of Opposition in the House of People. Under 52ⁿd Constitution Amendment, the Speaker

Council of the States (Rajya Sabha) 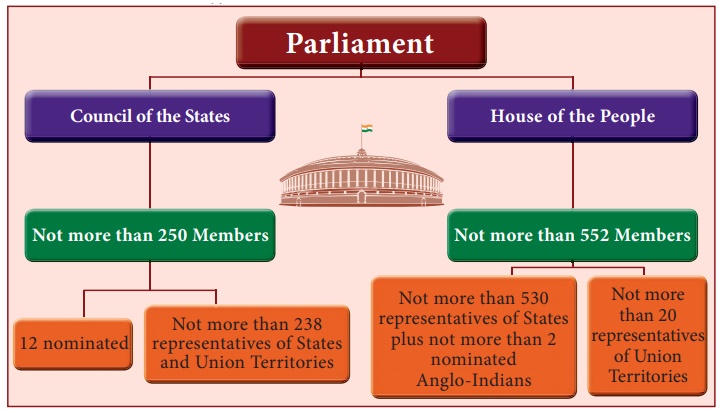 The Rajya Sabha or the Council of States is called as upper house. It has a total number of 250 members including 238 from all the states and union territories and 12 members nominated by the President. The council of states Rajya Sabha is called as second chamber of the Parliament of India. The Rajya Sabha is an institution to protect the rights and interests of the states like the senate in USA. It was constituted on 3rd April, 1952.

The members for Rajya Sabha are elected by the members of the respective State Legislative Assemblies (MLAs). Apart from the members of the states, twelve distinguished members from the has the disciplinary power to disqualify a member of the house on the grounds of defection. Even though, the Speaker also one of the members of the House and holds neutral, does not vote in the house except rare occasions when there is a tie at the end of the decision. fields of literature, science, art, and social service were nominated by the President of India. Unlike House of People, Council of States is not subject to dissolution but one third of the members retire every second year. The term of the individual member is six years. The members of the Council of States are elected by their respective state legislative assemblies in accordance with the system of proportional representation by means of the single transferable vote.

The Vice-President of India is the ex-officio Chairman of the Rajya Sabha. The Chairman presides over the proceedings and regulates the Rajya Sabha. Except the Money/Financial Bill all other bills will be placed before the Rajya Sabha for discussion, questions, motions and resolutions under the rules of procedure and conduct of business. The functions of Rajya Sabha may broadly be categorised as: Legislative, Financial, Deliberative and Federal. Legislation is by far the most important business of Rajya Sabha, as indeed of Parliament and in this sphere, Rajya Sabha enjoys almost equal powers with Lok Sabha. In the U.S.A, the representatives in the state council is called as Senate where every state has equal representation irrespective of size and population of the states. But in India, the representation in the Rajya Sabha is based on its size of population.

Who can be a Member of Rajya Sabha?

v  Must be a citizen of India

v  Under the Representation of the People Act, 1951, a person had to be an elector in a parliamentary constituency in the State from where he seeks election to Rajya Sabha.

v  He/She has to be an elector in a parliamentary constituency anywhere in India.

Women members in the Rajya Sabha urged the Government to ensure the passage of the Women’s Reservation Bill in the Lok Sabha. The Bill, which proposes 33% reservation for women in Parliament and State legislatures, was passed by the Rajya Sabha in 2010 but has been stuck in the lower house for nine years.

The Constitution (108th Amendment) Bill, commonly known as the Women’s Reservation Bill, needs to be approved by the Lok Sabha in order to become law. 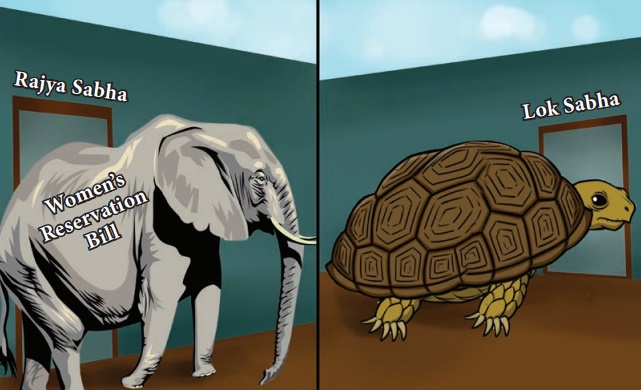 As a class, discuss what you already know or think about the following topics:

c. Needs to be approved by the Lok Sabha

Topic : Which House is considered to be more powerful the Lok Sabha or the Rajya Sabha?

Task : Student should think individually for a few minutes, and then discuss and compare their responses with a partner before sharing with the entire class.

Powers and Privileges of Members of Parliament

1.  Freedom of speech in Parliament and immunity of a member from any proceedings in any court in respect of anything said or any vote given by him in parliament or any Committee thereof.

2.  Immunity to a person from proceedings in any court in respect of the publication by under the authority of either House of Parliament of any report, paper, votes or proceedings.

3.  Prohibition on the court to inquire into proceedings of parliament.

5.  Freedom from arrest of members in civil cases during the continuance of the session of the House and forty days before the commencement and forty days after its conclusion.

6.  Exemption of a member from service of legal process and arrest within the precincts of the House.