The law making process in Indian Parliament stands evident for its democratic credentials.

The law is a guiding force to regulate the society, politics and economy for the welfare of the state and people. The law is primarily introduced in the Parliament in the form of ‘bill’ as proposed legislation for consideration of the legislature. The bill will be taken for thorough discussion in the parliament to have an understanding within the framework of the constitution.

The bill will become law once the legislature passed it and approved by the President. The law becomes an act only after getting consent from the President of India. The primary function of the Parliament is to make fresh laws and bring changes in the existing laws in accordance with the constitutional procedures. The Parliament of India passes two types of bills such as: 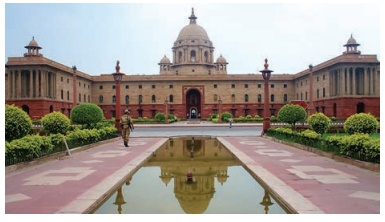 1. The first stage of the bill relates to the introduction of the bill in either house as ‘Reading of the Bill’. Most of the bills are introduced by the Ministers concerned. The bill is drafted by the technical experts in that particular field and then council of ministers will approve the bill. The ordinary Member of Parliament can also introduce a bill which is called as ‘Private Member Bill’. For the introduction of the bill it should be informed to the Speaker of the Lok Sabha or The Chairman of Rajya Sabha one month in advance. Then the date of introduction for the Private Member Bill will be fixed and allowed to move the bill in the floor of house. Generally, there will be no discussion on the proposed bill at this reading stage which is only a formal affair.

2. After the introduction of bill, it will be published in Gazette of India. The Speaker or the Chairman may allow some bills to be published in the Gazette even before the first reading, in that case, no motion for leave to introduce bill is necessary.

3. The Second Reading of the bill usually takes place after an interval of two days after the first reading. At this stage, any of the four courses are adopted.

v  The bill may be taken for consideration by the House at once.

v  Itmay be sent to a select Committee of the House.

v  It may be circulated for eliciting public opinion. Very rarely bills are taken up for consideration straight away.

When the bill is adopted for circulation (i.e. 4th course), the secretariat of the House concerned requests the State Governments to publish the bill in the State Gazettes inviting opinions from local bodies and recognized associations. Such opinions are circulated among the members of the House.

The report stage is the most important stage where a bill is debated clause by clause. In this stage, the report is circulated along with original bill and the report of the Select Committee. The report stage is for giving final shape to the bill. Then the bill will be submitted for the Third Reading in which the bill is to be passed with majority of votes. The Third Reading is for formal approval by the Parliament.

After the bill is adopted at the Third Reading in either of the house, it is transmitted to the other House, where it goes through all the stages. The other house may accept the bill as it is. After coming across all the stages, it is sent to the President’s assent.

Once a bill is passed in its originating house, it also may be rejected in the other house. Otherwise, it may introduce amendments not acceptable to the original House, or may not return the bill within six months. Insuch a case, a constitutional deadlock develops between the two Houses. The President may call a joint session of the two Houses to resolve the deadlock. The Speaker or in his absence the Deputy Speaker presides over such joint sessions. The deadlock is dissolved by majority vote.

The Rights of Transgender Persons Bill, 2014

v The last time a private member’s Bill was passed by both Houses was in 1970.

v Till Now, only Fourteen Private Member’s bill have been passed by the Parliament.

v The Rights of Transgender Persons Bill, 2014: The Rights of Transgender Persons Bill, 2014 is a private member bill introduced by Trichy Shiva M.P. of Tamil Nadu, which seeks to end the discrimination faced by transgender people in India.The Bill was passed by the upper house Rajya Sabha on 24 April 2015. It was introduced in the lower house Lok Sabha on 26 February 2016. The Bill is considered historic as for being the first private member’s bill to be passed by any house in 36 years and by Rajya Sabha in 45 years. 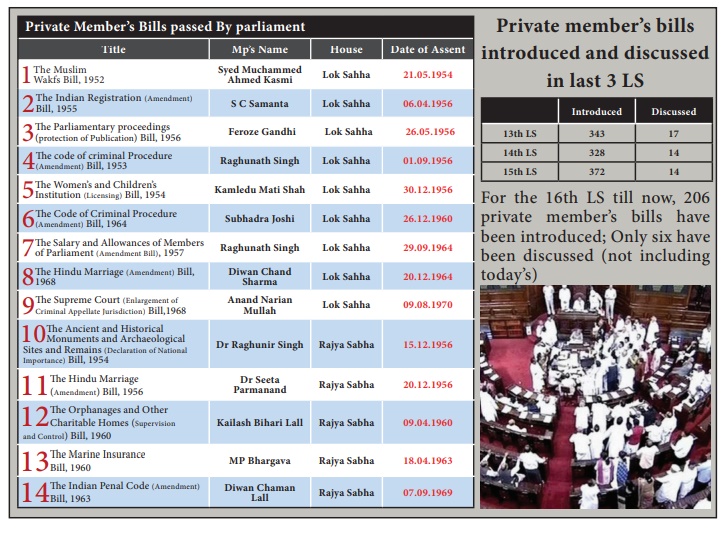 Activity - Flow Chart: Every bill has to pass through the following stages. 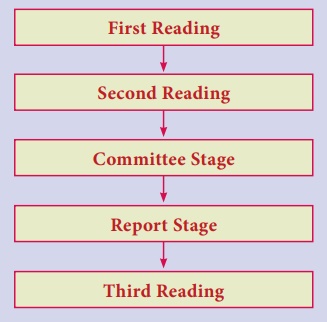