Powers of the Lok Sabha, Powers of Rajya Sabha 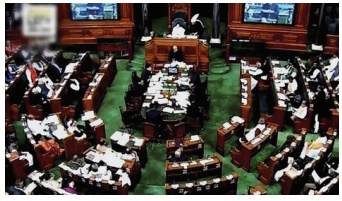 Powers of the Lok Sabha

1. The of Lok Sabha is the most powerful political institution which reflects the political, social and economic conditions of the country, holds highest responsibility and virtually represents the entire population.

2. The Lok Sabha is constituted with members elected directly by the people. These members represent the varied interests of the people. Thus it becomes the apex democratic institution. It is here that the nation’s policies, programmes and laws emerge.

3. The Lok Sabha makes the Laws on the matters of Union List and Concurrent List. It can exact new laws and repeal existing law or amend the same. It has an exclusive authority over money bills.

5. One of the privileges of the Lok Sabha is preparing and presenting the budget and financial statement, which is an explicit expression of people’s control over the nation’s economy.

7. The Lok Sabha has the power to amend the constitution and approve the proclamation of emergency.

8. The Lok Sabha involves in electing the President and Vice-President of India.

9. The Lok Sabha has power to establish new Committees and commissions and tabling their reports for debate and discussion and further consideration for implementation.

10. The Lok Sabha controls the council of Ministers and a Prime Minister, who enjoys the majority support of it. If the Prime Minister loses the confidence of the Lok Sabha, the entire government has to quit and face the election.

The Constitutional position of the Rajya Sabha (as compared with the Lok Sabha) can be studied from three angles:

1. Where Rajya Sabha is equal to Lok Sabha?

2. Where Rajya Sabha is unequal to Lok Sabha?

3. Where Rajya Sabha has special powers that are not all shared with the Lok Sabha?

In the following matters, the powers and status of the Rajya Sabha are equal to that of the Lok Sabha:

1. Introduction and passage of ordinary bills.

3. Introduction and passage of financial bills involving expenditure from the Consolidated Fund of India.

4. Election and impeachment of the President.

6. Making recommendation to the President for the removal of Chief Justice and judges of Supreme Court and high courts, chief election commissioner and comptroller and auditor general.

7. Approval of ordinances issued by the President.

8. Approval of proclamation of all three types of emergencies by the President.

10. Consideration of the reports of the constitutional bodies like Finance Commission, Union Public Service Commission, comptroller and auditor general, etc.

11. Enlargment of the jurisdiction of the Supreme Court and the Union Public Service Commission.

In the following matters, the powers and status of the Rajya Sabha are unequal to that of the Lok Sabha:

1. A Money Bill can be introduced only in the Lok Sabha and not in the Rajya Sabha.

2. Rajya Sabha cannot amend or reject a Money Bill. It should return the bill to the Lok Sabha within 14 days, either with recommendations or without recommendations.

3. The Lok Sabha can either accept or reject all or any of the recommendation of the Rajya Sabha. In both the cases, the money bill is deemed to have been passed by the two Houses.

4. A financial bill, not containing solely the matters of Article 110, also can be introduced only in the Lok Sabha and not in the Rajya Sabha. But, with regard to its passage, both the Houses have equal powers.

5. The final power to decide whether a particular bill is a Money Bill or not is vested in the Speaker of the Lok Sabha.

6. The Speaker of Lok Sabha presides over the joint sitting of both the Houses..

7. The Lok Sabha with greater number wins the battle in a joint sitting except when the combined strength of the ruling party in both the Houses is less than that of the opposition parties.

8. Rajya Sabha can only discuss the budget but cannot vote on the demands for grants (which is the exclusive privilege of the Lok Sabha).

9. A resolution for the discontinuance of the national emergency can be passed only by the Lok Sabha and not by the Rajya Sabha.

Due to its federal character, the Rajya Sabha has been given two exclusive or special powers that are not enjoyed by the Lok Sabha:

1. It can authorize the Parliament to make a law on a subject enumerated in the State List (Article 249).

2. It can authorize the Parliament to create new All-India Service common to both the Centre and states (Article 312).

Even though the Rajya Sabha has been given less powers as compared with the Lok Sabha, its utility is supported on the following grounds:

1. It checks hasty, defective, careless and ill-considered legislation made by the Lok Sabha by making provision of revision and thought.

2. It facilitates giving representation to eminent professionals and experts who cannot face the direct election. The President nominates 12 such persons to the Rajya Sabha.

3. It maintains the federal equilibrium by protecting the interests of the states against the undue interference of the Centre.

Hindi and English have been declared by the Constitution to be the languages for conducting business in Parliament. The Presiding Officer may, however, allow any member not proficient in either to address the House in his mother tongue (Article 120).