UPFC is a combination of STATCOM and SSSC coupled via a common DC voltage link.

Ø   The UPFC is the most versatile FACTS controller developed so far, with all encompassing capabilities of voltage regulation, series compensation, and phase shifting.

Ø   It can independently and very rapidly control both real- and reactive power flows in a transmission.

Ø   It is configured as shown in Fig. and comprises two VSCs coupled through a common dc terminal. 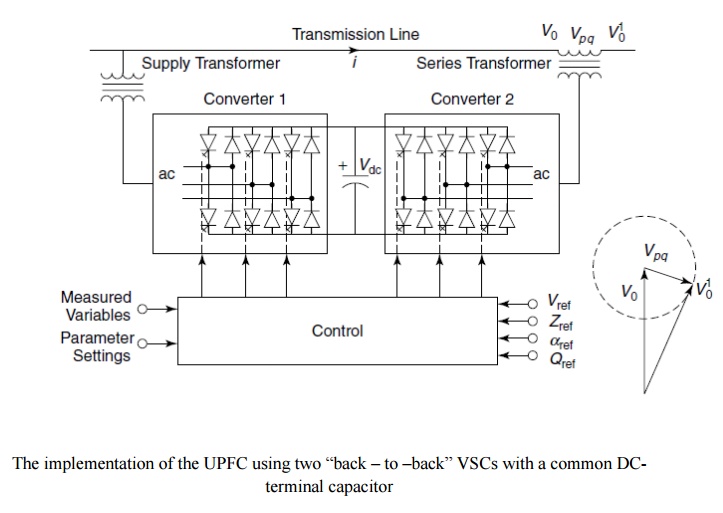 Ø   The dc voltage for both converters is provided by a common capacitor bank.

Ø   The series converter is controlled to inject a voltage phasor, Vpq, in series with the line, which can be varied from 0 to Vpq max. Moreover, the phase angle of Vpq can be independently varied from 00 to 3600.

Ø   In this process, the series converter exchanges both real and reactive power with the transmission line.

Ø   Although the reactive power is internally generated/ absorbed by the series converter, the real-power generation/ absorption is made feasible by the dc-energy–storage device that is, the capacitor.

Ø   The shunt-connected converter 1 is used mainly to supply the real-power demand of converter 2, which it derives from the transmission line itself. The shunt converter maintains constant voltage of the dc bus.

Ø   Thus the net real power drawn from the ac system is equal to the losses of the two converters and their coupling transformers.

Ø   In addition, the shunt converter functions like a STATCOM and independently regulates the terminal voltage of the interconnected bus by generating/ absorbing a requisite amount of reactive power. 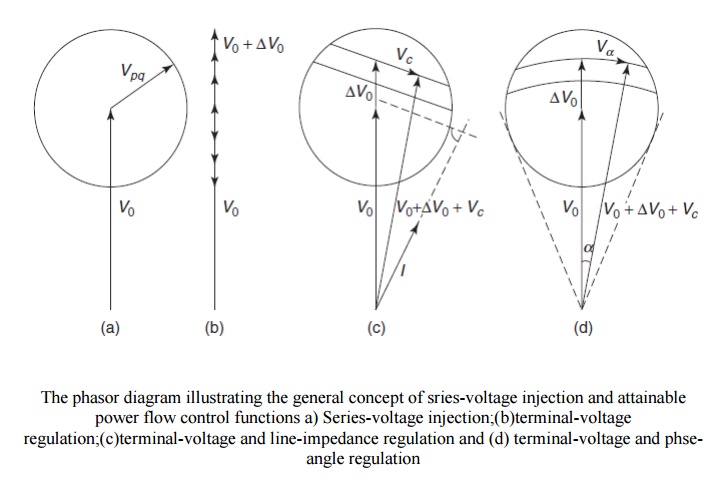 The concepts of various power-flow control functions by use of the UPFC are illustrated in Figs. 10.26(a)–(d). Part (a) depicts the addition of the general voltage phasor Vpq to the existing bus voltage, V0, at an angle that varies from 00 to 360 0.

Ø   Voltage regulation is effected if Vpq =∆V0 is generated in phase with V0, as shown in part (b). A combination of voltage regulation and series compensation is implemented in part (c), where Vpq is the sum of a voltageregulating component ∆V0 and a series compensation providing voltage component Vc that lags behind the line current by 900. In the phase-shifting process shown in part (d), the UPFC-generated voltage Vpq is a combination of voltage-regulating component ∆V0 and phase-shifting voltage component Va.

Ø   The function of Va is to change the phase angle of the regulated voltage phasor, V0 + ∆V, by an angle α. A simultaneous attainment of all three foregoing power-flow control functions is depicted in Fig.

Ø   The controller of the UPFC can select either one or a combination of the three functions as its control objective, depending on the system requirements.

Ø   The UPFC operates with constraints on the following variables :

2. The line current through series converter;

4. The minimum line-side voltage of the UPFC;

5. The maximum line-side voltage of the UPFC; and

6. The real-power transfer between the series converter and the shunt converter 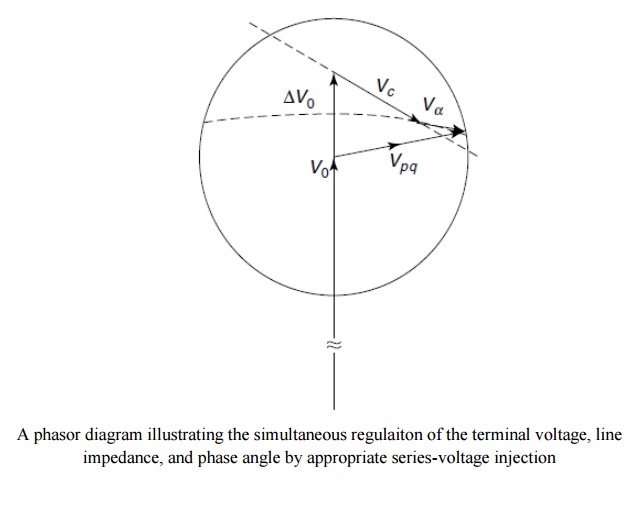 A phasor diagram illustrating the simultaneous regulaiton of the terminal voltage, line impedance, and phase angle by appropriate series-voltage injection

Ø   The power-transmission capability is determined by the transient-stability considerations of the 345-kV line.

Ø   The UPFC is installed in the 138-kV network. A 3-phase-to-ground fault is applied on the 345-kV line for four cycles, and the line is disconnected after the fault.

Ø   The maximum stable power flow possible in the 138-kV line without the UPFC is shown in Fig. to be 176 MW.

Ø   The UPFC also provides very significant damping to power oscillations when it operates at power flows within the operating limits.

Ø   The UPFC response to a 3-phase-line-to-ground fault cleared after four cycles, leaving the 345-kV line in service, is illustrated in Fig. Because the 345-kV line remains intact, the oscillation frequency changes from that shown in Fig.

The steady state investigation of UPFC involves power flow studies which include the calculation of busbar voltage, branch loadings, real and reactive transmission losses and the impact of UPFC. 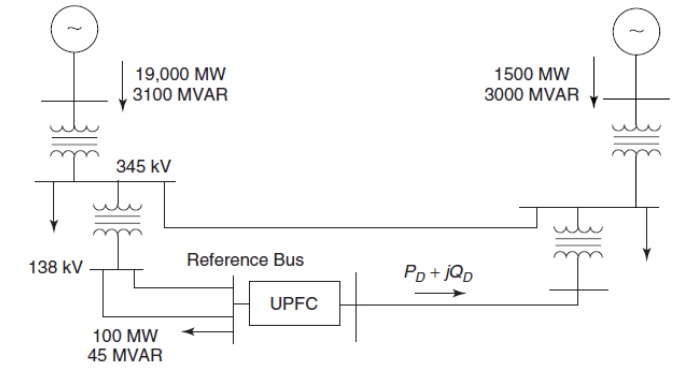 Ø   In this model two voltage sources are used to represent the fundamental components of the PWM controlled output voltage waveform of the two branches in the UPFC.

Ø   The impedance of the two coupling transformers are included in the proposed model and the losses of UPFC deppicts the voltage source equivalent circuit of UPFC.

Ø   The series injection branch a series injection voltage source and performs the main functions of controlling power flow whilst the shunt branch is used to provide real power demanded by the series branch and the losses in the UPFC.

Ø   However in the proposed model the function of reactive compensation of shunt branch is completely neglected.