A spectrophotometer is an instrument which is capable of isolating ‘monochromatic’ radiation ; or that which specifically contains a dispersing element : a prism or a grating.

It is pertinent to mention here that there are a plethora of commercially available spectrophotometers of varying design i.e., single-beam (simple), double-beam (more precise and accurate) and microcomputer controlled built-in-recorder with separate printer ; and obviously having a wide-price-range from Rs 3.0 Lacs to Rs 17.5 Lacs. Evidently, it is practically impossible to describe either all or even a major fraction of, the various spectrophotometers available.

Therefore, in this particular section the following two types of spectrophotometers shall be discussed briefly :

(a) Single-beam Spectrophotometer, and

The desired wavelength is isolated by using a prism or grating and auxiliary mirrors and slits that collectively from a microchromator of the instrument. The wavelength dial on a spectrophotometer is adjusted to a specific value, but the radiation leaving the exit-slit is found to be rarely monochromatic. The schematic diagram of the Beckman Model DU-Spectrophotometer is illustrated in Figure 21.5.

The various components of Figure 21.5 are given below :

Light from the source (A) is focussed on the condensing mirror (B) and directed in a beam to the 45° slit-entrance mirror (C). The slit-entrance mirror subsequently deflects the beam through the adjustable slit and into the monochromator to the collimator mirror (E). As a result the light falling on the collimator mirror is rendered parallel and reflected to the prism (F), where it undergoes refraction. The back surface of the prism is aluminized, so that the light refracted at the first surface is reflected back through the prism, undergoing further refraction as it emerges. The desired wavelength of light is selected by rotating the wave-length selector fixed on top of the monochromator case. This control, in fact, adjusts the position of the prism. The spectrum from the prism is directed back to the collimating mirror which centres the chosen wavelength of light on the slit and the sample (G). Light passing through the sample strikes the phototube (H), causing a voltage to appear across a load-resistor. The voltage is duly amplified and registered on either the strip-chart recorder or the null-meter.

The Milton Roy Spectronic(R)-20 definitely provides a low-cost and easy to operate instrument, that is still capable of achieving absorbance readings accurate to ± 1 or 2%.

Beckman Instruments, one of the pioneers in Analytical Instruments and dominating this field since 50 years, has come up with their latest Beckman DU Series 60 Spectrophotometer, which essentially makes use of two different sources of light, namely :

The quantum leap amalgamated with qualified success in the advancement of Analytical Instruments necessitated for more rapid and precise and accurate measurements in UV and visible spectroscopy. It could be accomplished by the help of the following two cardinal modifications, namely :

(a) Need for a continuous change in wavelength so that light through the blank and through the sample may be monitored continuously, and

(b) Measurements done with a recording spectrophotometer.

The above two modifications have been duly incorporated in a double-beam spectrophotometer. Fig-ure 21.6, depicts the schematic diagram of the optical system involved in a Lambda-2 microcomputer-con-trolled UV-VIS Spectrophotometer (Perkin-Elmer). 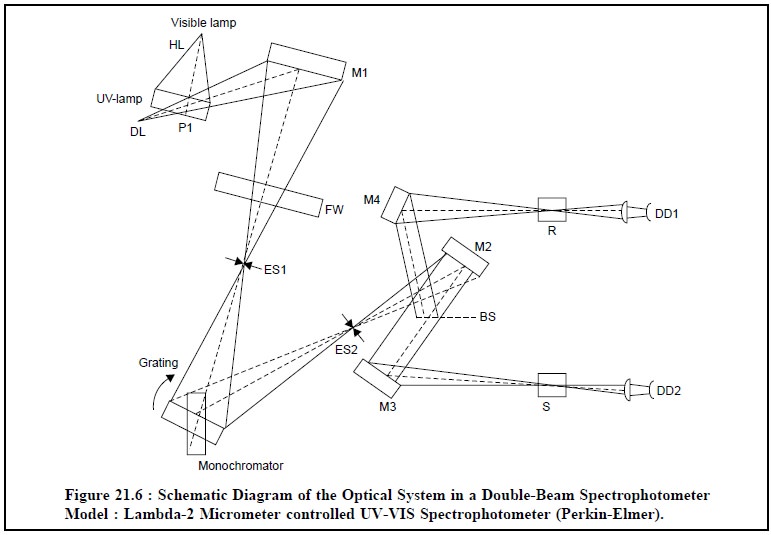 The various components of Figure 21.6 are stated below :

In fact, the source beam is usually split in two different manners, namely :

(a) Separated in Space : In this instance, the source beam is split between the sample cell-path and the reference cell-path, and finally detected by two diode detectors. Here, the two detectors should be adequately matched so that no changes occur relative to each other during the measurements,

(b) Separated in Time : In this case, the source beam is split with the help of an optical chopper which permits the source beam to alternate between the sample cell-path and the reference cell-path. Here, the source should be stable enough so that no changes take place in the radiant energy during the chopping time.

Evidently, the optical choppers are quite expensive, and therefore, the instrument manufacturers very often utilize the separation-in-space method for the routine measurement spectrophotometers.

However, the most sophisticated double-beam spectrophotometer is usually pretty expensive by vir-tue of the following facts, namely :

Double beam spectrophotometers are being manufactured by various well-known manufacturers across the world, such as : SUMADZU ; VARIAN ; CECIL ; BECKMAN ; PERKIN ELMER ; etc., to name a few. These instruments are mostly based on microcomputer-controlled devices with built-in recorder to accom-plish faster speed and greater operating stability.