let us learn about the Ionic bond, Covalent bond and Coordinate bond in this chapter and other types of bond in the higher classes.

All the elements differ with each other in their valence shell electronic configuration. So the way in which they combine to form compounds also differs. Hence, there are different types of chemical bonding possible between atoms which make the molecules. Depending on the type of bond they show different characteristics or properties. Such types of bonding that are considered to exist in molecules are categorized as shown below. Among these, let us learn about the Ionic bond, Covalent bond and Coordinate bond in this chapter and other types of bond in the higher classes.

An ionic bond is a chemical bond formed by the electrostatic attraction between positive and negative ions. The bond is formed between two atoms when one or more electrons are transferred from the valence shell of one atom to the valence shell of the other atom. The atom that loses electrons will form a cation (positive ion) and the atom that gains electrons will form an anion (negative ion). These oppositely charged ions come closer to each other due to electrostatic force of attraction and thus form an ionic bond. As the bond is between the ions, it is called Ionic bond and the attractive forces being electrostatic, the bond is also called Electrostatic bond. Since the valence concept has been explained in terms of electrons, it is also called as Electrovalent bond.

Let us consider two atoms A and B. Let atom A has one electron in excess and atom B has one electron lesser than the stable octet electronic configuration. If atom A transfer one electron to atom B, then both the atoms will acquire stable octet electronic configuration. As the result of this electron transfer, atom A will become positive ion (cation) and atom B will become negative ion (anion). ese oppositely charged ions are held together by electrostatic force of attraction which is called Ionic bond or Electrovalent bond.

In general, ionic bond is formed between a metal and non-metal. The compounds containing ionic bonds are called ionic compounds. Elements of Group 1 and 2 in periodic table, i.e. alkali and alkaline earth metals form ionic compounds when they react with non-metals.

When an atom of sodium combines with an atom of chlorine, an electron is transferred from sodium atom to chlorine atom forming sodium chloride molecule thus both the atoms achieve stable octet electronic configuration. 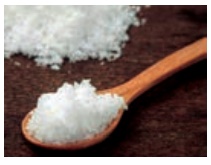 The nature of bonding between the atoms of a molecule is the primary factor that determine the properties of compounds. By this way, in ionic compounds the atoms are held together by a strong electrostatic force that makes the compounds to have its characteristic features as follows:

a. Physical state – ese compounds are formed because of the strong electrostatic force between cations and anions which are arranged in a well-de ned geometrical pattern. us Ionic compounds are crystalline solids at room temperature.

b. Electrical conductivity – Ionic compounds are crystalline solids and so their ions are tightly held together. The ions, therefore, cannot move freely, so they do not conduct electricity in solid state. However, in molten state and their aqueous solutions conduct electricity.

c. Melting point–the strong electrostatic force between the cations and anions hold the ions tightly together, so very high energy is required to separate them. Hence ionic compounds have high melting and boiling points.

e. Density, hardness and brittleness–Ionic compounds have high density and they are quite hard because of the strong electrostatic force between the ions. But they are highly brittle.

Atoms can combine with each other by sharing the unpaired electrons in their outermost shell. Each of the two combining atoms contributes one electron to the electron pair which is needed for the bond formation and has equal claim on the shared electron pair. According to Lewis concept when two atoms form a covalent bond between them, each of the atoms attains the stable electronic configuration of the nearest noble gas. Since the covalent bond is formed because of the sharing of electrons which become common to both the atoms, it is also called as Atomic bond.

Hydrogen molecule is formed by two hydrogen atoms. Each having one valence electron (1s1), it is contributed to the shared pair and both atoms acquire stable completely filled electronic configuration.

Methane molecule is formed by the combination of one carbon and four hydrogen atoms. The carbon atom has four valence electrons (2, 4). ese four electrons are shared with four atoms of hydrogen to achieve a stable electronic configuration (octet) by sharing a pair of electrons.

Oxygen molecule is formed by two oxygen atoms. Each oxygen atom has six valence electrons (2, 6). These two atoms achieve a stable electronic configuration (octet) by sharing two pair of electrons. Hence a double bond is formed in between the two atoms.

Nitrogen molecule is formed by two nitrogen atoms. Each nitrogen atom has five valence electrons (2, 5). These two atoms achieve a stable completely filled electronic configuration (octet) by sharing three pair of electrons. Hence a triple bond is formed in between the two atoms.

As said earlier, the properties of compounds depend on the nature of bonding between their constituent atoms. So the compounds containing covalent bonds possess different characteristics when compared to ionic compounds.

a. Physical state – Depending on force of attraction between covalent molecule the bond may be weaker or stronger. Thus covalent compounds exists in gaseous, liquid and solid form. Eg. Oxygen-gas; Water-liquid: Diamond-solid.

b. Electrical conductivity – Covalent compounds do not contain charged particles (ions), so they are bad conductors of electricity.

e. Hardness and brittleness – Covalent compounds are neither hard nor brittle. But they are soft and waxy.

·           When the size of the cation is small and that of anion is large, the bond is of more covalent character

·           Greater the charge of the cation, greater will be the covalent character

This can be summarized as follows: 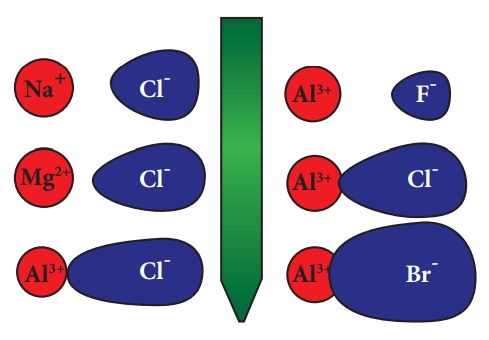 Mostly the lone pair of electrons from an atom in a molecule may be involved in the dative bonding. The atom which provides the electron pair is called donor atom while the other atom which accepts the electron pair is called acceptor atom. The Coordinate covalent bond is represented by an arrow (→ ) which points from the donor to the acceptor atom.

Let us consider two atoms A and B. Let atom A has an unshared lone pair of electrons and atom B is in short of two electrons than the octet in its valence shell. Now atom A donates its lone pair while atom B accepts it. Thus the lone pair of electrons originally belonged to atom A are now shared by both the atoms and the bond formed by this mutual sharing is called Coordinate covalent bond. (A→B)

Ammonium ion is formed by one ammonia (NH3) molecule and one hydrogen (H+) ion. In ammonia molecule the central nitrogen atom has five valence electrons (2,5) among which three electrons are shared with three hydrogen atoms and still it has an unshared lone pair of electrons. This lone pair electrons are donated to a Hydrogen ion and thus a N→H coordinate covalent bond is formed in ammonium ion molecule (NH4+)

a. Physical state – These compounds exist as gases, liquids or solids.

b. Electrical conductivity – Like covalent compounds, coordinate compounds also do not contain charged particles (ions), so they are bad conductors of electricity.