A set consisting of no element is called the empty set or null set or void set.

There is a very special set of great interest: the empty collection ! Why should one care about the empty collection? Consider the set of solutions to the equation x2+1 = 0. It has no elements at all in the set of Real Numbers. Also consider all rectangles with one angle greater than 90 degrees. There is no such rectangle and hence this describes an empty set.

So, the empty set is important, interesting and deserves a special symbol too.

A set consisting of no element is called the empty set or null set or void set.

A set which has only one element is called a singleton set.

A set with finite number of elements is called a finite set. 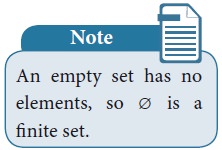 A set which is not finite is called an infinite set.

(ii) The set of all points on a line.

To discuss further about the types of sets, we need to know the cardinality of sets.

Cardinal number of a set :

When a set is finite, it is very useful to know how many elements it has. The number of elements in a set is called the Cardinal number of the set. 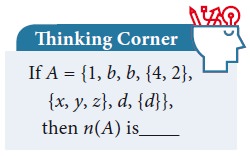 Two finite sets A and B are said to be equivalent if they contain the same number of elements. It is written as A ≈ B. 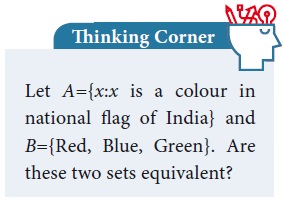 In other words, two sets A and B are said to be equal, if

Since A and B contain exactly the same elements, A and B are equal sets.

A set does not change, if one or more elements of the set are repeated.

For example, if we are given

A and B are equal sets. 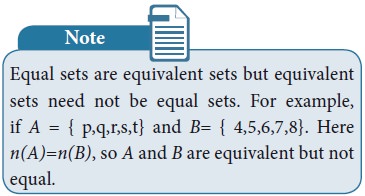 Let A and B be two sets. If every element of A is also an element of B, then A is called a subset of B. We write A ⊆ B.

Since every element of A is also an element of B, the set B must have at least as many elements as A, thus n(A) ≤ n(B).

The other way is also true. Suppose that n(A) > n(B), then A has more elements than B, and hence there is at least one element in A that cannot be in B, so A is not a subset of B. 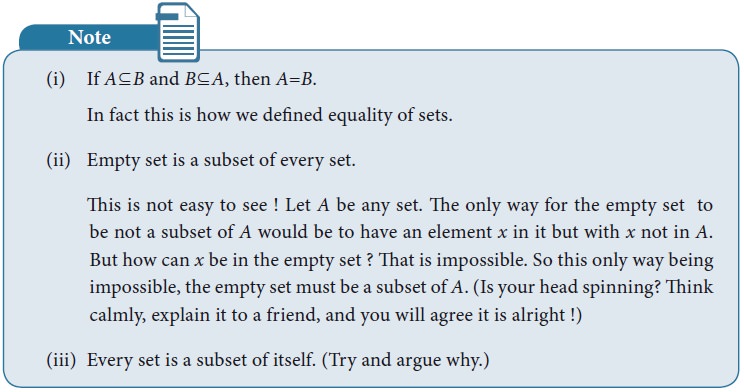 Insert the appropriate symbol ⊂ or ⊈ in each blank to make a true statement.

Since the element p belongs to {p, q, r} but does not belong to

The fun begins when we realise that elements of sets can themselves be sets !

Why bother? There is a particular set of sets that is very interesting.

Let A be any set. Form the set consisting of all subsets of A. Let us call it B. What all sets does B contain? For one thing, A is inside it, since A is a subset of A. The empty set is also a subset of A, so it is in B. If x is in A, then the singleton set {x} is in B. (This means that B has at least as many elements as A; so n(A) is equal to n(B)). For every pair of distinct elements x, y in A, we have {x,y} in B. So yes, B has a lot many sets. It is so rich that it gets a very powerful name !

The set of all subsets of a set A is called the power set of ‘A’. It is denoted by P(A).

The power set of A,

We already noted that n(A) ≤ n[P(A)]. But how big is P(A) ? Think about this a bit, and see whether you come to the following conclusion: