The original numerical control machines were referred to as NC machine tool. They have

“hardwired” control, whereby control is accomplished through the use of punched paper (or plastic) tapes or cards. Tapes tend to wear, and become dirty, thus causing misreadings. Many other problems arise from the use of NC tapes, for example the need to manual reload the NC tapes for each new part and the lack of program editing abilities, which increases the lead time. The end of NC tapes was the result of two competing developments, CNC and DNC.

CNC refers to a system that has a local computer to store all required numerical data. While CNC was used to enhance tapes for a while, they eventually allowed the use of other storage media, magnetic tapes and hard disks. The advantages of CNC systems include but are not limited to the possibility to store and execute a number of large programs (especially if a three or more dimensional machining of complex shapes is considered), to allow editing of programs, to execute cycles of machining commands, etc.

The development of CNC over many years, along with the development of local area networking, has evolved in the modern concept of DNC. Distributed numerical control is similar to CNC, except a remote computer is used to control a number of machines. An off-site mainframe host computer holds programs for all parts to be produced in the DNC facility. Programs are downloaded from the mainframe computer, and then the local controller feeds instructions to the hardwired NC machine.

NC system can be classified on the number of directions of motion they are capable to control simultaneously on a machine tool. Each free body has six degree of freedom, three positive or negative translations along x, y, and z-axis, and three rotations clockwise or counter clockwise about these axes. Commercial NC systems are capable of controlling simultaneously two, two and half, three, four and five degrees of freedom, or axes. The NC systems which control three linear translations (3-axis systems), or three linear translations and one rotation of the worktable (4-axis systems) are the most common.

Although the directions of axes for a particular machine tool are generally agreed as shown in the figure, the coordinate system origin is individual for each part to be machined and has to be decided in the very beginning of the process of CNC part programming.

The two major types of NC systems are (see the figure):

PTP is a NC system, which controls only the position of the components. In this system, the path of the component motion relative to the workpiece is not controlled. The travelling between different positions is performed at the traverse speed allowable for the machine tool and following the shortest way.

Contouring NC systems are capable of controlling not only the positions but also the component motion, i.e., the travelling velocity and the programmed path between the desired positions.

Numerical control (NC) is the automation of machine tools that are operated by precisely programmed commands encoded on a storage medium, as opposed to controlled manually via hand wheels or levers, or mechanically automated via cams alone. Most NC today is computer numerical control (CNC), in which computers play an integral part of the control.

In modern CNC systems, end-to-end component design is highly automated using computer-aided design (CAD) and computer-aided manufacturing (CAM) programs. The programs produce a computer file that is interpreted to extract the commands needed to operate a particular machine via a post processor, and then loaded into the CNC machines for production. Since any particular component might require the use of a number of different tools – drills, saws, etc., modern machines often combine multiple tools into a single "cell". In other installations, a number of different machines are used with an external controller and human or robotic operators that move the component from machine to machine. In either case, the series of steps needed to produce any part is highly automated and produces a part that closely matches the original CAD design. 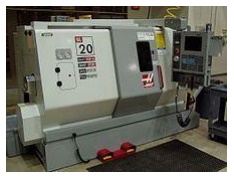 The first NC machines were built in the 1940s and 1950s, based on existing tools that were modified with motors that moved the controls to follow points fed into the system on punched tape. These early servomechanisms were rapidly augmented with analog and digital computers, creating the modern CNC machine tools that have revolutionized the machining processes.

Modern CNC mills differ little in concept from the original model built at MIT in 1952. Mills typically consist of a table that moves in the X and Y axes, and a tool spindle that moves in the Z (depth). The position of the tool is driven by motors through a series of step-down gears in order to provide highly accurate movements, or in modern designs, direct-drive stepper motor or servo motors. Open-loop control works as long as the forces are kept small enough and speeds are not too great. On commercial metalworking machines closed loop controls are standard and required in order to provide the accuracy, speed, and repeatability demanded.

As the controller hardware evolved, the mills themselves also evolved. One change has been to enclose the entire mechanism in a large box as a safety measure, often with additional safety interlocks to ensure the operator is far enough from the working piece for safe operation. Most new CNC systems built today are completely electronically controlled.

CNC-like systems are now used for any process that can be described as a series of movements and operations. These include laser cutting, welding, friction stir welding, ultrasonic welding, flame and plasma cutting, bending, spinning, hole-punching, pinning, gluing, fabric cutting, sewing, tape and fiber placement, routing, picking and placing (PnP), and sawing.

CNC mills use computer controls to cut different materials. They are able to translate programs consisting of specific number and letters to move the spindle to various locations and depths. Many use G-code, which is a standardized programming language that many CNC machines understand, while others use proprietary languages created by their manufacturers. These proprietary languages while often simpler than G-code are not transferable to other machines.

Lathes are machines that cut spinning pieces of metal. CNC lathes are able to make fast, precision cuts using indexable tools and drills with complicated programs for parts that normally cannot be cut on manual lathes. These machines often include 12 tool holders and coolant pumps to cut down on tool wear. CNC lathes have similar control specifications to CNC mills and can often read G-code as well as the manufacturer's proprietary programming language. 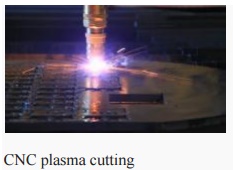 Plasma cutting involves cutting a material using a plasma torch. It is commonly used to cut steel and other metals, but can be used on a variety of materials. In this process, gas (such as compressed air) is blown at high speed out of a nozzle; at the same time an electrical arc is formed through that gas from the nozzle to the surface being cut, turning some of that gas toplasma. The plasma is sufficiently hot to melt the material being cut and moves sufficiently fast to blow molten metal away from the cut.

Electric discharge machining (EDM), sometimes colloquially also referred to as spark machining, spark eroding, burning, die sinking, or wire erosion, is a manufacturing process in which a desired shape is obtained using electrical discharges (sparks). Material is removed from the workpiece by a series of rapidly recurring current discharges between two electrodes, separated by a dielectric fluid and subject to an electric voltage. One of the electrodes is called the tool-electrode, or simply the "tool" or "electrode," while the other is called the workpiece-electrode, or "workpiece."

electrical potential between the two parts. As the electrode approaches the workpiece, dielectric breakdown occurs in the fluid forming a plasma channel) and a small spark jumps.

A water jet cutter, also known as a waterjet, is a tool capable of slicing into metal or other materials (such as granite) by using a jet of water at high velocity and pressure, or a mixture of water and an abrasive substance, such as sand. It is often used during fabrication or manufacture of parts for machinery and other devices. Waterjet is the preferred method when the materials being cut are sensitive to the high temperatures generated by other methods. It has found applications in a diverse number of industries from mining to aerospace where it is used for operations such as cutting, shaping, carving, and reaming.

Other CNC tools:  Many other tools have CNC variants, including: