There are mainly three types of insulator likewise

In addition to that there are other two types of electrical insulator available mainly for low voltage application, e.i. stay insulator and shackle insulator. 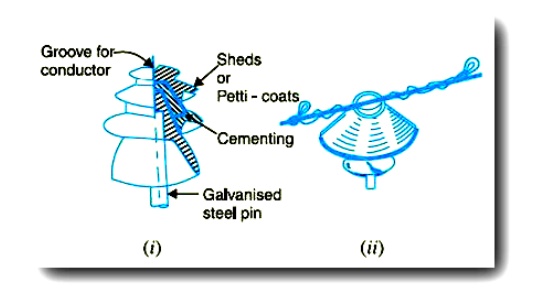 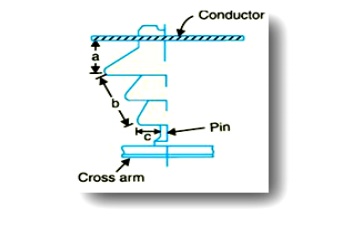 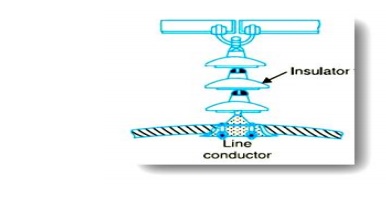 For high voltages (>33 kV), it is a usual practice to use suspension type insulators shown in Figure. Consist of a number of porcelain discs connected in series by metal links in the form of a string. The conductor is suspended at the bottom end of this string while the other end of the string is secured to the cross-arm of the tower. Each unit or disc is designed for low voltage, say 11 kV. The number of discs in series would obviously depend upon the working voltage. For instance, if the working voltage is 66 kV, then six discs in series will be provided on the string.

Each unit or disc of suspension type insulator is designed for low voltage, usually 11 kV. Depending upon the working voltage, the desired number of discs can be connected in series.

If anyone disc is damaged, the whole string does not become useless because the damaged disc can be replaced.

The suspension arrangement provides greater flexibility to the line. The connection at the cross arm is such that insulator string is free to swing in any direction and can take up the position where mechanical stresses are minimum.

In case of increased demand on the transmission line, it is found more satisfactory to supply the greater demand by raising the line voltage than to provide another set of conductors. The additional insulation required for the raised voltage can be easily obtained in the suspension arrangement by adding the desired number of discs.

The suspension type insulators are generally used with steel towers. As the conductors run below the earthed cross-arm of the tower, therefore, this arrangement provides partial protection from lightning. 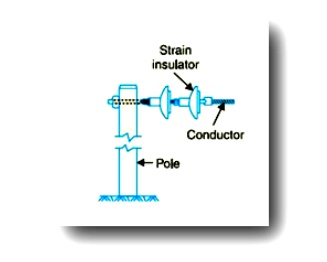 In early days, the shackle insulators were used as strain insulators. But now a day, they are frequently used for low voltage distribution lines. Such insulators can be used either in a horizontal position or in a vertical position. They can be directly fixed to the pole with a bolt or to the cross arm.

For low voltage lines, the stays are to be insulated from ground at a height. The insulator used in the stay wire is called as the stay insulator and is usually of porcelain and is so designed that in case of breakage of the insulator the guy-wire will not fall to the ground. There are several methods of increasing the string efficiency or improving voltage distribution across different units of a string.