The following are the two main methods of grading of cables: (i) Capacitance grading (ii) Intersheath grading

The process of achieving uniform electrostatic stress in the dielectric of cables is known as grading of cables.

It has already been shown that electrostatic stress in a single core cable has a maximum value (gmax) at the conductor surface and goes on decreasing as we move towards the sheath.

The maximum voltage that can be safely applied to a cable depends upon gmax i.e., electrostatic stress at the conductor surface. For safe working of a cable having homogeneous dielectric, the strength of dielectric must be more than gmax .If a dielectric of high strength is used for a cable, it is useful only near the conductor where stress is maximum. But as we move away from the conductor, the electrostatic stress decreases, so the dielectric will be unnecessarily over strong. The unequal stress distribution in a cable is undesirable for two reasons. Firstly, insulation of greater thickness is required which increases the cable size.

Secondly, it may lead to the break down of insulation. In order to overcome above disadvantages, it is necessary to have a uniform stress distribution in cables. This can be achieved by distributing the stress in such a way that its value is increased in the outer layers of dielectric. This is known as grading of cables. The following are the two main methods of grading of cables:

The process of achieving uniformity in the dielectric stress by using layers of different dielectrics is known as capacitance grading. 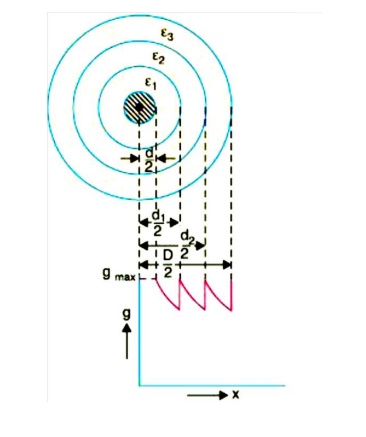 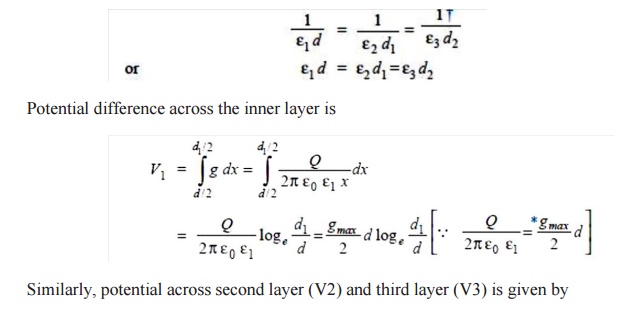 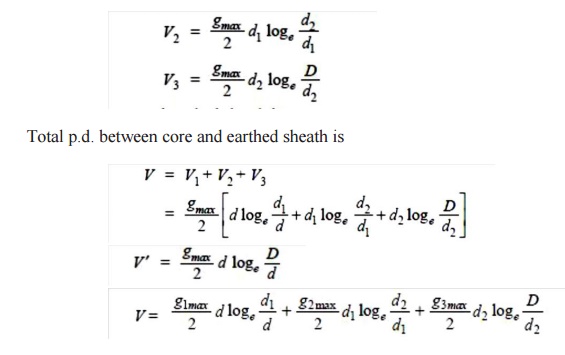 If the cable had homogeneous dielectric, then, for the same values of d, D and gmax, the permissible potential difference between core and earthed sheath would have been

In this method of cable grading, a homogeneous dielectric is used, but it is divided into various layers by placing metallic inters heaths between the core and lead sheath. The inter sheaths are held at suitable potentials which are in between the core potential and earth potential. This arrangement improves voltage distribution in the dielectric of the cable and consequently more uniform potential gradient is obtained. 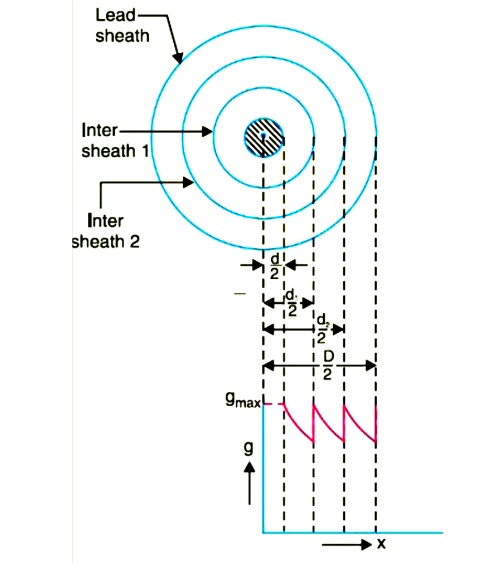 Consider a cable of core diameter d and outer lead sheath of diameter D. Suppose that two inters heaths of diameters d1 and d2 are inserted into the homogeneous dielectric and maintained at some fixed potentials. Let V1,V2 and V3 respectively be the voltage between core and intersheath 1, between inter sheath 1 and 2 and between inter sheath 2 and outer lead sheath. As there is a definite potential difference between the inner and outer layers of each inter sheath, therefore, each sheath can be treated like a homogeneous single core cable Maximum stress between core and inter sheath 1 is

Since the dielectric is homogeneous, the maximum stress in each layer is the same i.e.,

As the cable behaves like three capacitors in series, therefore, all the potentials are in phase i.e. Voltage between conductor and earthed lead sheath is

(ii)             they are separated bya dielectric of permittivity much greater than that of air. 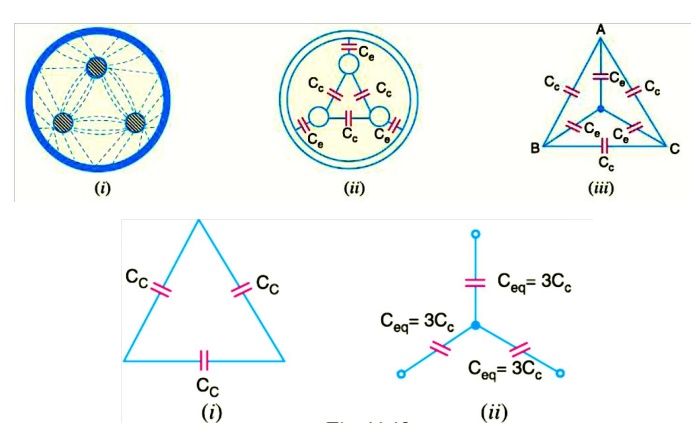 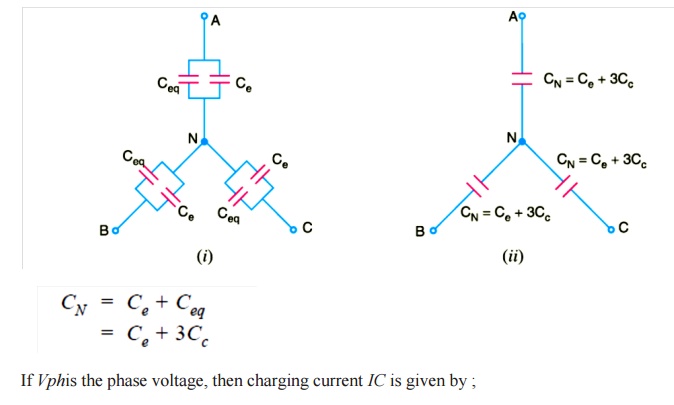