In general, epidemiological studies are designed to find associa-tions between exposures and health outcomes. 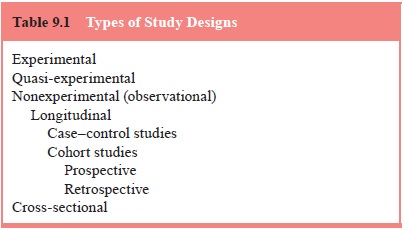 The main distinction of experimental studies is that the investiga-tor assigns the status of exposure or nonexposure to each subject. The assignment to the exposure group becomes part of the study protocol. Once subjects are assigned to exposed or nonexposed groups, they are observed for a time, and observations about changes in morbidity are recorded. The most common experi-mental design is the clinical trial, in which clinical populations are exposed to a specific treatment protocol to measure an out-come, usually resolution of symptoms. To ensure the integrity of a clinical trial, three main elements are necessary (Miettinen, 1985): 1) “randomization”, to ensure comparability of the popu-lations; 2) “placebo”, to ensure comparability of the effects; and 3) “blinding”, to ensure comparability of information.

In randomization, subjects are randomly assigned to dif-ferent exposure groups to attempt to ensure that subjects in each group have similar clinical and demographic characteristics. Randomization should theoretically achieve a balance of un-known factors in the different groups.

To control comparability of extraneous effects of a specified treatment, experimental studies use placebo-controlled groups. A placebo controls for factors that may affect the outcome of the study independently of the exposure status. For example, if sub-jects in an open trial are aware of what medication they receive, this knowledge could bias their response to the treatment. Simi-larly, subjects who are aware of being in an untreated control group could respond over time in a biased fashion. Thus, one goal in as-signing patients at random to treatment or placebo-control groups is to minimize observation bias. In a single-blind study, only the patient is unaware of the actual treatment. In a double-blind study, the investigator and the subject of investigation are unaware of treatment assignment. In a triple-blind study, the data analyst is also not informed of the meaning of the group assignment code.

Natural experiments that permit comparisons of two populations, one that receives an exposure and the other that does not, are re-ferred to as quasi-experimental studies. To be considered quasi-experimental, baseline data must have been collected before the exposure event. Without that requirement, the study is simply a retrospective observational study

Nonexperimental studies are divided into cross-sectional and longitudinal designs

Cross-sectional designs are typically employed in surveys aimed at providing data on the distribution of disorders in the popula-tion. Differences in rates by basic demographic data are also usu-ally derived. In epidemiology, cross-sectional designs are usually best employed when causal hypotheses are not being tested. For example, when a community wants to investigate the distribu-tion of an illness to decide on the need for psychiatric services, a cross-sectional survey is highly appropriate

Longitudinal designs are divided into case–control and cohort studies and are characterized by a time interval between cause and effect. In cross-sectional studies, there is no interval between exposure and illness, which are measured at the same point in time.

Case–Control Studies. In case–control studies, subjects are defined in terms of having (case patients) or not having (controlpatients) the disease of interest. The groups are compared in terms of history of exposure. In general, two types of control groups are used: hospital control groups and population control groups. The selection of the control group is a key point in terms of validity. Control subjects should be selected independently of exposure status. Case and control patients may be matched on different characteristics, the key issue being that control patients should represent those individuals who, if they had the disease, would be selected as case patients (Miettinen, 1985).

Case–control studies can assess whether a risk factor is more prevalent in case than in control patients but may not be able to establish the rate of disease after exposure to that risk factor. For the purpose of estimating the true rate of disease as-sociated with an exposure, the prospective cohort study design is the preferable methodology.

For comparison groups, a cohort study can use an internal subset of the population under study, by comparing exposed with unexposed members of the cohort, or an external comparison. A comparison cohort can be selected from a similarly defined population.

The major strength of the cohort design is the possibility of estimating a temporal relationship between exposure and dis-ease. With a cohort study, it is possible to study rare exposures and to evaluate multiple outcomes from a single exposure. The limitation of cohort studies is primarily one of feasibility because most such studies are expensive and involve study populations who are difficult to recruit and maintain for follow-up