Because the ECA study was conducted in five specific sites, each selected because it contained unique population characteristics.

Because the ECA study was conducted in five specific sites, each selected because it contained unique population characteristics. the findings could not be readily extrapolated to the USA as a whole. Therefore, the NCS was designed to estimate the prevalence and comorbidity of psychiatric and substance use dis-orders in the mainland USA. The NCS was designed by Kessler and colleagues (1994) as the first population-based study admin-istered to a nationally representative sample in the USA using astructured diagnostic interview. It built upon a history of con-ducting (second-generation) national studies of the prevalence of psychiatric symptoms in the USA at the University of Michigan. The NCS also built on the knowledge and experience of the ECA study. Among its many advantages, it uniformly included a set of demographic and psychosocial risk factors. 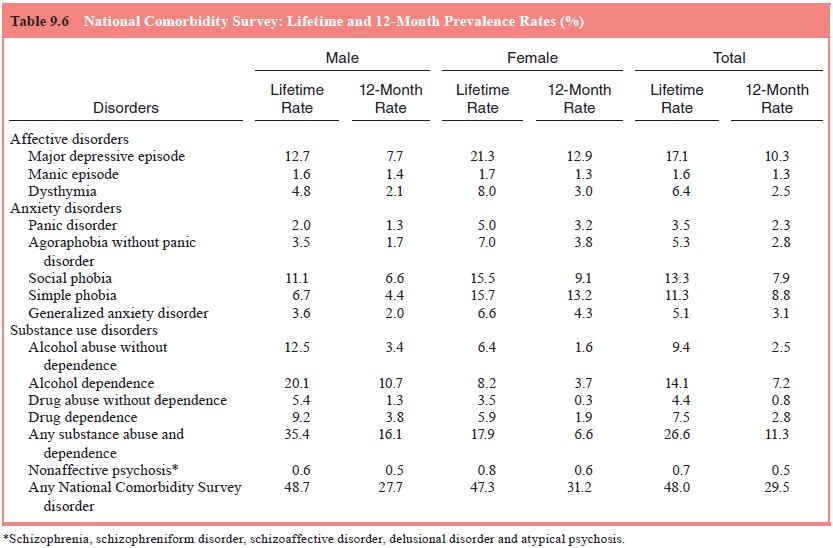 The NCS also yielded important data on demographic correlates and potential risk factors for mental disorders. Several earlier patterns of association observed for gender and other character-istics were confirmed.

Use of Mental Health Services

The NCS also examined the patterns of use of health services by the respondents. Only 40% of individuals with a mental dis-order ever received professional care, and only 25% received their care in the mental health specialty sector. On the other hand, 60% of individuals with three or more comorbid dis-orders received professional help, 40% in the mental health specialty sector. Furthermore, one third of persons with three or more comorbid disorders received professional help in the past year compared with only 20% of those with one disorder. These findings indicate that the use of health services is con-centrated in the segment of the population with a high degree of comorbidity.

Subsequent analyses of service utilization in the NCS have shed light on the magnitude and potential determinants of impor-tant subcomponents of the problem of unmet needs for mental health treatment. For example, while only a minority with ac-tive major depression received any care in the prior year, an even smaller percentage (7%) received treatment that could be consid-ered minimally adequate (Katz et al., 1998). Even among the ex-tremely vulnerable and impaired population that met criteria for active serious mental illness (SMI), only 40% received any treat-ment in the prior year (Kessler et al., 2001) and only 15% received care that could be considered minimally adequate (Wang et al., 2002). Among NCS respondents with mental disorders who re-ceived treatment in the prior year, 19% dropped out prematurely (Edlund et al., 2002).

The NCS will continue to yield important new findings in the future, though a new series of landmark studies are currently in the field (Kessler and Walters, 2002). In one ongoing component of this research, the National Comorbidity Survey-2 (NCS-2), the baseline NCS respondents were reinterviewed a decade later. When linked with the prospectively-collected data that respond-ents had provided in the baseline NCS, the NCS-2 will be an important source of information on the patterns and predictors of the course of mental disorders. The NCS-2 will also provide investigators with the ability to study the effects of primary dis-orders on the development and course of secondary disorders. An additional survey with a new national sample of 10 000 respond-ents, the national comorbidity survey-replication (NCS-R), is also being conducted together with the NCS-2. The NCS-R data will provide much needed data on temporal changes that may have occurred in the past decade. The tremendous utility of such analy-ses is perhaps best illustrated in mental health services research, where the last decade has seen dramatic changes in treatments and service delivery systems, yet the impact of these changes on unmet needs for treatment remains largely unknown. A survey is also being conducted among 10 000 adolescents, the NCS-A, and will yield much needed information on the occurrence and correlates of mental disorders in this population. Finally, as part of the WHO WMH (Womens Health and Gender) 2000 initia-tive, the NCS-R is being administered as parallel community epidemiological survey in over 20 developing as well developed countries throughout the world. The cross-national comparisons made possible by these surveys will provide a unique look at the occurrence, burdens and patterns of treatment for mental disor-ders around the globe.