The types of EDI were constructed based on how EDI communication connections and the conversion were organized.

The types of EDI were constructed based on how EDI communication connections and the conversion were organized. Thus based on the medium used for transmitting EDI documents the following are the major EDI types.

It is also called as Point-to-Point EDI. It establishes a direct connection between various business stakeholders and partners individually. This type of EDI suits to larger businesses with a lot of day to day business transactions.

EDI via VAN (Value Added Network) is where EDI documents are transferred with the support of third party network service providers. Many businesses prefer this network model to protect them from the updating ongoing complexities of network technologies. See Figure 18.2 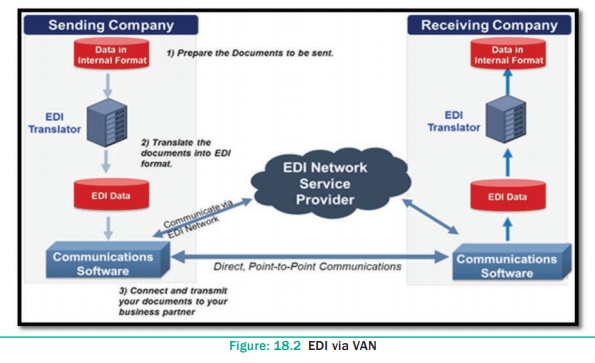 When protocols like FTP/VPN, SFTP and FTPS are used for exchange of EDI based documents through the Internet or Intranet it is called as EDI via FTP/VPN, SFTP, FTPS.

Web based EDI conducts EDI using an web browser via the Internet. Here the businesses are allowed to use any browser to transfer data to their business partners. Web based EDI is easy and convenient for small and medium organizations.

When smartphones or other such handheld devices are used to transfer EDI documents it is called as mobile EDI. Mobile EDI applications considerably increase the speed of EDI transactions.