The term distributed database management system can describe various systems that differ from one another in many respects. The main thing that all such systems have in common is the fact that data and software are distributed over multiple sites con-nected by some form of communication network. In this section we discuss a number of types of DDBMSs and the criteria and factors that make some of these systems different.

Figure 25.2 shows classification of DDBMS alternatives along orthogonal axes of distribution, autonomy, and heterogeneity. For a centralized database, there is complete autonomy, but a total lack of distribution and heterogeneity (Point A in the figure). We see that the degree of local autonomy provides further ground for classification into federated and multidatabase systems. At one extreme of the autonomy spectrum, we have a DDBMS that looks like a centralized DBMS to the user, with zero autonomy (Point B). A single conceptual schema exists, and all access to the system is obtained through a site that is part of the DDBMS—which means that no local autonomy exists. Along the autonomy axis we encounter two types of DDBMSs called federated database system (Point C) and multidatabase system

(Point D). In such systems, each server is an independent and autonomous centralized DBMS that has its own local users, local transactions, and DBA, and hence has 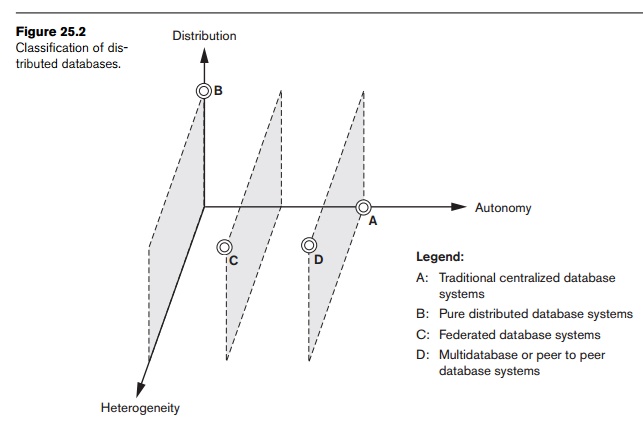 a very high degree of local autonomy. The term federated database system (FDBS) is used when there is some global view or schema of the federation of databases that is shared by the applications (Point C). On the other hand, a multidatabase system has full local autonomy in that it does not have a global schema but interactively constructs one as needed by the application (Point D).3 Both systems are hybrids between distributed and centralized systems, and the distinction we made between them is not strictly followed. We will refer to them as FDBSs in a generic sense. Point D in the diagram may also stand for a system with full local autonomy and full heterogeneity—this could be a peer-to-peer database system (see Section 25.9.2). In a heterogeneous FDBS, one server may be a relational DBMS, another a network DBMS (such as Computer Associates’ IDMS or HP’S IMAGE/3000), and a third an object DBMS (such as Object Design’s ObjectStore) or hierarchical DBMS (such as IBM’s IMS); in such a case, it is necessary to have a canonical system language and to include language translators to translate subqueries from the canonical language to the language of each server.

We briefly discuss the issues affecting the design of FDBSs next.

The type of heterogeneity present in FDBSs may arise from several sources. We dis-cuss these sources first and then point out how the different types of autonomies contribute to a semantic heterogeneity that must be resolved in a heterogeneous FDBS.

Differences in data models. Databases in an organization come from a vari-ety of data models, including the so-called legacy models (hierarchical and network, see Web Appendixes D and E), the relational data model, the object data model, and even files. The modeling capabilities of the models vary. Hence, to deal with them uniformly via a single global schema or to process them in a single language is challenging. Even if two databases are both from the RDBMS environment, the same information may be represented as an attribute name, as a relation name, or as a value in different databases. This calls for an intelligent query-processing mechanism that can relate informa-tion based on metadata.

Differences in query languages. Even with the same data model, the languages and their versions vary. For example, SQL has multiple versions like SQL-89, SQL-92, SQL-99, and SQL:2008, and each system has its own set of data types, comparison operators, string manipulation features, and so on.

Semantic Heterogeneity. Semantic heterogeneity occurs when there are differences in the meaning, interpretation, and intended use of the same or related data. Semantic heterogeneity among component database systems (DBSs) creates the biggest hurdle in designing global schemas of heterogeneous databases. The design autonomy of component DBSs refers to their freedom of choosing the following design parameters, which in turn affect the eventual complexity of the FDBS:

The universe of discourse from which the data is drawn. For example, for two customer accounts, databases in the federation may be from the United States and Japan and have entirely different sets of attributes about customer accounts required by the accounting practices. Currency rate fluctuations would also present a problem. Hence, relations in these two databases that have identical names—CUSTOMER or ACCOUNT—may have some common and some entirely distinct information.

The understanding, meaning, and subjective interpretation of data. This is a chief contributor to semantic heterogeneity.

Transaction and policy constraints. These deal with serializability criteria, compensating transactions, and other transaction policies.

Derivation of summaries. Aggregation, summarization, and other data-processing features and operations supported by the system.

The above problems related to semantic heterogeneity are being faced by all major multinational and governmental organizations in all application areas. In today’s commercial environment, most enterprises are resorting to heterogeneous FDBSs, having heavily invested in the development of individual database systems using diverse data models on different platforms over the last 20 to 30 years. Enterprises are using various forms of software—typically called the middleware, or Web-based packages called application servers (for example, WebLogic or WebSphere) and even generic systems, called Enterprise Resource Planning (ERP) systems (for example, SAP, J. D. Edwards ERP)—to manage the transport of queries and transactions from the global application to individual databases (with possible additional processing for business rules) and the data from the heterogeneous database servers to the global application. Detailed discussion of these types of software systems is outside the scope of this book.