In this section we discuss techniques that are used to break up the database into logical units, called fragments, which may be assigned for storage at the various sites. We also discuss the use of data replication, which permits certain data to be stored in more than one site, and the process of allocating fragments—or replicas of fragments—for storage at the various sites. These techniques are used during the process of distributed database design. The information concerning data fragmentation, allocation, and replication is stored in a global directory that is accessed by the DDBS applications as needed.

In a DDB, decisions must be made regarding which site should be used to store which portions of the database. For now, we will assume that there is no replication; that is, each relation—or portion of a relation—is stored at one site only. We discuss replication and its effects later in this section. We also use the terminology of relational databases, but similar concepts apply to other data models. We assume that we are starting with a relational database schema and must decide on how to dis-tribute the relations over the various sites. To illustrate our discussion, we use the relational database schema in Figure 3.5.

DEPARTMENT, PROJECT, WORKS_ON, and DEPENDENT in Figure 3.5. In many cases, however, a relation can be divided into smaller logical units for distribution. For example, consider the company database shown in Figure 3.6, and assume there are three computer sites—one for each department in the company.

We may want to store the database information relating to each department at the computer site for that department. A technique called horizontal fragmentation can be used to partition each relation by department.

Horizontal Fragmentation. A horizontal fragment of a relation is a subset of the tuples in that relation. The tuples that belong to the horizontal fragment are specified by a condition on one or more attributes of the relation. Often, only a sin-gle attribute is involved. For example, we may define three horizontal fragments on the EMPLOYEE relation in Figure 3.6 with the following conditions: (Dno = 5), (Dno = 4), and (Dno = 1)—each fragment contains the EMPLOYEE tuples working for a particular department. Similarly, we may define three horizontal fragments for the PROJECT relation, with the conditions (Dnum = 5), (Dnum = 4), and (Dnum = 1)—each fragment contains the PROJECT tuples controlled by a particular department. Horizontal fragmentation divides a relation horizontally by grouping rows to create subsets of tuples, where each subset has a certain logical meaning. These fragments can then be assigned to different sites in the distributed system. Derived horizontal fragmentation applies the partitioning of a primary relation (DEPARTMENT in our example) to other secondary relations (EMPLOYEE and PROJECT in our example), which are related to the primary via a foreign key. This way, related data between the primary and the secondary relations gets fragmented in the same way.

Two horizontal fragments that are neither complete nor disjoint are those defined on the EMPLOYEE relation in Figure 3.5 by the conditions (Salary > 50000) and (Dno = 4); they may not include all EMPLOYEE tuples, and they may include common tuples. Two vertical fragments that are not complete are those defined by the attribute lists L1 = {Name, Address} and L2 = {Ssn, Name, Salary}; these lists violate both conditions of a complete vertical fragmentation.

Mixed (Hybrid) Fragmentation. We can intermix the two types of fragmentation, yielding a mixed fragmentation. For example, we may combine the horizon-tal and vertical fragmentations of the EMPLOYEE relation given earlier into a mixed fragmentation that includes six fragments. In this case, the original relation can be reconstructed by applying UNION and OUTER UNION (or OUTER JOIN) operations in the appropriate order. In general, a fragment of a relation R can be specified by a SELECT-PROJECT combination of operations πL(σC(R)). If

A fragmentation schema of a database is a definition of a set of fragments that includes all attributes and tuples in the database and satisfies the condition that the whole database can be reconstructed from the fragments by applying some sequence of OUTER UNION (or OUTER JOIN) and UNION operations. It is also sometimes useful—although not necessary—to have all the fragments be disjoint except for the repetition of primary keys among vertical (or mixed) fragments. In the latter case, all replication and distribution of fragments is clearly specified at a subsequent stage, separately from fragmentation.

An allocation schema describes the allocation of fragments to sites of the DDBS; hence, it is a mapping that specifies for each fragment the site(s) at which it is stored. If a fragment is stored at more than one site, it is said to be replicated. We discuss data replication and allocation next.

Replication is useful in improving the availability of data. The most extreme case is replication of the whole database at every site in the distributed system, thus creating a fully replicated distributed database. This can improve availability remarkably because the system can continue to operate as long as at least one site is up. It also improves performance of retrieval for global queries because the results of such queries can be obtained locally from any one site; hence, a retrieval query can be processed at the local site where it is submitted, if that site includes a server module. The disadvantage of full replication is that it can slow down update operations drastically, since a single logical update must be performed on every copy of the database to keep the copies consistent. This is especially true if many copies of the database exist. Full replication makes the concurrency control and recovery techniques more expensive than they would be if there was no replication, as we will see in Section 25.7.

The other extreme from full replication involves having no replication—that is, each fragment is stored at exactly one site. In this case, all fragments must be dis-joint, except for the repetition of primary keys among vertical (or mixed) fragments. This is also called nonredundant allocation.

Between these two extremes, we have a wide spectrum of partial replication of the data—that is, some fragments of the database may be replicated whereas others may not. The number of copies of each fragment can range from one up to the total number of sites in the distributed system. A special case of partial replication is occurring heavily in applications where mobile workers—such as sales forces, financial plan-ners, and claims adjustors—carry partially replicated databases with them on laptops and PDAs and synchronize them periodically with the server database.7 A descrip-tion of the replication of fragments is sometimes called a replication schema.

Each fragment—or each copy of a fragment—must be assigned to a particular site in the distributed system. This process is called data distribution (or data allocation). The choice of sites and the degree of replication depend on the performance and availability goals of the system and on the types and frequencies of transactions submitted at each site. For example, if high availability is required, transactions can be submitted at any site, and most transactions are retrieval only, a fully replicated database is a good choice. However, if certain transactions that access particular parts of the database are mostly submitted at a particular site, the corresponding set of fragments can be allocated at that site only. Data that is accessed at multiple sites can be replicated at those sites. If many updates are performed, it may be useful to limit replication. Finding an optimal or even a good solution to distributed data allocation is a complex optimization problem.

3. Example of Fragmentation, Allocation, and Replication

We now consider an example of fragmenting and distributing the company data-base in Figures 3.5 and 3.6. Suppose that the company has three computer sites— one for each current department. Sites 2 and 3 are for departments 5 and 4, respectively. At each of these sites, we expect frequent access to the EMPLOYEE and PROJECT information for the employees who work in that department and the proj-ects controlled by that department. Further, we assume that these sites mainly access the Name, Ssn, Salary, and Super_ssn attributes of EMPLOYEE. Site 1 is used by company headquarters and accesses all employee and project information regularly, in addition to keeping track of DEPENDENT information for insurance purposes.

According to these requirements, the whole database in Figure 3.6 can be stored at site 1. To determine the fragments to be replicated at sites 2 and 3, first we can horizontally fragment DEPARTMENT by its key Dnumber. Then we apply derived fragmentation to the EMPLOYEE, PROJECT, and DEPT_LOCATIONS relations based on their foreign keys for department number—called Dno, Dnum, and Dnumber, respec-tively, in Figure 3.5. We can vertically fragment the resulting EMPLOYEE fragments to include only the attributes {Name, Ssn, Salary, Super_ssn, Dno}. Figure 25.8 shows the mixed fragments EMPD_5 and EMPD_4, which include the EMPLOYEE tuples satisfying the conditions Dno = 5 and Dno = 4, respectively. The horizontal fragments of PROJECT, DEPARTMENT, and DEPT_LOCATIONS are similarly fragmented by department number. All these fragments—stored at sites 2 and 3—are replicated because they are also stored at headquarters—site 1. 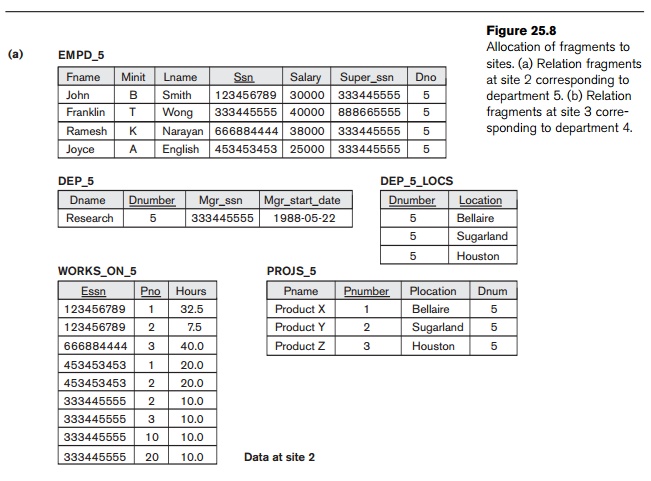 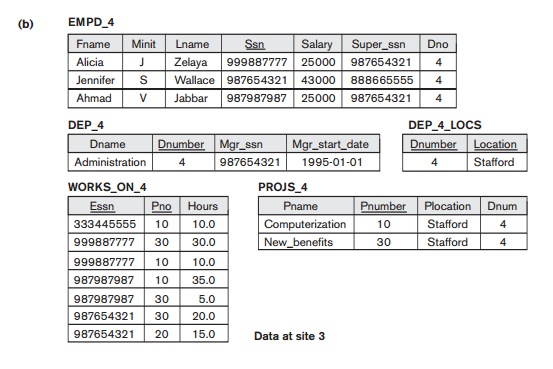 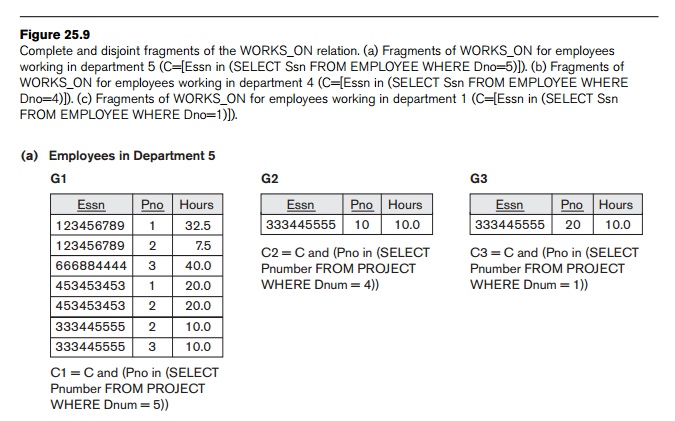 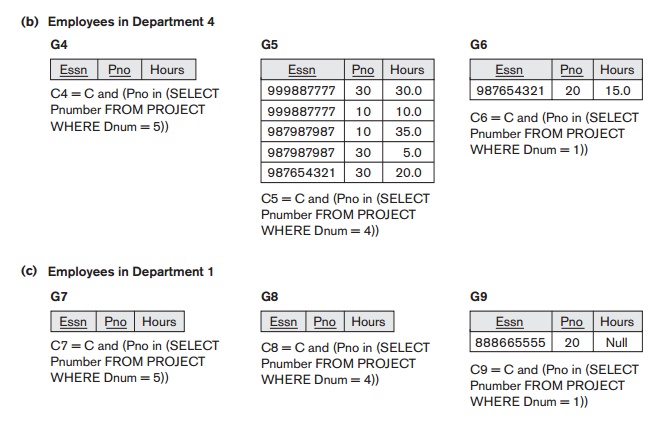