Distributed databases are different from Internet Web files. Web pages are basically a very large collection of files stored on different nodes in a network—the Internet—with interrelationships among the files represented via hyperlinks. The common functions of database management, including uniform query processing and transaction processing, do not apply to this scenario yet. The technology is, however, moving in a direction such that distributed World Wide Web (WWW) databases will become a reality in the future. We have discussed some of the issues of accessing databases on the Web in Chapters 12 and 14. The proliferation of data at millions of Websites in various forms does not qualify as a DDB by the definition given earlier.

1. Differences between DDB and Multiprocessor Systems

We need to distinguish distributed databases from multiprocessor systems that use shared storage (primary memory or disk). For a database to be called distributed, the following minimum conditions should be satisfied:

Connection of database nodes over a computer network. There are multi-ple computers, called sites or nodes. These sites must be connected by an underlying communication network to transmit data and commands among sites, as shown later in Figure 25.3(c).

Logical interrelation of the connected databases. It is essential that the information in the databases be logically related.

Absence of homogeneity constraint among connected nodes. It is not nec-essary that all nodes be identical in terms of data, hardware, and software.

Networks may have different topologies that define the direct communication paths among sites. The type and topology of the network used may have a significant impact on the performance and hence on the strategies for distributed query processing and distributed database design. For high-level architectural issues, how-ever, it does not matter what type of network is used; what matters is that each site be able to communicate, directly or indirectly, with every other site. For the remainder of this chapter, we assume that some type of communication network exists among sites, regardless of any particular topology. We will not address any network-specific issues, although it is important to understand that for an efficient operation of a distributed database system (DDBS), network design and performance issues are critical and are an integral part of the overall solution. The details of the under-lying communication network are invisible to the end user.

The concept of transparency extends the general idea of hiding implementation details from end users. A highly transparent system offers a lot of flexibility to the end user/application developer since it requires little or no awareness of underlying details on their part. In the case of a traditional centralized database, transparency simply pertains to logical and physical data independence for application developers. However, in a DDB scenario, the data and software are distributed over multiple sites connected by a computer network, so additional types of transparencies are introduced.

Consider the company database in Figure 3.5 that we have been discussing through-out the book. The EMPLOYEE, PROJECT, and WORKS_ON tables may be fragmented horizontally (that is, into sets of rows, as we will discuss in Section 25.4) and stored with possible replication as shown in Figure 25.1. The following types of transparencies are possible: 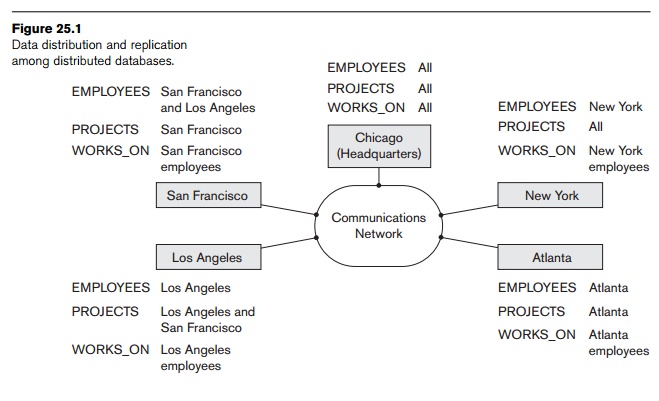 that are subsets of the tuples (rows) in the original relation. Vertical fragmentation distributes a relation into subrelations where each subrelation is defined by a subset of the columns of the original relation. A global query by the user must be transformed into several fragment queries. Fragmentation transparency makes the user unaware of the existence of fragments.

Other transparencies include design transparency and execution transparency—referring to freedom from knowing how the distributed database is designed and where a transaction executes.

Autonomy determines the extent to which individual nodes or DBs in a connected DDB can operate independently. A high degree of autonomy is desirable for increased flexibility and customized maintenance of an individual node. Autonomy can be applied to design, communication, and execution. Design autonomy refers to independence of data model usage and transaction management techniques among nodes. Communication autonomy determines the extent to which each node can decide on sharing of information with other nodes. Execution autonomy refers to independence of users to act as they please.

Reliability and availability are two of the most common potential advantages cited for distributed databases. Reliability is broadly defined as the probability that a system is running (not down) at a certain time point, whereas availability is the prob-ability that the system is continuously available during a time interval. We can directly relate reliability and availability of the database to the faults, errors, and failures associated with it. A failure can be described as a deviation of a system’s behavior from that which is specified in order to ensure correct execution of operations. Errors constitute that subset of system states that causes the failure. Fault is the cause of an error.

To construct a system that is reliable, we can adopt several approaches. One common approach stresses fault tolerance; it recognizes that faults will occur, and designs mechanisms that can detect and remove faults before they can result in a system failure. Another more stringent approach attempts to ensure that the final system does not contain any faults. This is done through an exhaustive design process followed by extensive quality control and testing. A reliable DDBMS tolerates failures of underlying components and processes user requests so long as data-base consistency is not violated. A DDBMS recovery manager has to deal with failures arising from transactions, hardware, and communication networks. Hardware failures can either be those that result in loss of main memory contents or loss of secondary storage contents. Communication failures occur due to errors associated with messages and line failures. Message errors can include their loss, corruption, or out-of-order arrival at destination.

Organizations resort to distributed database management for various reasons. Some important advantages are listed below.

Improved ease and flexibility of application development. Developing and maintaining applications at geographically distributed sites of an organization is facilitated owing to transparency of data distribution and control.

Increased reliability and availability. This is achieved by the isolation of faults to their site of origin without affecting the other databases connected to the network. When the data and DDBMS software are distributed over several sites, one site may fail while other sites continue to operate. Only the data and software that exist at the failed site cannot be accessed. This improves both reliability and availability. Further improvement is achieved by judiciously replicating data and software at more than one site. In a centralized system, failure at a single site makes the whole system unavailable to all users. In a distributed database, some of the data may be unreachable, but users may still be able to access other parts of the database. If the data in the failed site had been replicated at another site prior to the failure, then the user will not be affected at all.

Improved performance. A distributed DBMS fragments the database by keeping the data closer to where it is needed most. Data localization reduces the contention for CPU and I/O services and simultaneously reduces access delays involved in wide area networks. When a large database is distributed over multiple sites, smaller databases exist at each site. As a result, local queries and transactions accessing data at a single site have better performance because of the smaller local databases. In addition, each site has a smaller number of transactions executing than if all transactions are submit-ted to a single centralized database. Moreover, interquery and intraquery parallelism can be achieved by executing multiple queries at different sites, or by breaking up a query into a number of subqueries that execute in parallel. This contributes to improved performance.

Easier expansion. In a distributed environment, expansion of the system in terms of adding more data, increasing database sizes, or adding more processors is much easier.

The transparencies we discussed in Section 25.1.2 lead to a compromise between ease of use and the overhead cost of providing transparency. Total transparency provides the global user with a view of the entire DDBS as if it is a single centralized system. Transparency is provided as a complement to autonomy, which gives the users tighter control over local databases. Transparency features may be implemented as a part of the user language, which may translate the required services into appropriate operations. Additionally, transparency impacts the features that must be provided by the operating system and the DBMS.

Distribution leads to increased complexity in the system design and implementation. To achieve the potential advantages listed previously, the DDBMS software must be able to provide the following functions in addition to those of a centralized DBMS:

Distributed query processing. The ability to access remote sites and transmit queries and data among the various sites via a communication network.

Distributed transaction management. The ability to devise execution strategies for queries and transactions that access data from more than one site and to synchronize the access to distributed data and maintain the integrity of the overall database.

Distributed database recovery. The ability to recover from individual site crashes and from new types of failures, such as the failure of communication links.

Security. Distributed transactions must be executed with the proper management of the security of the data and the authorization/access privileges of users.

Distributed directory (catalog) management. A directory contains information (metadata) about data in the database. The directory may be global for the entire DDB, or local for each site. The placement and distribution of the directory are design and policy issues.

These functions themselves increase the complexity of a DDBMS over a centralized DBMS. Before we can realize the full potential advantages of distribution, we must find satisfactory solutions to these design issues and problems. Including all this additional functionality is hard to accomplish, and finding optimal solutions is a step beyond that.