There are two main types of multiprocessor system architectures that are common-place: 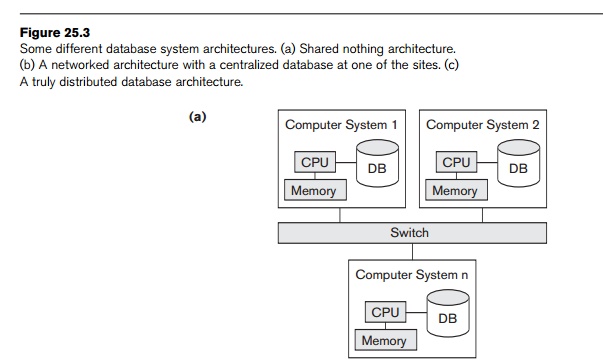 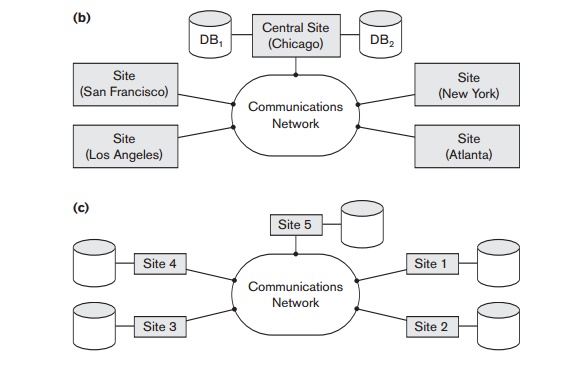 In this section we discuss both the logical and component architectural models of a DDB. In Figure 25.4, which describes the generic schema architecture of a DDB, the enterprise is presented with a consistent, unified view showing the logical structure of underlying data across all nodes. This view is represented by the global conceptual schema (GCS), which provides network transparency (see Section 25.1.2). To accommodate potential heterogeneity in the DDB, each node is shown as having its own local internal schema (LIS) based on physical organization details at that particular site. The logical organization of data at each site is specified by the local conceptual schema (LCS). The GCS, LCS, and their underlying mappings provide the fragmentation and replication transparency discussed in Section 25.1.2. Figure 25.5 shows the component architecture of a DDB. It is an extension of its centralized counterpart (Figure 2.3) in Chapter 2. For the sake of simplicity, common elements are not shown here. The global query compiler references the global conceptual schema from the global system catalog to verify and impose defined constraints. The global query optimizer references both global and local conceptual schemas and generates optimized local queries from global queries. It evaluates all candidate strategies using a cost function that estimates cost based on response time (CPU, 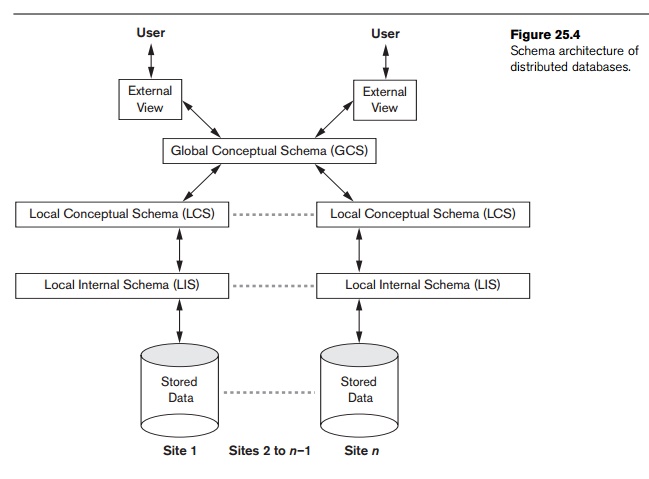 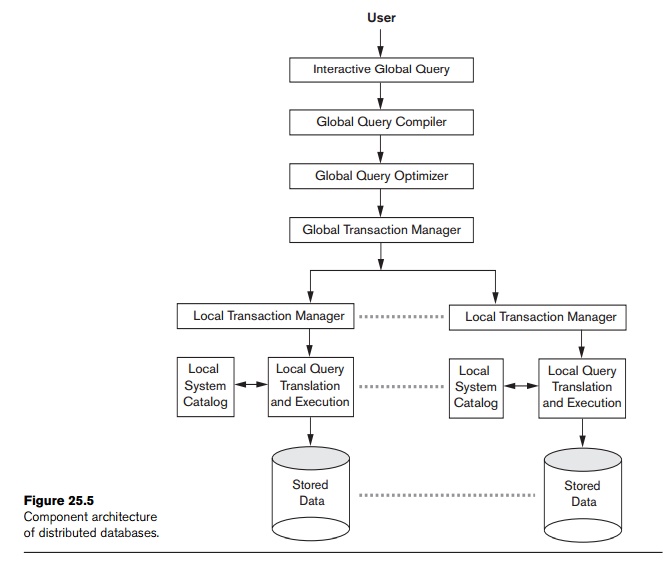 I/O, and network latencies) and estimated sizes of intermediate results. The latter is particularly important in queries involving joins. Having computed the cost for each candidate, the optimizer selects the candidate with the minimum cost for execution. Each local DBMS would have their local query optimizer, transaction man-ager, and execution engines as well as the local system catalog, which houses the local schemas. The global transaction manager is responsible for coordinating the execution across multiple sites in conjunction with the local transaction manager at those sites. 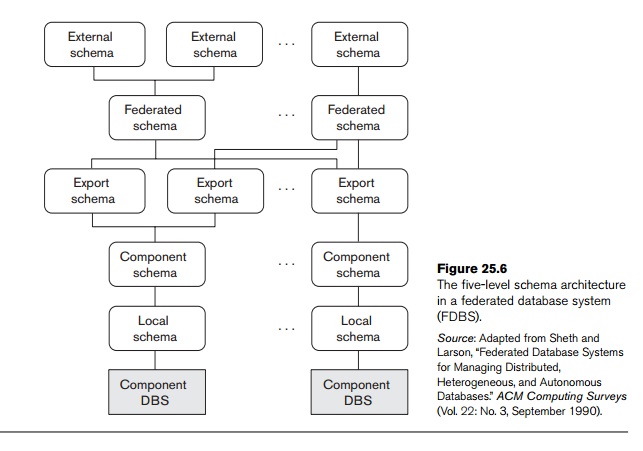 All the problems related to query processing, transaction processing, and directory and metadata management and recovery apply to FDBSs with additional considerations. It is not within our scope to discuss them in detail here.

4. An Overview of Three-Tier Client-Server Architecture

In the three-tier client-server architecture, the following three layers exist:

1. Presentation layer (client). This provides the user interface and interacts with the user. The programs at this layer present Web interfaces or forms to the client in order to interface with the application. Web browsers are often utilized, and the languages and specifications used include HTML, XHTML, CSS, Flash, MathML, Scalable Vector Graphics (SVG), Java, JavaScript, Adobe Flex, and others. This layer handles user input, output, and naviga-tion by accepting user commands and displaying the needed information, usually in the form of static or dynamic Web pages. The latter are employed when the interaction involves database access. When a Web interface is used, this layer typically communicates with the application layer via the HTTP protocol.

2. Application layer (business logic). This layer programs the application logic. For example, queries can be formulated based on user input from the client, or query results can be formatted and sent to the client for presentation. Additional application functionality can be handled at this layer, such 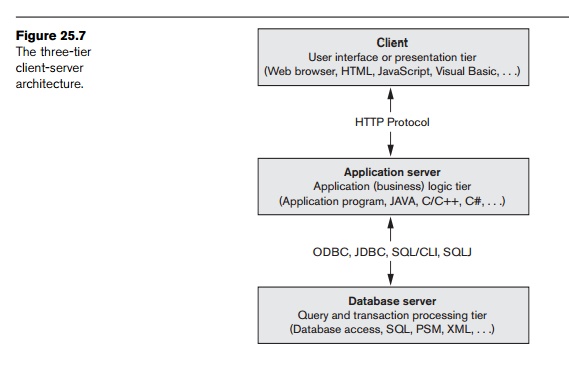 as security checks, identity verification, and other functions. The application layer can interact with one or more databases or data sources as needed by connecting to the database using ODBC, JDBC, SQL/CLI, or other database access techniques.

3.   Database server. This layer handles query and update requests from the application layer, processes the requests, and sends the results. Usually SQL is used to access the database if it is relational or object-relational and stored database procedures may also be invoked. Query results (and queries) may be formatted into XML (see Chapter 12) when transmitted between the application server and the database server.

Exactly how to divide the DBMS functionality between the client, application server, and database server may vary. The common approach is to include the functionality of a centralized DBMS at the database server level. A number of relational DBMS products have taken this approach, where an SQL server is provided. The application server must then formulate the appropriate SQL queries and connect to the database server when needed. The client provides the processing for user inter-face interactions. Since SQL is a relational standard, various SQL servers, possibly provided by different vendors, can accept SQL commands through standards such as ODBC, JDBC, and SQL/CLI (see Chapter 13).

In this architecture, the application server may also refer to a data dictionary that includes information on the distribution of data among the various SQL servers, as well as modules for decomposing a global query into a number of local queries that can be executed at the various sites. Interaction between an application server and database server might proceed as follows during the processing of an SQL query:

1. The application server formulates a user query based on input from the client layer and decomposes it into a number of independent site queries. Each site query is sent to the appropriate database server site.

3. The application server combines the results of the subqueries to produce the result of the originally required query, formats it into HTML or some other form accepted by the client, and sends it to the client site for display.