It is the simplest mode of cell division and occurs in unicellular animals, aging cells and in foetal membranes. During amitosis, nucleus elongates rst, and a constriction appears in it which deepens and divides the nucleus into two, followed by this cytoplasm divides resulting in the formation of two daughter cells.

It was rst discovered by Fleming in 1879. In this cell division one parent cell divides into two identical daughter cells, each with a nucleus having the same amount of DNA, same number of chromosomes and genes as the parent cells. It is also called as equational division.

Mitosis consists of two events, they are

Interphase is the resting phase of the nucleus. It is the interval between two successive cell divisions. During this phase the cell prepares itself for the next division by synthesizing the substances essential for next cell division.

The division of the nucleus into two daughter nuclei is called Karyokinesis. It consists of four phases. They are:

During this stage chromosomes become short and thick and are clearly visible inside the nucleus. Centrosome splits into two daughter centrioles, they move apart and occupy opposite poles of the cell. Each centriole is surrounded by radiating rays, termed as aster rays. Spindle bres appear between the two centrioles. Nuclear membrane and nucleolus disappear gradually.

b. Metaphase (meta – after)

The duplicated chromosomes arrange on the equatorial plane and form the metaphase plate. Each chromosome gets attached to a spindle fibre by its centromere which is known as the chromosomal fibre. The centromere of each chromosome divides into two, each being associated with a chromatid.

The centromeres attaching the two chromatids divide and the two daughter chromatids of each chromosome separate and migrate towards the two opposite poles. The migration of the daughter chromosomes is achieved by the contraction of spindle fibres.

Each chromatid (or) daughter chromosome lengthens, becomes thinner and turns into a network of chromatin threads. Spindle bres breakdown and disappear. Nuclear membrane and nucleolus reappear in each daughter nucleus. 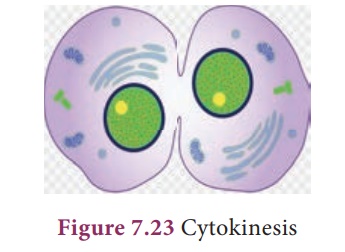 1. This equational division results in the production of diploid daughter cells with equal distribution of genetic material (DNA). It maintains the diploid (2n) number of chromosomes in daughter cells.

2. In multicellular organisms growth, organ development and increase in body size are accomplished through the process of mitosis

3. Mitosis helps in repair of damaged and wounded tissues by renewal of the lost cells.

4. It is involved in replacement of old and dead cells.

The term meiosis was coined by Farmer in 1905. It is the kind of cell division that produces the sex cells or the gametes. It is also called reduction division because the chromosome number is reduced to haploid from diploid (2n). Meiosis produces four daughter cells from a parent cell.

Meiosis consists of two divisions. They are,

It divides the diploid cell into two haploid cells. The daughter cells resulting from this division are different from the parent cell in the chromosome number (Heterotypic). This consists of 5 stages.

Prophase I takes a longer duration and is sub divided into five stages.

The chromosomes become uncoiled and assume long thread like structures and take up a specific orientation inside the nucleus. They form a bouquet stage.

The chromosomes are visible as long paired twisted threads. The pairs so formed are called bivalents. Each bivalent now contains four chromatids (tetrad stage). Homologous chromosomes of each pair begin to separate, they do not completely separate, but remain attached together at one or more points by X- shaped arrangements known as chiasmata. The chromatids break at these points, broken segments maybe interchanged (crossing over). As a result, the genetic recombination takes place.

Each individual chromosome of each bivalent begins to split longitudinally into two similar chromatids. The homologous chromosomes repel each other and separate. Chiasmata begin to move along the length of the chromosome from the centromere towards the end resulting in terminalization.

The paired chromosomes are shortened and thickened. The nuclear membrane and nucleolus begin to disappear. Spindle fibres make their appearance.

The chromosomes move towards the equator and finally they orient themselves on the equator. The two chromatids of each chromosome do not separate as in Mitosis. The centromere does not divide.

Each homologous chromosome with its two chromatids and undivided centromere move towards the opposite poles of the cell. This stage of the chromosome is called Diad.

The haploid number of chromosomes after reaching their respective poles become uncoiled and elongated. The nuclear membrane and the nucleolus reappear and thus two daughter nuclei are formed.

The cytoplasmic division occurs and two haploid cells are formed.

In this division, the two haploid cells formed during first meiotic division divide into four haploid cells. The daughter cells are similar to parent cell in the chromosome number (Homotypic). It consists of five stages. 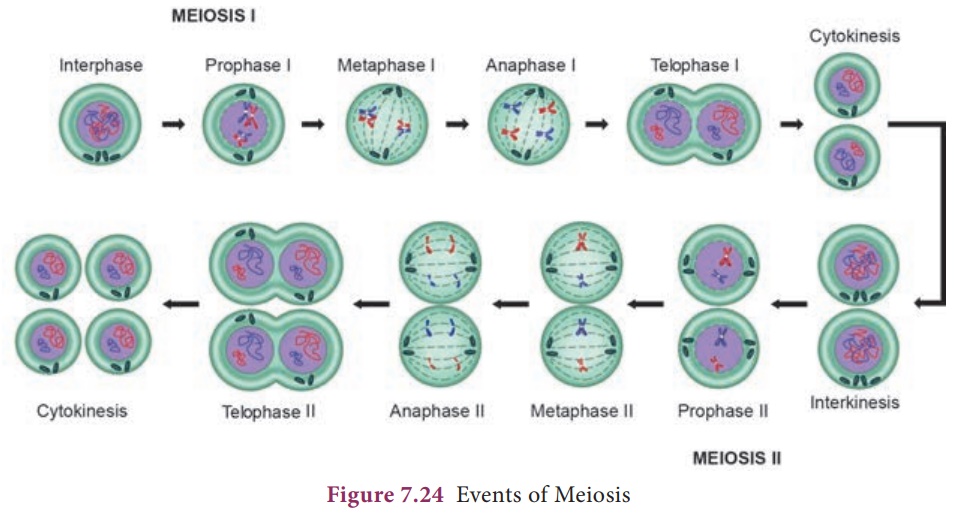 The centriole divides into two, each one moves to opposite poles. Asters and spindle fibres appear. Nuclear membrane and nucleolus disappear.

The chromosomes get arranged on the

The separated chromatids become daughter chromosomes and move to opposite poles due to the contraction of the spindle fibres.

The daughter chromosomes are centered. The nuclear membrane and the nucleolus appear.

It occurs after nuclear division and two cells are formed from each haploid daughter cell, resulting in the formation of four cells with haploid number of chromosomes.

i. The constant number of chromosomes in a given species is maintained by meiotic division.

ii. Crossing over causes genetic variations among the species from one generation to the next.

Differences between Mitosis and Meiosis 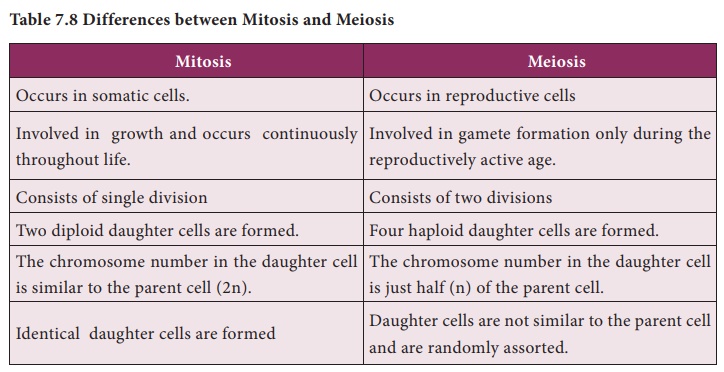 ·           Involved in growth and occurs continuously throughout life.

·           Involved in gamete formation only during the reproductively active age.

·           Daughter cells are not similar to the parent cell and are randomly assorted.