Types of Biomolecules and recent examples

Types of Biomolecules and recent examples

In recent years, several important products such as human biopharmaceuticals, recombinant antibodies, recombinant subunit vaccines, nutritional supplements, biodegradable plastics have been produced in plants with high success (Miao et al., 2008). The first pharmaceutically relevant protein made in plants was human growth hormone, which was expressed in transgenic tobacco in 1986 (Barta etal., 1986). The first antibody was also expressed in tobacco in 1989,which proved that plants could assemble complex functional glycoproteins with several subunits (Hiatt et al., 1989). Since then, other important vaccine candidates and therapeutic proteins have been produced in transgenic plants and are in different stages of clinical trials (Ma et al., 2003). Some important recombinant products produced in plant systems is given in table 2. 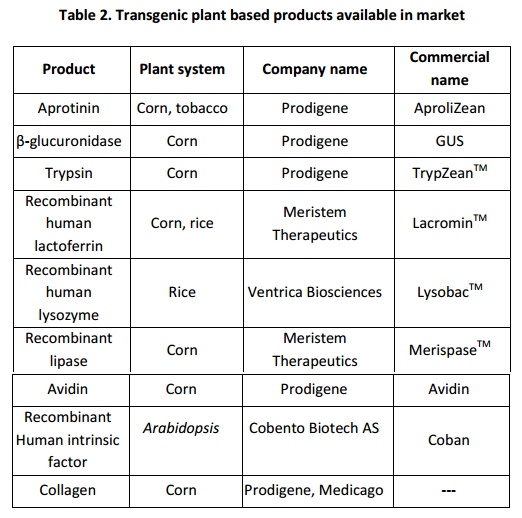 Plants can be engineered to act as bioreactors for vaccines and therapeutic production, and their metabolic pathways can be manipulated to increase compounds of benefit or decrease detrimental compounds. Plant molecular farming applications can be broadly classified as plant made pharmaceuticals (PMPs), Plant made nutritional compounds (PMNs) Plant made vaccines (PMVs), Plant made plastics (PMPs) and plant made industrials (PMIs) (Horn et al., 2004).

Therapeutic proteins are bioactive molecules that have potential applications in medicinal diagnostics and therapy. Several therapeutic products can be produced in plants which include diagnostic proteins (antibodies and enzymes), replacement proteins (Factor VIII for hemo philiacs, in sulin for diabetics), immune system stimulator/suppressants (interleukins, interferons, and colony stimulating factors), and adhesive proteins for surgical purposes or for growth factors (Daniell et al., 2001b; Goldstein and Thomas, 2004; Rajasekharan, 2006; Twyman et al., 2005). Antibodies or immunoglobulins (IgGs) are serum proteins that play a central role in the humoral immune response and the production of these antibodies in plants are referred as “Plantibodies” (De Jaeger et al., 2000; Goldstein and Thomas, 2004). The production of immunoglobulin fragments and their assembly in plants was reported in tobacco for the first time (Hiatt et al., 1989). 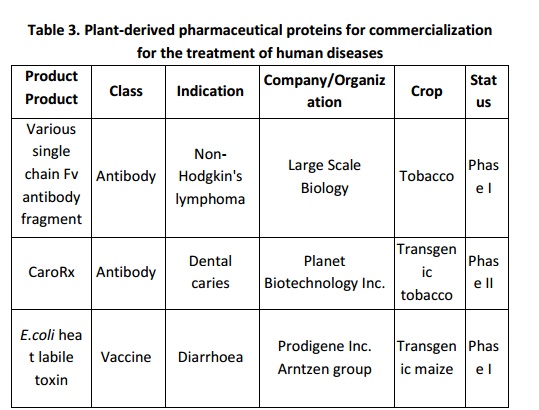 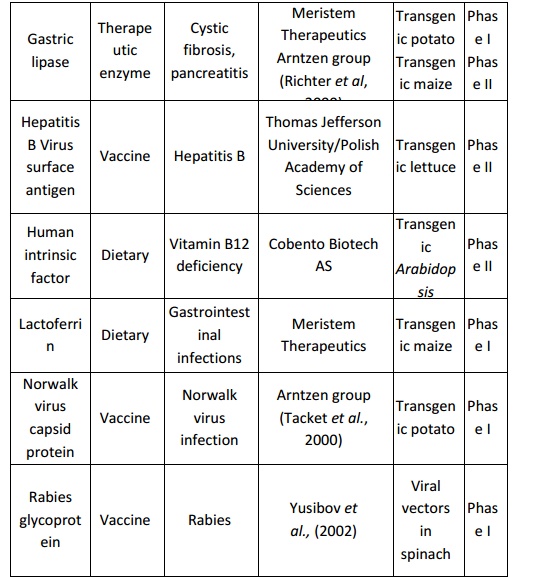 Human glucocerebrosidase (hGC) is required for enzyme replacement therapy was produced in tobacco and in transgenic carrot cells by Protalix Biotherapeutics. Human somatotropin (hST) which is used to treat hypopituitary dwarfism in children, turner syndrome andchronic renal failure, was produced in tobacco chloroplasts and proteins accumulated up to 7% of TSP (Staub et al., 2000). An artificial substitute for human breast milk with the bioactive proteins, a synthetic human lactoferrin (HLF) was produced in rice and the transgenic rice plants showed HLF accumulation 0.5% in dehusked rice grain (Nandi et al., 2002). Plants have the potential to produce large amounts of mAbs, with low production costs, the ability to be rapidly scaled up to meet market demand and reduced risk of contamination with human and animal pathogens (Fischer et al., 2003; Teli and Timko, 2004). Other crop plants like potatoes, alfalfa and rice have also been used to produce antibodies (Goldstein and Thomas, 2004).

Plants can provide most of the nutrients required in the human diet. However, major crops have been found to be deficient in one or the other nutrients. The advances in genetic modifications have made it possible to enhance the nutritional quality of the plants (Galili et al., 2002; Zimmermann and Hurrell, 2002). Several technical advances have been made from earlier attempts to simultaneously manipulating multiple steps in plant metabolic pathways and in constructing novel, multi-enzyme pathways in plant tissues (Kinney, 2006; Sandmann et al., 2006; Wu et al., 2005). In the last few years, a lot of progress has been made in the field of biofortification, specifically palnts with higher β-carotene, lycopene, vitamins, flavonoids, resveratrol, polyamines, nutraceuticals, amino acids, nutritional proteins, minerals, fatty acids, and carbohydrates are being produced.

A vaccine is an antigenic preparation used to establish immunity against a disease and the main aim of the vaccination is to eradicate infectious diseases. In the beginning (Prakash, 1996; Artnzen, 1997)proposed that plants can be engineered for the production of vaccines. Several antigenic determinants belonging to various pathogens causing variety of diseases including bacterial and viral diarrhea, anthrax, rabies, cancer, SARS, measles, HIV, diphtheria, pertusis, tetanus, tuberculosis, respiratory syndrome, Alzheimer's disease, malaria, foot and mouth disease of cattle, gastroenteritis, hemorrhagic disease, bursal disease, goat plague, rinder pest virus, cytomegalovirus infections, parvoviral infections of dogs, avian influenza and bovine pneumonia have been produced in plants (Khandelwal et al., 2003; Sharma et al., 2004; Streatfield and Howard, 2003; Tiwari et al., 2009; Youm et al., 2008). In recent years, a large number of antigens have been produced in plants and shown to activate the immune response against the antigen in the animal models. Dow Agro Sciences has received the first ever regulatory approval for plant-made vaccine from the USDA Center for Veterinary Biologics (CVB) in January 2006.

In addition to the production of vaccines for diseases of humans in plant systems, attempts were also made to develop transgenic plants for the production of veterinary vaccines too. Attempts have been made for the production of vaccines for foot and mouth disease (FMDV), bovine rotavirus disease virus (BRV) and bovine viral diarrhoes virus (BVDV) in plants (Santos and Wigdorovitz, 2005). Even though plant based expression system is a very attractive alternative to the conventional methodologies, low expression level of the antigen in plants is the main drawback.

Plastics difficult to dispose off and continually accumulating non-degradable wastes have become a significant source of environmental pollution (Shimao, 2001). Biodegradable plastics seem to be a viable alternative to synthetic plastics. The biodegradable materials canundergo decomposition into carbon dioxide, methane, water, inorganic compounds with the help of the enzymatic actions of microorganisms within a specified period of time (Anderson and Dawes, 1990). Polyhydroxyalkanoates (PHAs) are the biodegradable polymers which occur naturally in plants. Plants have been engineered to produce PHAs or PHBs in the various plant cell compartments (John and Keller, 1996; Matsumoto et al., 2009). For the economic feasibility of transgenic plants-derived biodegradable plastics, accumulation of at least 15% of the tissue dry weight is required (Scheller and Conrad, 2005). The expression level of biodegradable plastic-like compounds in plants, have also been targeted to chloroplast (Bohmert et al.,2000; Lossl et al.,2005; Lossl et al.,2003; Nawrath et al.,1994) and expression levels ranging up to 40% of dry weight have been obtained (Bohmert et al., 2000). It was also produced in peroxisomes by using RAVAL residues encoding sequence at the carboxy terminal, accumulating PHBs up to 2% dry weight (Hahnn et al., 1999). There is a need for further improvements in PHB production in plants, aimed at higher accumulation without any side effects in plants.

For efficient production of recombinant products, the selection of the host plant plays an important role (Sharma and Sharma, 2009). Apart from this, the life cycle of the host, biomass yield, containment, scale-up costs, the form of recombinant protein, ease of downstream processing are the deciding factors. The site of protein localization in the plant cell is another important criterion which decides the correct protein folding and its yield. Various plant organs (leaves, roots, seeds) and plant cell compartments (endoplasmic reticulum, vacuole, chloroplast, oil bodies) are being tested as sites for recombinant protein accumulation (Goldstein and Thomas, 2004).