Plants are modified to produce a wide range of heterologous proteins including pharmaceutical and industrial proteins, through recombinant DNA technology, often referred as plant molecular farming.

Plants are modified to produce a wide range of heterologous proteins including pharmaceutical and industrial proteins, through recombinant DNA technology, often referred as plant molecular farming (Faye and Gomord, 2010; Ma and Wang, 2012; Obembe et al., 2011; Wilken and Nikolov, 2012). As green bioreactors, plants offers a variety of advantages such as nearly unlimited scalability, from small scale trials in growth chambers to large open-field mass production, and all at relatively inexpensive cost. Plants have become a promising alternative over the traditional expression systems to produce a variety of valuable biological molecules ranging from medicinal applications such as vaccines to materials like biodegradable plastics with industrial uses (Twyman et al., 2005).Plants can produce sufficiently high yields of proteins than bacterial or yeast fermentation systems and at 0.1% of the cost of mammalian cell cultures (Twyman et al., 2003). In addition plants have an advantage over other protein expression systems, such as bacteria, for the production of antibodies and other complex proteins because they are able to make, fold and correctly assemble proteins consisting of multiple subunits. As an example, secretory Immunoglobulin A (sIgA) which consists of four linked proteins are successfully produced in tobacco plants (Goldstein and Thomas, 2004). The comparison of recombinant protein production in plants, yeast and mammalian systems (Ma et al., 2003) is given in table 1. 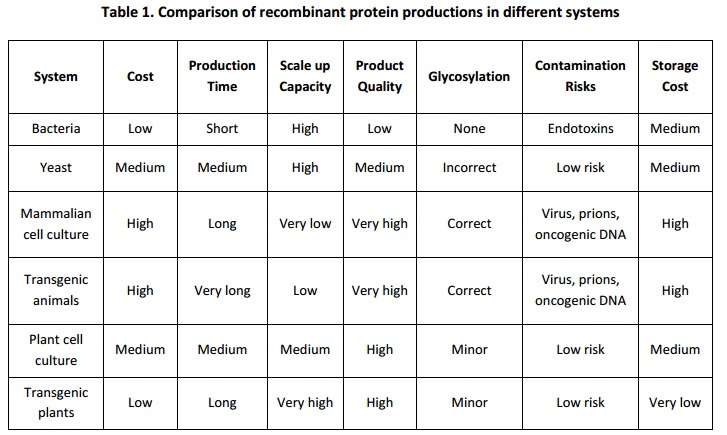