Type III reaction is mediated by antigen–antibody immune complexes, which induce an inflammatory reaction in tissues.

Type III reaction is mediated by antigen–antibody immune complexes, which induce an inflammatory reaction in tissues.

In many situations, reactions between the various antigens and antibodies in the body give rise to formation of immune complexes (Fig. 19-3). In the normal course, these immune complexes are normally removed by mononuclear-phagocyte system through participation of RBC. However, the body may be exposed to an excess of antigen in many conditions, such as persistent infection with a microbial organism, autoimmu-nity to self-components, and repeated contact with environ-mental agents. When the clearance capacity of this system is exceeded, deposition of the complexes takes place in various tissues.

Immune complexes are deposited (a) on blood vessel walls, (b) in the synovial membrane of joints, (c) on the glomerular basement membrane of the kidneys, and (d) on the choroid plexus of the brain. Sometimes, immune complexes are formed at the site of inflammation itself. These in situ immune com-plexes, in certain cases, may be beyond the reach of phagocytic clearance and hence aggregate and cause disease. 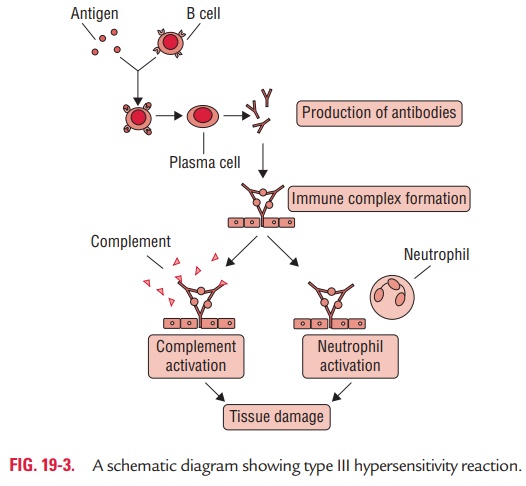 The proteolytic enzymes (including neutral proteinases and collagenase), kinin-forming enzymes, polycationic proteins, and reactive oxygen and nitrogen intermediates cause damage in the local tissues and enhance the inflammatory responses. Platelets aggregated by intravascular complexes provide yet another source of vasoactive amines and may also form micro-thrombi, which can lead to local ischemia.

The lag time between antigen challenge and the reaction is usually 6 hours. This is considerably longer than the lag time of an immediate hypersensitivity reaction, but shorter than that of a delayed hypersensitivity reaction. Tissue damage is caused by deposition of antigen–antibody immune complexes and complement. The activation of complement through its product of activation causes vascular occlusion and necrosis.

Serum sickness is a systemic inflammatory reaction caused by deposition of immune complexes at many sites of the body. The condition manifests after a single injection of a high concentration of foreign serum. It appears a few days to 2 weeks after injection of foreign serum or certain drugs, such as peni-cillin. However, serum sickness is considered as an immediate hypersensitivity reaction, because symptoms appear immedi-ately after formation of immune complex.

Unlike type I hypersensitivity reaction, a single injection acts as both priming and shocking doses. Fever, lymphadenopathy, rashes, arthritis, splenomegaly, and eosinophilia are the typi-cal manifestations. Disease is self-limited and clears without sequelae.

Formation of circulating immune complexes contributes to the pathogenesis of a number of conditions other than serum sickness. These include the following: