Type I reactions are also known as IgE-mediated hypersensi-tivity reactions. IgE is responsible for sensitizing mast cells and providing recognition of antigen for immediate hypersensitiv-ity reactions. The short time lag between exposure to antigen and onset of clinical symptoms is due to the presence of pre-formed mediators in the mast cells. Thus, the time taken for these reactions to initiate is minimal, so the onset of symptoms seems to be immediate. Type I reaction can occur in two forms: anaphylaxis and atopy.

Anaphylaxis is an acute, potentially fatal, and systemic mani-festation of immediate hypersensitivity reaction. It occurs when an antigen (allergen) binds to IgE on the surface of mast cells with the consequent release of several mediators of anaphylaxis. On exposure to the antigen, TH2 cells specific to the antigen are activated, leading to the stimulation of B cells to produce IgE antibody (Fig. 19-1). The IgE then binds to Fc portion of mast cells and basophils with high affinity. On re-exposure to the antigen, the allergen cross-links the bound IgE, followed by activation of IgE and degranulation of basophils and mast cells to release pharmacologically active mediators within minutes. 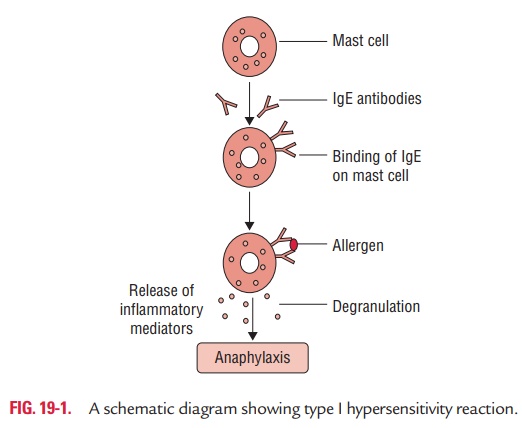 Binding of IgE to the mast cells is also known as sensitiza-tion, because IgE-coated mast cells are ready to be activated on repeat antigen encounter.

The initiator of type I reaction is otherwise known as allergen. Typical allergens include:

The exact reason for these substances to act as allergens is not known, although they show some common characteristics. Because these reactions are T-cell dependent, T-cell-independent antigens like polysaccharides cannot elicit type I reactions.

The effector cells in anaphylaxis include (a) mast cells, (b) baso-phils, and (c) eosinophils. All these three cells contain cyto-plasmic granules whose contents are the major mediators of allergic reactions. Also, all these three cell types produce lipid mediators and cytokines that induce inflammation.

Mast cells: Mast cells are the prime mediators of anaphylaxis.These cells are found throughout connective tissue, particularly near blood and lymphatic vessels. IgE-mediated degranulation of mast cells occurs when an allergen causes cross-linkage of the mem-brane-bound IgE. The importance of cross-linkage in the process can be understood by the fact that monovalent molecules, which cannot cause cross-linkage, are unable to cause degranulation.

Many substances instead of a single substance are respon-sible for all manifestations of anaphylaxis. Important media-tors include (a) histamine, (b) slow-reacting substances of anaphylaxis (SRS-A), (c) serotonin, (d) eosinophilic chemo-tactic factors of anaphylaxis, and (e) prostaglandins and thromboxanes.

Histamine: It is the most important mediator of anaphylaxis.It is found in a preformed state in granules of mast cells and basophils. It causes vasodilatation, increased capillary perme-ability, and smooth muscle contraction.

Slow-reacting substances of anaphylaxis: These are pro-duced by leukocytes. These consist of several leukotrienes, which do not occur in preformed state but are produced during reactions of anaphylaxis.

Leukotrienes are principal mediators of bronchoconstric-tion in asthma and are not inhibited by antihistamines. They cause increased vascular permeability and smooth muscle contraction.

Eosinophilic chemotactic factors of anaphylaxis: It is foundin preformed state in granules of mast cells. It attracts eosino-phils to the site of action. The role of eosinophils, however, is not clear in type I hypersensitivity reaction. Nevertheless, it is believed to reduce severity of type I hypersensitivity by releasing the enzymes histaminase and arylsulfatase that degrade hista-mine and SRS-A, respectively.

Prostaglandins and thromboxanes: Prostaglandins causebronchoconstriction as well as dilatation and increased permea-bility of capillaries. Thromboxanes cause aggregation of platelets.

All these mediators are inactivated by enzymatic reactions very rapidly, hence are active only for a few minutes after their release.

The spectrum of changes seen in type I hypersensitivity can be considered under immediate and late phases.

Immediate phase: This phase is characterized by degranula-tion and release of pharmacologically active mediators within minutes of re-exposure to the same antigen.

Histamine is the principal biogenic amine that causes rapid vascular and smooth muscle reactions, such as vas-cular leakage, vasodilatation, and bronchoconstriction. It is responsible for the “wheal and flare” response seen in cutaneous anaphylaxis and also for the increased peristalsis and bronchospasm associated with ingested allergens and asthma, respectively.

Late phase: This phase begins to develop 4–6 hours afterthe immediate phase reaction and persists for 1–2 days. It is characterized by the infiltration of neutrophils, macrophages,eosinophils, and lymphocytes to the site of reaction. This leads to an amplification of the various inflammatory symptoms seen as a part of the early reaction like bronchoconstriction and vasodilatation. The cells remain viable after degranulation and proceed to synthesize other substances that are released at a later time, causing the late phase of type I reactions. The media-tors are not detectable until after some hours of the immedi-ate reaction. The important mediators involved during the late phase are:

Anaphylaxis is an acute, life-threatening reaction usually affect-ing multiple organs. The time of onset of symptoms depends on the level of hypersensitivity and the amount, diffusibility, and site of exposure to the antigen.

Multiple organ systems are usually affected, including the skin (pruritus, flushing, urticaria, and angioedema), respira-tory tract (bronchospasm and laryngeal edema), and cardio-vascular system (hypotension and cardiac arrhythmias). When death occurs, it is usually due to laryngeal edema, intractable bronchospasm, hypotensive shock, or cardiac arrhythmias developing within the first 2 hours (Table 19.2).

Anaphylactoid reaction: This appears to be clinically simi-lar to anaphylactic reaction but differs from it in many ways. First, it is not IgE mediated. Second, the inciting agents (such as drugs or iodinated contrast media) stimulate directly baso-phils and mast cells to release mediators without any involve-ment of the IgE.

◗ Management and prevention of anaphylaxis

Acute desensitization involves the administration of smallamounts of antigen to which the person is sensitive, at an inter-val of 15 minutes. The complex of antigen–IgE is produced in small quantities; hence enough mediators are not released to produce a major reaction. However, this action is short lived because of the return of hypersensitivity reaction due to con-tinued production of IgE.

Chronic desensitization involves the long-term administra-tion of antigen to which the person is sensitive, at an interval of weeks. This stimulates the production of IgA- and IgG-blocking antibodies that prevent subsequent antigen to binding to mast cells, therefore, preventing the reaction.

Administration of drugs to inhibit the action of mediators, maintenance of airways, and support of respiratory and car-diac functions form the mainstay of treatment of anaphylactic reactions.

The term atopy was first coined by Coca (1923) to denote a con-dition of familial hypersensitivities that occur spontaneously in humans. Atopy is recurrent, nonfatal, and local manifesta-tion of immediate hypersensitivity reaction.

The reaction shows a high degree of familial predisposition and is associated with a high level of IgE. It is localized to a specific tissue, often involving epithelial surfaces at the site of antigen entry. It is mediated by IgE antibodies, which are homocytotropic (i.e., species specific). Only human IgE can fix to surface of mast cells.

Common manifestations of atopy are asthma, rhinitis, urti-caria, and atopic dermatitis. The commonest of atopic reac-tions is bronchial asthma.

Atopy is associated with mutations in certain genes encod-ing the alpha chain of the IL-4 receptor. These mutations facilitate the effectiveness of IL-4, resulting in an increased pro-duction of IgE synthesis by B cells.

Atopic individuals produce high levels of IgE in response to allergens as against the normal individuals who do not. This depends on the propensity of an individual to mount a TH2 response, because it is only TH2 cell-derived cytokines that stimulates the heavy-chain isotype switching to the IgE class in B cells. Stimulation of heavy chain isotype switching to the IgE class may be influenced by a variety of factors including inher-ited genes, the nature of the antigens, and the history of antigen exposure.

Atopic hypersensitivity is non-transferable by lymphoid cells, but by serum. This observation was used in the past for diagnosis of passive cutaneous anaphylaxis reaction by Prausnitz–Kustner reaction.

Radioallergosorbent test (RAST), enzyme linked immuno-sorbent assay (ELISA), and passive agglutination tests are the frequently used tests for detection of IgE in the serum for diag-nosis of atopy.