Type II cytotoxic reaction is mediated by antibodies directed against antigens on the cell membrane that activates comple-ment thereby causing antibody-mediated destruction of cells (Fig. 19-2). The cell membrane is damaged by a membrane attack complex during activation of the complement.

The reactions involve combination of IgG or IgM antibodies with the cell-fixed antigens or alternately circulating antigens absorbed onto cells. Antigen–antibody reaction leads to com-plement activation, resulting in the formation of membrane attack complex. This complex then acts on the cells, causing damage to the cells, as seen in complement-mediated lysis in Rh hemolytic disease, transfusion reaction, or hemolytic ane-mia. Similarly, the antibodies combining with tissue antigens contribute to the pathogenesis of Goodpasture’s syndrome, pemphigus, and myasthenia gravis. 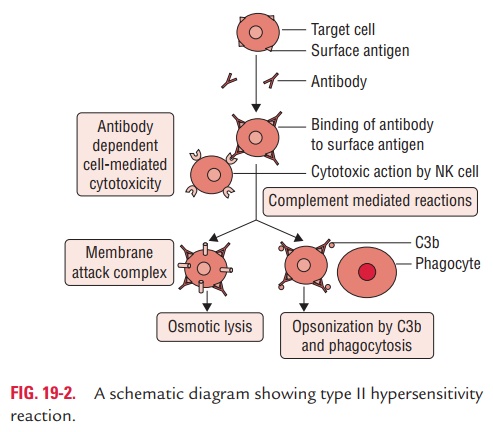 Antibody-dependent cell-mediated cytotoxicity (ADCC): Itis another mechanism, which involves the binding of cytotoxic cells with Fc receptors in the Fc binding part of the antibodies coating the target cells. The antibody coating the target cell can also cause its destruction by acting as an opsonin. This mecha-nism is important in immunity against large-sized pathogens, such as the helminths.

A large number of proteins and glycoproteins are present on the surface of RBCs, of which A, B, and O antigens are of par-ticular importance. Antibodies to these antigens are called iso-hemagglutinins and are of IgM class. When transfusion with mismatched blood occurs, a transfusion reaction takes place due to the destruction of the donor RBCs through the isohem-agglutinins against the foreign antigen.

The clinical manifestations result from the massive intravas-cular hemolysis of the donor cells by antibody and complement.

This condition develops when maternal antibodies specific for fetal blood group antigens cross the placenta and destroy fetal RBCs. This condition is seen in cases where a presensi-tized Rh-negative mother mounts an immune response against Rh-positive RBCs of the fetus. This results in severe hemolysis, leading to anemia and hyperbilirubinemia, which can even be fatal.

Autoantibodies of IgG class are produced against basement membrane of the lungs and kidneys in Goodpasture’s syndrome. Such autoantibodies bind to tissues of the lungs and kidneys and activate the complement that leads to an increased produc-tion of C5a, a component of the complement. The C5a causes attraction of leukocytes, which produce enzyme proteases that act on lung and kidney tissues, causing damage of those tissues.

In this condition, antibodies are produced against group A streptococci that cross-react with cardiac tissues and activate complement and release of components of complement, which in turn causes damage of cardiac tissues.