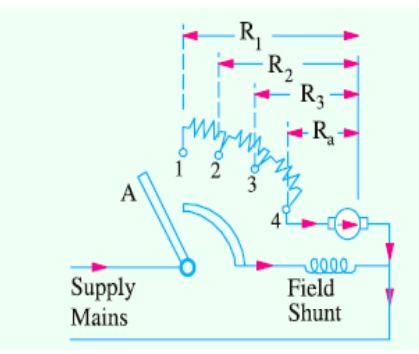 Such a starter used to limit the star4ting current in case of dc series motor is called two point starters.

The basic construction of two point starter is similar to that of three point starter the fact that is has only two terminal namely line (L) and field F.

The terminal is one end of the series combination of field and the armature winding.

The action of the starter is similar to that of three point starter.

The handle of the starter is in OFF position.

When it is moved to on, motor gets the supply and the entire starting resistance is in series with the armature and field. It limits the starting current.

The current through no volt coil energizes it and when handle reaches to RUN position, the no volt coil holds the handle by attracting the soft iron piece on the handle.

Hence the no volt coil is also called hold on coil.

The main problem in case of dc series motor is it over speeding action when the load is less. This can be prevented using two point starters.

The no volt coil is designed in such a way that it holds the handle in RUN positions only when it carries sufficient current, for which motor can run safely.

If there is loss of load then current drawn by the motor decreases, due to which no volt coil losses its required magnetism and releases the handle.

Under spring force, handle comes back to OFF position, protecting the motor from over speeding.

Similarly if there is any supply problem such that voltage decreases suddenly conditions. 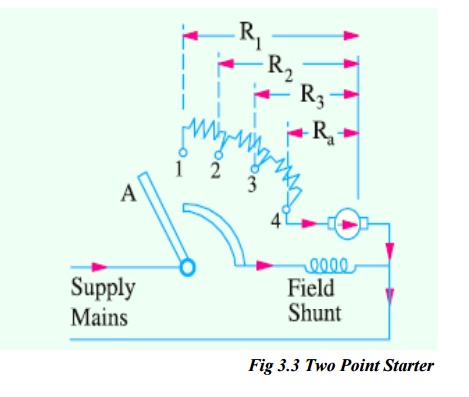 The overload condition can be prevented using overload magnet increases.

This energizes the magnet up to such an extent that it attracts the lever below it.

When lever is lifted upwards, the triangular piece attached to it touches the two pints, which are the two ends of no volt coil.

Thus no volt coil gets shorted, loosing its magnetism and releasing the handle back to OFF position.

This protects the motor from overloading conditions.