What is the need for starter in an induction motor?

At starting when full voltage is connected across the stator terminals of an induction motor, large current is drawn by the windings. This is because, at starting (i.e before the rotor starts rotating) the induction motor behaves as s short circuited transformer.

At starting, when the rotor is at stand still emf is induced n the rotor circuit exactly similar to the emf induced in the secondary windings of a transformer. This induced emf of the rotor will circulate a very large current through its windings, due to short. The primary will draw very large current nearly 5 – 7 times of the rated current from the supply mains to balance rotor ampere turns. This current will however be gradually decreasing as motor will pick up speed.

In order to reduced starting current starters are used. Induction motor starter will supply reduced voltage to the stator of induction motors.

In D.O.L starter starting torque to full load torque ratio is given by

What is the starting torque to full load torque ratio in case of primary resistance (or) reactance starter?

What is the starting torque to full load torque ratio in case of Auto –transformer starter?

What is starting torque to full load torque ratio in case of star-delta starter?

Mention the Starters used to start a DC motor?

Mention the Starters used to start an Induction motor?

What are the protective devices in a DC/AC motor Starter?

Over load Release (O.L.R) or No volt coil

Is it possible to include/ Exclude external resistance in the rotor of a Squirrel cage induction motor? Justify

No it is not possible to include/ Exclude external resistance in the rotor of a Squirrel cage induction motor because, the rotors bars are permanently short circuited by means of circuiting rings (end rings) at both the ends. i.e. no slip rings to do so.

Give the prime purpose of a starter for motors?

When induction motor is switched on to the supply, it takes about 5 to 8 times full load current at starting. This starting current may be of such a magnitude as to cause objectionable voltage drop in the lines. So Starters are necessary

When 3 phase supply is given to the stator of an induction motor, magnetic field rotating in space at synchronous speed is produced. This magnetic field is cut by the rotor conductors, which are short, circuited. This gives to induced current in them. Since rotor of an induction motor behaves as a short circuited secondary of a transformer whose primary is stator winding, heavy rotor current will require corresponding heavy stator balancing currents. Thus motor draws heavy current at starting

What are the methods to reduce the magnitude of rotor current (rotor induced current) at starting?

By increasing the resistance in the rotor circuit

What is the objective of rotor resistance starter (stator rotor starter)?

To include resistance in the rotor circuit there by reducing the induced rotor current at starting. This can be implemented only on a slip ring induction motor.

How reduced voltage starting of Induction motor is achieved?

Give the relation between line voltage and phase voltage in a

Give some advantages and disadvantages of D.O.L starter? Advantages:

The inrush current of large motors may cause excessive voltage drop in the weak power system The torque may be limited to protect certain types of loads. 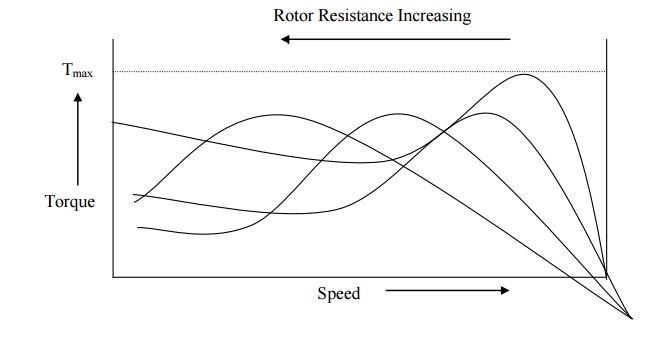 Mention any two methods of making a single phase induction motor self starting?

To make single phase induction motor self starting it is temporarily converted into 2 phase machine during starting period. 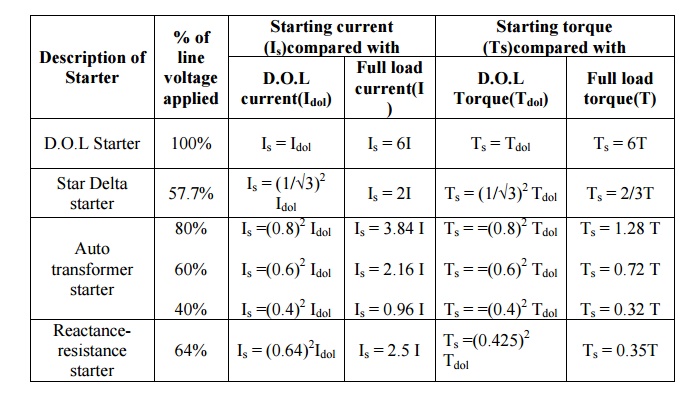