Therapeutic Direction : It is possible to help patients with DID gain control over the dis-sociative process underlying their symptoms in several ways.

It is possible to help patients with DID gain control over the dis-sociative process underlying their symptoms in several ways. The fundamental psychotherapeutic stance should involve meet-ing patients halfway, a form of structured empathy in which their experience of themselves as fragmented is acknowledged while the reality that the fundamental problem is a failure of integration of disparate memories and aspects of the self is kept in view. In this sense, such individuals suffer from having less than one per-sonality rather than more than one. Therefore, the goal in therapy is to facilitate integration of disparate elements. This can be done in a variety of ways.

Secrets are frequently a problem with such patients, who attempt to use the psychiatrist to reinforce a dissociative strat-egy of withholding relevant information from certain personal-ity states. Such patients often like to confide in the psychiatrist with the idea that the information is to be kept from other parts of the self, for example, traumatic memories or plans for self-destructive activities.

Clear limit setting and commitment on the part of the psy-chiatrist to helping all portions of the patient’s personality struc-ture learn about warded-off information are important. It is wise to clarify explicitly that the psychiatrist will not become involved in secret collusion. Furthermore, when important agreements are negotiated, such as commitments on the part of patients to seek medical help before acting on a thought to harm themselves or others, it is useful to discuss with the patients that this is an “all-points bulletin”, requiring attention from all the relevant person-ality states. The excuse that certain personality states were “not aware” of the agreement should not be accepted.

Hypnosis can be helpful in facilitating psychotherapy as well as establishing the diagnosis. First of all, the simple structure of hypnotic induction may elicit dissociative phenomena. Hypnosis can be helpful in facilitating access to dissociated personalities. They may simply occur spontaneously during hypnotic induc-tion. An alternative strategy is to hypnotize the patient and use age regression to reorient to a time when a different personality state was manifest. An instruction later to change times back to the present usually elicits a return to the other personality state. This then becomes a means of teaching such an individual how to control the dissociative process.

Alternatively, entering the state of hypnosis may make it possible simply to address and elicit different identities or per-sonality states. Patients can be taught a simple self-hypnosis ex-ercise for this purpose. For example, the patient can be told to count to herself or himself from one to three. After some formal exercises such as this, it is often possible to ask the patient to speak with a given alter personality, without the formal use of hypnosis. Merely asking to talk with a given identity usually suf-fices after a while.

Because the loss of memory in DID is complex and chronic,its retrieval is likewise a more extended and integral part of the psychotherapeutic process. The therapy becomes an integrating experience of information sharing among disparate personality elements. Conceptualizing DID as a chronic PTSD, the psycho-therapeutic strategy involves a focus on working through trau-matic memories in addition to controlling the dissociation.

Controlled access to memories greatly facilitates psycho-therapy. As with dissociative amnesia, a variety of strategies can be employed to help patients with DID break down amnesic bar-riers. Eliciting various identities or personality states can facili-tate access to memories previously unavailable to consciousness. While so-called “pseudomemories” can occur, previously disso-ciated traumatic memories are often accurate.

Once these memories of earlier traumatic experience have been brought into consciousness, it is crucial to help the patient work through the painful affect, inappropriate self-blame and other reactions to these memories. It may be useful to have pa-tients visualize the memories rather than relive them as a means of making their intensity more manageable. It can also be useful to have patients divide the memories, for example, picturing on one side of an imaginary screen something an abuser did to them and on the other side how they tried to protect themselves from the abuse.

Such techniques can help make the traumatic memories more bearable by placing them in a broader perspective, one in which trauma victims can also identify adaptive aspects of their response to the trauma.

This and similar approaches can help these individuals work through traumatic memories, enabling them to bear them in consciousness and therefore reducing the need for dissocia-tion as a means of keeping such memories and associated painful affect out of consciousness. Although these techniques can be helpful and often result in reduced fragmentation and integra-tion, a number of complications can occur in the psychotherapy of these patients.

The therapeutic process can be thought of as a kind of grief work in which information retrieved from memory is reviewed, traumatic memories are put into perspective, and emotional ex-pression is encouraged and worked through, thereby making it more possible to endure and disseminate the information as widely as possible among various parts of the patient’s personal-ity structure. Instructions to other alter personalities to “listen” while a given one is talking and reviewing previously dissociated material can be helpful.

The Rule of Thirds

The psychotherapy of DID can be a time-consuming and emo-tionally taxing process. The rule of thirds (Kluft, 1991; Schacter, 1995) is a helpful guideline. Spend the first third of the psycho-therapy session assessing the patient’s current mental state and life problems and defining a problem area that might benefit from retrieval into conscious memory and working through. Spend the second third of the session accessing and working through this memory. Allow a final third for helping the patient assimilate the information, regulate and modulate emotional responses, and discuss any responses to the psychiatrist and plans for the im-mediate future. The psychiatrist may resist doing this becausethe intense abreactive materials are often so compelling and in-teresting. The patient may also resist sharing information across personalities. Nonetheless, the psychiatrist can be helpful in im-posing structure on often chaotic memories and identity states.

Given the intensity of the material that often emerges involving memories of sexual and physical abuse and sudden shifts in mental state accompanied by amnesia, the psychiatrist is called on to take a clear and structured role in managing the psychotherapy. Appropriate limits must be set concerning self-destructive or threatening behavior, agreements must be made regarding physical safety and treatment compliance, and other matters must be presented to the patient in such a way that dis-sociative ignorance is not an acceptable explanation for failure to live up to the agreements.

Transference applies with special meaning to patients who have been physically and sexually abused, especially in childhood. They have experienced individuals who are presumed to be care-takers acting instead in an exploitative and sometimes sadistic fashion. They thus expect similar betrayal from psychiatrists. Although their reality testing is good enough that they can per-ceive genuine caring, they often unconsciously expect psychia-trists to exploit them. They may experience working through of traumatic memories as a reinflicting of the trauma, with the psychiatrist taking sadistic pleasure in their suffering. They may expect excessive passivity on the part of the psychiatrist, iden-tifying the psychiatrist with some uncaring family figure who knew that abuse was occurring but did little or nothing to stop it. It is important in managing the therapy to keep these issues in mind and make them frequent topics of discussion. This can diffuse, if not eliminate, such traumatic transference distortions of the therapeutic relationship.

The ultimate goal of psychotherapy is integration of these multiple ego states. It is often the case that one or more of the personality states may exert considerable resistance to the process of integra-tion, particularly early in the process of therapy. Also patients may experience efforts of integration as an attempt on the part of the therapist to “kill” personalities. These fears must be worked through and the patient needs to understand that the goal is to learn how to control the episodes of dissociation. This gives patients a sense of gradually being able to control their dissociative proc-esses in order to work through the traumatic memories. In order to enhance mastery and control, the process of the psychotherapy must help patients minimize rather than reinforce the content of traumatic memories, which often involves reexperiencing a sense of helplessness in a symbolic reenactment of the trauma.

At the same time, the dissociative defense represents an internalization of the abusive people in the patient’s past, a kind of identification with the aggressor, which makes the patient feel powerful rather than helpless. Setting aside the defense also means acknowledging and bearing the helplessness of having been victimized and working through the irrational self-blame that gave such individuals a fantasy of control over events dur-ing which they were helpless. Yet, difficult as it is, ultimately the goal of psychotherapy is mastery over the dissociative process, controlled access to dissociative states, integration of warded-off painful memories and material, and a more integrated con-tinuum of identity, memory and consciousness. Although there have been no controlled trials of the outcome of psychotherapy. 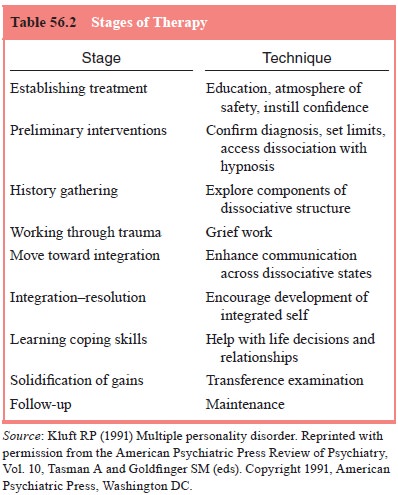 The stages of therapy are presented in Table 56.2.

As with other dissociative disorders, there is little evidence that psychoactive drugs are of great help in reversing dissociative symptoms (Maldonado et al., 2000). In the past, short-acting bar-biturates such as sodium amobarbital were used intravenously to reverse functional amnesia, but this technique is no longer em-ployed, largely because of poor results. Research data provide no evidence suggesting that any medication regimen has any sig-nificant therapeutic effect on the dissociative process manifested by DID patients. To date, pharmacological treatment has been limited to symptom control or the management of comorbid con-ditions (e.g., depression).

Of all available classes of psychotropic agents, antide-pressants are the most useful class for the treatment of patients with DID. That is because patients suffering from dissociation frequently experience comorbid dysthymic or major depressive disorder. The newer agents – selective serotonin reuptake inhibi-tors (SSRIs) – are particularly useful, given their high level of effectiveness, low side-effect profile, and even lower danger in overdose, compared with tricyclic antidepressants and monoam-ine oxidase inhibitors. Nevertheless, medication compliance may be a problem with dissociative patients because dissociated per-sonality states may interfere with medication taking or may take the medication in an overdose attempt.

Benzodiazepines have mostly been used to facilitate re-call by controlling secondary anxiety associated with retrieval of traumatic memories (i.e., medication facilitated interviews). Nev-ertheless, despite their short-term usefulness, CNS-depressant agents may cause sudden mental state transitions, which may inturn increase rather than decrease amnesic barriers. Therefore, as useful as they could be on short-term basis (i.e., acute manage-ment of a panic attack), the long term of these agents may, in fact, contribute rather than treat dissociative episodes.

There are several uses for anticonvulsant agents. We know that seizures disorders have a high rate of comorbidity with DID. Thus, anticonvulsant agents may help control the dissociation associated with epileptogenic activity. On the other hand, anti-convulsant agents have proven to be effective in the management of mood disorders, as well as the impulsiveness associated with personality disorders and brain injury. Also despite their effec-tiveness, these agents produce less amnestic side effects than the benzodiazepines and thus may be preferred. On the other hand, the need for closer monitoring due to potential toxicity, particu-larly in overdoses, makes their use less desirable than the newer SSRIs.

Of all pharmacological agents available, antipsychotics may be the less desirable. First, they are rarely useful in reduc-ing dissociative symptoms. In fact, there have been reports of increased levels of dissociation and an increased incidence of side effects when used in patients suffering from dissociative disorders.