Development of the Concept

Dissociative phenomena are best understood through the term désagrégation (disaggregation) originally given by Janet (1920). Events normally experienced as connected to one another on a smooth continuum are isolated from the other mental processes with which they would ordinarily be associated. The dissocia-tive disorders are a disturbance in the organization of identity, memory, perception, or consciousness. When memories are sep-arated from access to consciousness, the disorder is dissociative amnesia. Fragmentation of identity results in dissociative fugue or dissociative identity disorder (DID; formerly multiple per-sonality disorder). Disintegrated perception is characteristic of depersonalization disorder. Dissociation of aspects of conscious-ness produces acute stress disorder and various dissociative trance and possession states. Numbing and amnesia are diagnos-tic components of post traumatic stress disorder (PTSD). These dissociative and related disorders are more a disturbance in the organization or structure of mental contents than in the contents themselves. Memories in dissociative amnesia are not so much distorted or bizarre as they are segregated from one another. The identities lost in dissociative fugue or fragmented in DID are two-dimensional aspects of an overall personality structure. In this sense, patients with DID suffer not from having more than one personality but rather from having less than one personality. The problem involves information processing: the failure of inte-gration of elements rather than the contents of the fragments.

The dissociative disorders have a long history in classical psychopathology, being the foundation on which Freud began his explorations of the unconscious and Janet developed dissociation theory. Although much attention in psychiatry has shifted to di-agnosis and treatment of mood, anxiety and thought disorders, dissociative phenomena are sufficiently persistent and interesting that they have elicited growing attention from both professionals and the public. There are at least four reasons for this:

They are fascinating phenomena in and of themselves, involv-ing the loss of or change in identity, or memory, or a feeling of detachment from extreme and traumatic physical events.

·        Dissociative disorders seem to arise in response to traumatic stress.

·        Dissociative disorders remain an area of psychopathology for which the best treatment is psychotherapy, although adjunc-tive pharmacological interventions can be helpful.

·        Dissociation as a phenomenon has much to teach us about information processing in the brain.

Development of the Concept

The dissociative disorders might have been studied more inten-sively during the 20th century had not Janet’s and Charcot’s workbeen so thoroughly eclipsed by Freud’s psychoanalytic theory, emphasizing as it did repression rather than dissociation.

Hilgard (1977) developed a neodissociation theory that re-vived interest in Janetian psychology and dissociative psychopa-thology. He postulated divisions in mental structure that were hori-zontal rather than vertical, as was the case in Freud’s archeological model. This model allowed for immediate access to consciousness of any of a variety of warded-off memories, which is not the case in Freud’s system. In the dynamic unconscious model, repressed memories must first go through a process of transformation as they are accessed and lifted from the depths of the unconscious, for ex-ample, through the interpretation of dreams or slips of the tongue. In Hilgard’s model, amnesia is a crucial mediating mechanism that cre-ates barriers dividing one set of mental contents from another. Thus, flexible use of amnesia is conceptualized as a key defensive strategy. Therefore, reversal of amnesia is an important therapeutic tool.

Repression as a general model for keeping information out of conscious awareness differs from dissociation in four impor-tant ways:

·   Repression is less specifically tied to trauma. Dissociation seems to be elicited as a defense most commonly after epi-sodes of physical trauma, whereas repression is in response to warded-off fears, wishes and other dynamic conflicts.

Whether dissociation is a subtype of repression or vice versa, both are important methods for managing complex and affec-tively charged information. Given the complexity of human in-formation processing, the synthesis of perception, cognition and 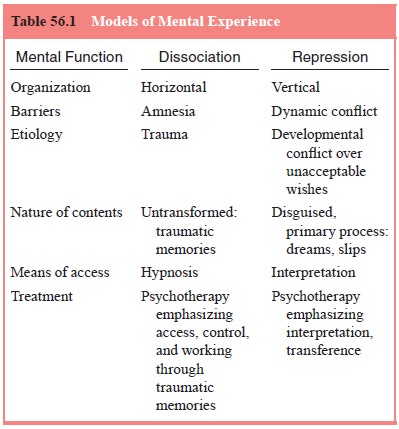 affect is a major task. Mental function is composed of a variety of reasonably autonomous subsystems involving a perception, memory storage and retrieval, intention and action. Indeed, the accomplishment of a sense of mental unity is an achievement, not a given. It is remarkable not that dissociative disorders occur at all, but rather that they do not occur more often. Models of mental experience are presented in Table 56.1.