There are three important components that play an important role in successful transmission of microbial diseases. These are (a) reservoir, (b) mode of transmission, and (c) susceptible host.

There are three important components that play an important role in successful transmission of microbial diseases. These are (a) reservoir, (b) mode of transmission, and (c) susceptible host.

Endogenous sources: The source of infection is the normalbacterial flora present in the human body. These bacteria are usually nonpathogenic but in certain situations become pathogenic and cause infections at different sites in the same host. For example, Escherichia coli present as normal flora of the intestine may cause urinary tract infection in the same host. Similarly, viridans streptococci present as a part of the normal flora of the mouth may cause infective endocarditis.

Exogenous sources: The source of infection is from outsidethe host’s body. Most of the microbial infections are exoge-nous in nature. The exogenous sources include the following:

1.   Humans: Humans are the most common sources ofinfections caused by the microorganisms. They may be either patients or carriers. The patient suffering from an active infec-tion is an important source of infection to others

A carrier is a person who harbors pathogenic microorgan-isms without showing any signs and symptoms of disease. Carriers are also important sources of infections. A carrier may be (a) healthy carrier, (b) convalescent carrier, (c) temporary carrier, and (d) chronic carrier.

·           Healthy carrier is the host who harbors the microorgan-ism without ever suffering from the disease caused by that microorganism.

·           Convalescent carrier is the host who continues to harborthe microorganism even after recovering from the clinical disease caused by the same pathogen.

·           Temporary carrier is the host who harbors the microorgan-ism up to 6 months after recovering from the disease caused by the same pathogen.

·           Chronic carrier is the host who harbors the microorgan-ism for many years after recovering from the clinical disease caused by the same pathogen.

3.Insects: Insects, such as mosquitoes, ticks, mites, flies,fleas, and lice may transmit a wide variety of microorganisms to the humans (Table 10-2). The diseases transmitted by the insects are collectively referred to as arthropod-borne diseases and the insects transmitting these pathogens are called vec-tors. Insect vectors may transmit the infection in two ways: mechanical transmission and biological transmission. 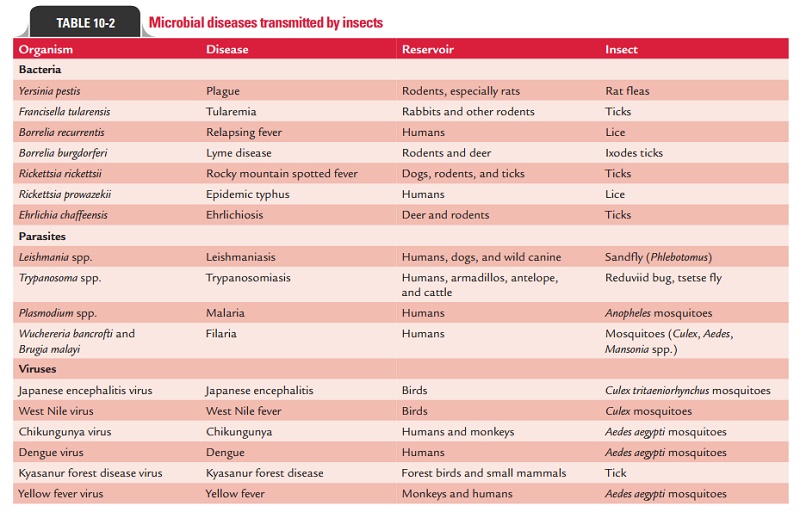 ·           Biological vectors: These are the vectors in which themicroorganisms multiply or undergo a part of their life cycle before being transmitted to humans. Rat flea and female Anopheles mosquitoes are the examples of biological vectors that transmit plague and malaria, respectively, to humans by biting.

Microbial pathogens causing various infectious diseases are transmitted from one host to another by many ways: (a) con-tact, (b) inoculation, (c) ingestion, (d) inhalation, and (e) vectors (Table 10-3). 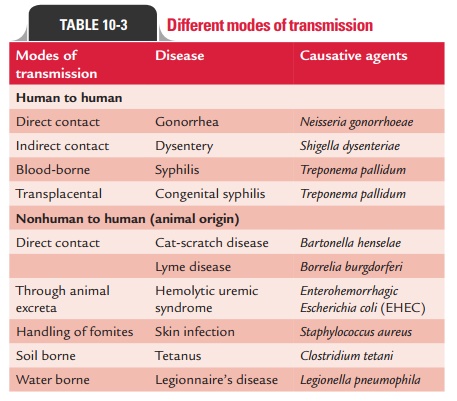 Microorganisms can also be transmitted by indirect con-tact through inanimate objects, such as clothings, handker-chief, toys, etc., called fomites. The fomites, contaminated by microbial pathogens, act as a vehicle for their transmission. Influenza, tuberculosis, and certain superficial fungal infec-tions are examples of diseases transmitted by fomites.

2. Inoculation: Infections can be transmitted by inoculationof microorganisms directly into tissues of the host. For example, tetanus is transmitted by direct inoculation of Clostridium tetani spores present in soil to the injured tissuesin the host. These spores then germinate to vegetative forms of bacteria and migrate along the neural tissues to cause teta-nus. Similarly, rabid dogs through their act of biting inoc-ulate rabies virus directly to host tissue and cause rabies in humans.

3.Ingestion: Ingestion of water and food contaminatedwith microorganisms can transmit a wide variety of micro-bial infections. For example, food poisoning caused by Bacillus cereus is transmitted by rice contaminated with bac-terial spores that survive boiling. If the rice is cooled and reheated, the spores of the bacteria may germinate to the bacteria that produce a heat-stable toxin that induces vomit-ing. Cholera, typhoid, food poisoning, hepatitis A, poliomy-elitis, and many parasitic infections are the other examples of diseases transmitted by ingestion of contaminated food and water.

4.Inhalation: Infections are transmitted by inhalation ofdroplet nuclei that are discharged into the air by coughing, sneezing, or talking. Respiratory pathogens are shed into the environment by patients in secretions from the nose or throat during coughing, sneezing, or talking. Small droplets (less than 0.1 mm in diameter) become airborne as minute particles or droplet nuclei (1–10 mm in diameter), while large droplets fall down to the ground. Infections are transmitted by inhalation of these droplet nuclei containing respiratory pathogen, which remain suspended in air for a long period of time.

The infective agent enters the body by four main routes: (a) genital tract, (b) respiratory tract, (c) gastrointestinal tract, and (d) skin. The pathogens can be transmitted either as vertical or horizontal transmission. 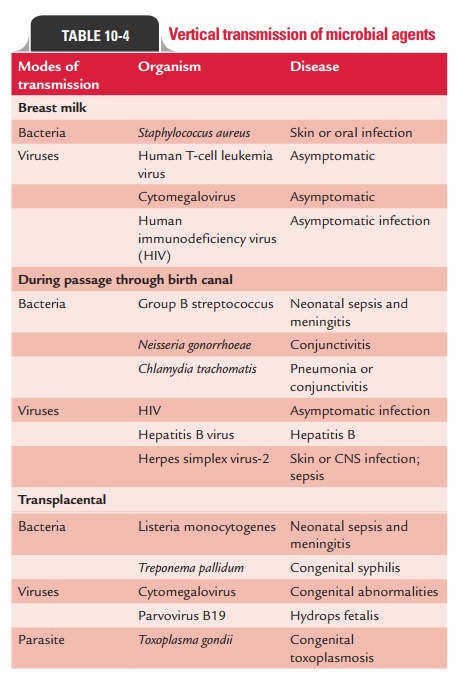 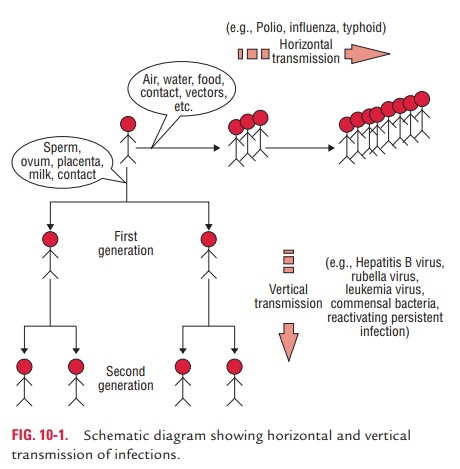