Home | | Microbiology and Immunology | Growth and Multiplication of Bacteria at the Site of Adherence - Stages of Pathogenesis of Infections
Posted On :  19.07.2017 08:44 pm

Bacteria cause diseases by three main mechanisms: (a) inva-sion of tissues followed by inflammation, (b) toxin production, and (c) immunopathogenesis.

Growth and Multiplication of Bacteria at the Site of Adherence

Bacteria cause diseases by three main mechanisms: (a) inva-sion of tissues followed by inflammation, (b) toxin production, and (c) immunopathogenesis. Table 10-6 summarizes a list of bacteria with their virulence factors. 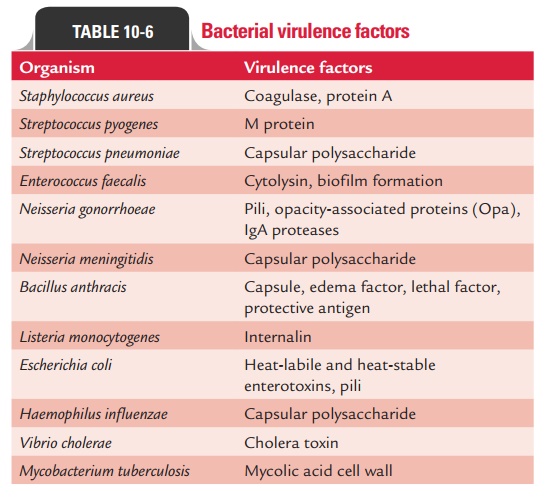 Invasiveness refers to the ability of an organism to invade the host cells after establishing infection. “Invasion” is the term commonly used to describe the entry of bacteria into host cells, implying an active role for the organisms and a passive role for the host cells. For many disease-causing bacteria, invasion of the host’s epithelium is central to the infectious process. Some bacteria (e.g., Salmonella spp.) invade tissues through the intracellular junctions in the cytoplasm. Some bacteria (e.g., Shigella spp.) multiply within host cells, whereas other bacteria do not.

Shigella spp. initiate infection process by adhering to host cellsin the small intestine. There are multiple proteins, including the invasion plasmid antigens (IpA-D), that contribute to the process.Once inside the cells, the shigellae either are lysed or escape from the phagocytic vesicle, where they multiply in the cytoplasm.

Other bacteria (e.g., Yersinia species, N. gonorrhoeae, Chlamydiatrachomatis) invade specific types of the host’s epithelial cellsand may subsequently enter the tissue. Once inside the host cell, the bacteria may remain enclosed in a vacuole composed of the host cell membrane, or the vacuole membrane may dis-solved and bacteria may disperse within the cell and from one cell to another.

Invasion of tissues followed by inflammation is enhanced by many factors, which include: (a) enzymes, (b) antiphagocytic factors, (c) biofilms, (d) inflammation, and (e) intracellular survival.

1. Enzymes: Invasion of bacteria is enhanced by many enzymes.Many species of bacteria produce enzymes that are not intrin-sically toxic but do play important roles in the infectious process. Some of these enzymes are discussed below:

Hyaluronidases are produced by many bacteria (e.g., staphylococci, streptococci, and anaerobes) and aid in their spread through tissues. For example, hyaluroni-dase produced by S. pyogenes degrades hyaluronic acid in the subcutaneous tissue, thereby facilitating the organ-ism to spread rapidly.

Clostridium perfringens produces the proteolyticenzyme collagenase, which degrades collagen (the major protein of fibrous connective tissue), and promotes the spread of infection in tissue.

Coagulase: Staphylococcus aureusproduces the enzymecoagulase, which in association with blood factors coagulates the plasma. Coagulase contributes to the formation of fibrin walls around staphylococcal lesions, which protects bacteria from phagocytosis by walling off the infected area. The enzyme also causes deposition of fibrin on the surfaces of individual staphylococci, which may help protect them from phagocytosis or from destruction within phagocytic cells.

Streptokinase ( fibrinolysin): Many hemolytic strepto-cocci produce enzyme streptokinase, which activates a proteolytic enzyme of plasma. This enzyme is then able to dissolve coagulated plasma and thereby possibly aids in the rapid spread of streptococci through tissues. Streptokinase has been used in the treatment of acute myocardial infarction to dissolve fibrin clots.

IgA1 proteases: Certain pathogenic bacteria produceenzymes IgA1 proteases that split IgA1 at specific pro-line–threonine or proline–serine bonds in the hinge region and inactivate its antibody activity. IgA1 protease is an important virulence factor of the pathogens, such as gonorrhoeae, Neisseria meningitidis, Haemophilus influenzae,and Streptococcus pneumoniae. Production of IgA1 protease allows the pathogens to inactivate the primary antibody found on mucosal surfaces and thereby facilitates the attachment of these bacteria to the mucous membrane.

2. Antiphagocytic factors: Many bacterial pathogens arerapidly killed once they are ingested by polymorphonuclear cells or macrophages. Some pathogens evade phagocyto-sis or leukocyte microbicidal mechanisms by several anti-phagocytic factors; the most important being (a) capsule, (b) cell wall proteins, (c) cytotoxins, and (d) surface antigens.

Capsule:  The  capsule  surrounding  bacteria,  such  as pneumoniae (Fig. 10-3) and N. meningitidis, is the mostimportant antiphagocytic factor. It retards the phago-cytosis of bacteria by preventing the phagocytes from adhering to the bacteria. 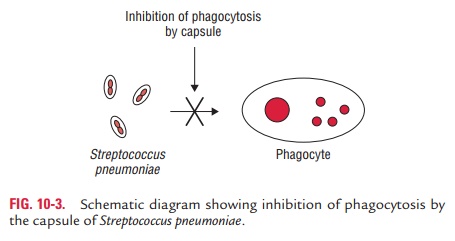 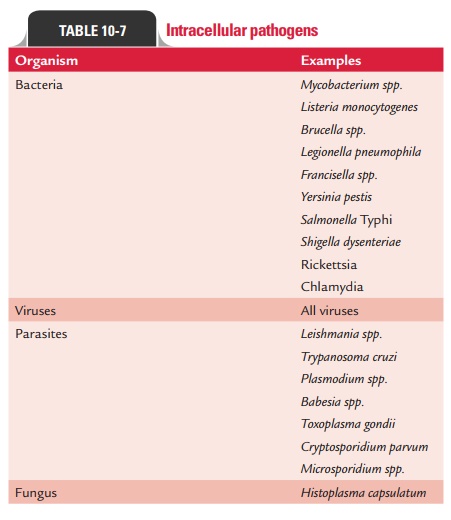 A list of intracellular pathogens is given in Table 10-7

3. Biofilms: The biofilm is an aggregate of interactive bacteriaattached to a solid surface or to each other and encased in an exopolysaccharide matrix. Biofilms consist of single cells and microcolonies of bacteria, all found together in a highly hydrated, predominantly anionic exopolymer matrix. This is distinct from planktonic or free-living bacterial growth, in which interactions of the microorganisms do not occur. Biofilms form a slimy coat on solid surfaces and occur throughout the nature. A single species of bacteria may be involved, or more than one species may coaggregate to form a biofilm. Fungi, including yeasts, are occasionally involved.

Biofilms are important in human infections that are persis-tent and difficult to treat. A few such infections include:

a)        S. epidermidis and S. aureus infections of central venouscatheters;

b)       Eye infections that occur with contact lenses and intraocular lenses;

4. Inflammation: Inflammation is an important host defenseinduced by the presence of bacteria in the body. It is of two types: pyogenic and granulomatous. Pyogenic inflammation is the host defense seen primarily against pyogenic or pus-producing bacteria, such as S. pyogenes. It typically consists of neutrophils and the production of specific antibodies and elevated level of complement. Granulomatous inflam-mation is the host defense seen primarily against intracel-lular granuloma-producing bacteria, such as Mycobacteriumtuberculosis, Mycobacterium leprae, etc. The response consistsof production of macrophages and CD4+ T cells.

5. Intracellular survival: A few mechanisms that aresuggested for intracellular survival of bacteria include (a) inhibition of phagolysosome fusion, (b) resistance to action of lysosomal enzymes, and (c) adaptation to cyto-plasmic replication as follows:

·           Bacteria (such as Chlamydia, M. tuberculosis) that interfere with the formation of phagolysosomes in a  hagocyte can survive intracellularly and evade host defense pro-cess. These bacteria live within cells and are protected from attack by macrophages and neutrophils. The bac-teria that do not interfere with the formation of phagoly-sosomes are otherwise killed inside the phagocytes.

·           Presence of capsular polysaccharide in Mycobacteriumlepraemurium and mycoside in M. tuberculosis makesthese bacteria resistant to action of lysosomal enzymes.

·           Certain bacteria, such as rickettsiae, escape from the phagosome into the cytoplasm of the host cell before the fusion of phagosome with lysosome takes place and hence continue to remain intracellular

Toxins produced by bacteria are generally classified into two groups: exotoxins and endotoxins.

1.   Exotoxins: Exotoxins are heat-labile proteins that are pro-duced by several Gram-positive and Gram-negative bacteria. These are bacterial products, which are secreted into tissues and directly harm tissues or trigger destructive biological activities (Fig. 10-4). The genes coding for these proteins are frequently encoded on plasmid or on bacteriophage DNA. Some important toxins encoded by plasmids are tetanus toxin of C. tetani and heat-labile and heat-stable toxins of enterotoxigenic E. coli. Toxins encoded by bacteriophage DNA are cholera toxins, diphtheria toxins, and botulinum toxin. 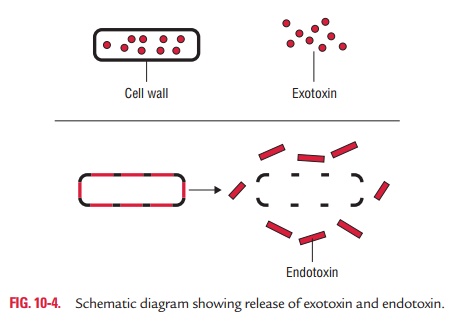 Superantigens: Superantigens are special group of toxins.These molecules activate T-cell nonspecifically by binding simultaneously to a T-cell receptor and major histocom-patibility complex class II (MHC II) molecules on another cell, without requiring antigen. Nonspecific activation of T cells results in a life-threatening autoimmune-like response by producing a large amount of interleukins, such as IL-1 and IL-2. Furthermore, stimulation of T cells by superantigen can also lead to the death of activated T cell, resulting in loss of specific T-cell clones and that of their immune response. Staphylococcal enterotoxin (toxic shock syndrome toxin) of S. aureus and erythrogenic toxin of type A or C of S. pyogenes are examples of superantigens.

2. Endotoxins: The term endotoxin was coined in 1893 byPfeiffer to distinguish the class of toxic substances released after lysis of bacteria from the toxic substances (exotoxins) secreted by bacteria. 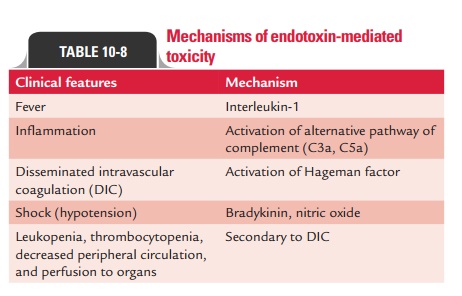 Biological activity of endotoxin: Gram-negative bacteriaproduce endotoxin during infection. The toxicity of endo-toxin is low in comparison with exotoxins. All endotoxins usually produce the same generalized effect of fever and shock. The lipid A protein of LPS is responsible for endo-toxin activities (Table 10-8). The endotoxin binds to specific receptors, such as CD14 and TLR4, present on macro-phages, B cells, and other cells. Endotoxin exerts profound biological effects on the host and may be lethal. Biological activities of the endotoxins include the following:

·           Mitogenic effects on B lymphocytes that increase resis-tance to viral and bacterial infections.

·           Production of gamma interferon by T lymphocytes, which may enhance the antiviral state, promote the rejection of tumor cells, and activates the macrophages and natural killer cells.

·           Production and release of acute-phase cytokines, such as IL-1, TNF-a (tumor necrosis factor-alpha), IL-6, and prostaglandins.

Endotoxic shock: Endotoxins at low concentration inducea protective response, such as fever, vasodilation, and activation of immunity and inflammatory response. However, endotoxins at very high concentration, as seen in blood of patients with Gram-negative bacterial sepsis, cause a syndrome of endotoxic shock. Endotoxic shock is characterized by fever, leukopenia, thrombocytope-nia, sudden fall of blood pressure, circulatory collapse, and sudden death. This is because high concentration of endotoxin can activate the alternative pathway of complement and cause vasodilatation and capillary leak-age, resulting in high fever, hypertension, and shock. It also causes activation of blood coagulation pathway, leading to disseminated intravascular coagulation. Endotoxins are not destroyed by autoclaving; hence infu-sion of sterile solution containing endotoxins can cause serious illness.

Detection of endotoxins in medical solutions: Endotoxins areomnipresent in the environment. Solutions for human use (such as intravenous fluids) are prepared under carefully controlled conditions to ensure sterility and to remove endotoxin. Representative samples of every manufacturing batch are checked for endotoxins by one of two procedures: (a) limulus lysate test or (b) rabbit pyrogenicity test.

·           Limulus lysate test: The test depends on the ability ofendotoxin to induce gelation of lysates of amoebocyte cells from the horseshoe crab Limulus polyphemus. Test kits are commercially available. It is simple, fast, and sensitive to detect endotoxin at a level of 1 ng/mL.

·           Rabbit pyrogenicity test: The test depends on the exquisitesensitivity of rabbits to the pyrogenic effects of endo-toxin. In this test, a sample of the solution to be tested is injected intravenously into the ear veins of adult rab-bits, while the rectal temperature of the animal is moni-tored. Careful monitoring of the temperature responses provides a sensitive and reliable indicator of the pres-ence of endotoxin in the solution.

In certain diseases, the symptoms are caused not by the organism itself, but due to immune response to the presence of organisms. For example, immune complexes deposited in the glomerulus of the kidney cause poststreptococcal glo-merulonephritis. Antibodies that are produced against the M proteins of S. pyogenes cross-react with joint, heart, and brain tissues producing disease manifestations of rheumatic fever.

Similarly, the host immune response is an important cause of disease symptoms in patients suffering from syphilis caused by T. pallidum, Lyme disease caused by Borrelia, and other diseases.