Trade Between Tamizhagam and Rome

Trade had flourished between the Tamil country and Rome even when Rome was a republic.

Trade Between Tamizhagam and Rome

Trade had flourished between the Tamil country and Rome even when Rome was a republic. Roman coins and artefacts of the period have been excavated at Arikamedu, near Pondicherry, which is said to have been an Indo-Roman trading station. Before the first century of the Common Era, Roman ships did not venture past the western coast of India around Cape Comorin. So the ports on the west coast were the main ports involved in trade with Rome. From the west coast, the Roman traders travelled overland through the Palghat pass to production centres further east. Kodumanal and Padiyur in Erode and Vaniyampadi near Salem had mines producing beryl, which was a gemstone in high demand in Rome. In addition, Chennimalai near Erode produced iron and steel (remnants of furnaces and slag have been found here), which was also exported to Rome. This is the reason why the finds of Roman coins of the earlier period are concentrated in Coimbatore, Erode, Salem and Karur districts. 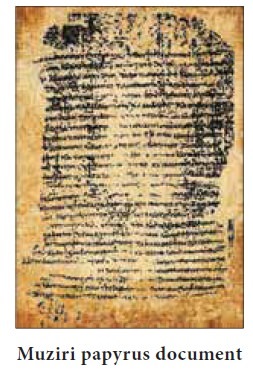 By the end of the first century CE, however, Roman ships had begun to sail to ports on the Coromandel (east) coast of Tamil Nadu, and many of these ports are mentioned in the Periplus. On the west coast, the main ports were Naura (Cannanore) and Tyndys/Tondi (Ponnani), which were said to be on the northern border of the Tamil country of the Cheras. Musiri or Muziris was an important port located further south. Traditionally identified as Kodungallur, the recently undertaken Muziris excavation locates the port at Pattanam, a few kilometers away. Muziris was probably the busiest port on the coast. A recently discovered trade agreement written on papyrus between a merchant of Muziris and a merchant of Alexandria indicates the large consignments of cargo carried even by individual merchants. According to Sangam poetry, Musiri was the centre of two circuits of trade. Boats came in from the interior carrying rice and took back fish, which indicates a kind of barter trade in the primary consumption goods. At the same time, sacks of pepper were brought to the market and were exchanged for gold, which came in the ships, which in turn, was transported on barges to the shore.

The ships sailing from India to Rome carried pepper, a large quantity of pearls, ivory, silk cloth, spikenard (a fragrant oil from the Gangetic region which was much in demand for personal use among wealthy Romans) malabathrum, the leaf of the cinnamon tree, again used as an aromatic, sapphire, beryl, diamonds and tortoiseshell. As Roman ships began to trade with the Coromandel coast, the fine cotton textiles of the region were also exported. From Rome, the main imports were coin, topaz, antimony, coral, crude glass, copper, tin and lead and wine. Clearly, the value of the exports from the Tamil region was much higher than the value of imports from Rome, and the volume of trade peaked in the second half of the first century CE, during the reign of Emperor Tiberius. The growing trade imbalance, which had to be met through exports of coins or silver, became a source of concern. There was a complaint that each year the trade to India caused a drain of 55 million sesterces to Rome. Ultimately Emperor Vespasian passed laws to curb the luxury consumption of the wealthier classes in Rome, and imports from Indiasubsequently comprised only cotton textiles and pepper, which were relatively low-value commodities.

A further change in the trading pattern evolved because of the increased vulnerability of the traditional overland silk route. Silk cloth and yarn from China were carried by sea to the Coromandel ports, from where they were transshipped to Rome. Information about the trade relations of the Tamil region with the south-east and further east is very scanty. However, tortoiseshell (an important export to Rome) was sourced from islands near Malaya in the Indian Ocean, while silk came from China. There was also constant interaction with Java and Sri Lanka, which are mentioned in Tamil literature almost as extensions of Tamil Nadu, and Buddhism was probably the connecting link, which brought these countries together.

The expansion of overseas trade and shipping brought foreign merchants and sailors to the Tamil region. Because of the seasonal nature of the monsoon winds, and the prevailing levels of technology, long voyages necessitated long periods of stay in host countries. We find interesting insights into the response of Tamil society to the presence of these foreign merchants. Puhar was the most important port on the Coromandel coast. Here, yavana merchants lived in especially ear-marked residential quarters in the harbour area. Though they were allowed to trade freely, and were noted for their attractive goods, there was a good deal of reserve in the attitude of the local Tamils to foreign merchants who were considered an alien, barbaric people, who spoke a harsh-sounding language.

Other yavanas also came with the merchants. The fortress of Madurai was guarded by yavanas carrying large swords. There are also references to yavana

metal workers and carpenters, who were described as “hard-eyed” probably because they had grey or blue eyes. All these may not have been strictly of Greek origin, as implied by the term yavana, which had become a generic word to denote persons from the eastern Mediterranean regions.

Trade and the Economy: The Larger Picture

The magnitude of the expansion of trade that is evident in this period could have been achieved only through major changes to the production base of the economy. Even in the case of primary products like mined gemstones like beryl, increased demand would have involved more labour to work the mines, more implements and more capital. In the case of textiles, there would have been a considerable increase in weaving activity and in the subsidiary activities like spinning to produce the yarn for weaving, and perhaps even growing more cotton to increase the supply of the raw material. Growing trade thus would lead to a considerable degree of expansion of the economy.

Merchants became more visible and important as trade grew. There were merchants dealing with specific products like food grains, cloth, gold and jewellery in the markets of the big cities. Merchants were also involved in overseas trade, as well as overland trade. Thus, the circuits of trade became more specialised with institutionalised arrangements to support the expanding commercial activities.

One of the most important questions that arises is what was the extent to which money was used in commerce. This is difficult to answer. In all pre-modern economies, barter was an important medium of exchange. For instance, salt merchants of the Tamil region carried salt in their carts from the coastal areas of the east inland, travelling together in g roups. It is more than probable that they exchanged their salt for other goods and necessities, rather than selling the salt for money. However, the extent of the overland and overseas trade, as well as the descriptions of the city markets in the literature would imply that money was the main medium of exchange. 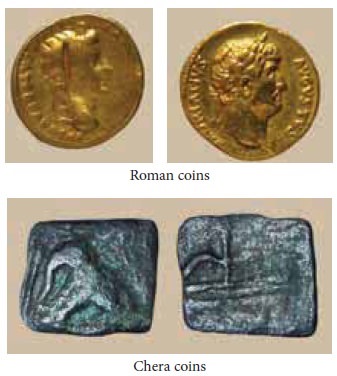 The Roman coins that have been found in various centres substantiate this inference. Locally, imitations of Roman coins were also minted, primarily to increase the supply of money in circulation. Fairly large volumes of Chera coins have also been found in the bed of the Amaravati river. The very large quantities of Indo-Greek and Kushana coins found in North India would lead to a similar conclusion about the level of monetisation. All this would lead to the inference that there was considerable use of money as the medium of exchange in the ancient period.

The centuries in discussion in this chapter were not a period of great political stability. With the exception of Kanishka, the invaders in North India did not consolidate their conquests by establishing large, stable empires. Even Kanishka ruled only for a relatively short period, and his empire slowly fell apart after his death. The Tamil region did not have the unifying force of a large empire and was fragmented into relatively small kingdoms and even smaller principalities. The most important development of this period both for the north and the south was the great expansion of trade. From the north, trade relations extended to China in the east and up to the known Mediterranean world in the west. For the south, in addition to internal trade and circuits of exchange, there was exponential growth in overseas trade to the west, and also to the east up to China. The result would be seen in a considerable degree of economic growth and increased prosperity, which is evident from the excavations of cities as well as the descriptions of urban centres in Tamil poetry.