The first question that arises is: why and how did nomadic tribes turn to war and conquest?

The Indo-Greek kingdoms in north-western India were ousted by various nomadic tribes from Central Asia, known as the Sakas (Scythians), Parthians (Pahlavis) and Kushanas (yueh-chi or yuezhi tribes in Chinese). In spite of the fact that they followed the Greek practice of issuing vast amounts of coinage with their names and titles (mostly “king of kings”), this is a very confusing period in our history. It is a daunting task to try and work out the lineage of various ruling clans and dynasties that came into India.

The first question that arises is: why and how did nomadic tribes turn to war and conquest? The advent of these tribes in India arose as a result of a complex sequence of migrations and political developments in Central Asia. 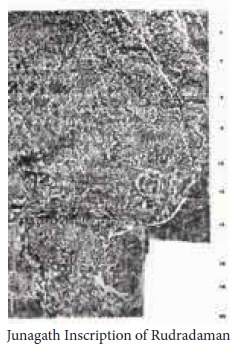 In the eastern part of Central Asia, the Yueh-chi were being pushed westward by the Chinese who had built the Great Wall to keep out nomads and to protect their villages and agriculture from their raids. The Yueh-chi, in turn, turned westward and pushed the Sakas towards eastern Iran, where the Parthians had become rulers following the collapse of the Seleucid empire. As a curious historical event, in 58 BCE, the independent Parthian kingdom of eastern Iran was established by the Parthian Vonones (or Azes, according to some historians). This year was taken to denote the start of the Vikram samvat era, the Indian calendar.

The Sakas were pushed back from eastern Iran by the Parthian ruler Mithradates (188–123 BCE), and they then turned to north-western India and finally settled in the region between the Indus valley and Saurashtra. The first Saka ruler in India was Maues or Moa/Moga (20 BCE to 22 CE). He occupied Gandhara, driving a wedge into the Indo-Greek kingdoms, but it was his successor Azes who finally destroyed the last remnants of the Indo-Greek kingdoms and extended Saka rule as far as Mathura.

In India, the Sakas became assimilated into Hindu society. They began to adopt Hindu names and religious beliefs, so much so that their coins had representations of Hindu gods on one side. The Sakas appointed kshatrapas or satraps as provincial governors to administer their territories. Many of the kshatrapas titled themselves mahakshatrapas and were virtually independent rulers.

One of the most famous of the Saka kshatrapas was Rudradaman (130–150 CE). His exploits are celebrated in the famous rock inscription of Junagadh (in Gujarat). According to this inscription, he had even defeated the Satavahanas in battle. His name indicates that the process of assimilation into Indian society was complete by that time.

The Sakas were displaced by the Parthian Gondophernes, who first conquered Kabul (c. 43 CE). He lost the Kabul valley to the Kushanas, but he was successful against the Sakas in India. Records of his rule have been discovered in Peshawar district. The Sakas approached the Kushanas (yueh-chi) for war help against the Parthians. The first Kushana king who conquered Afghanistan was Khujula Kadphises, followed by Wima Kadphises. The two kings extended Kushana territory to Gandhara, Punjab and as far to the east as the Ganga-Jumna doab till Mathura.

The best known of the Kushana kings was Kanishka, who is thought to have ruled from 78 CE till 101 or 102 CE. Ironically, 78 CE is held to be the beginning of the “Saka era” in the Indian calendar. Historians are, kings”, “Caesar”, “lord of all lands” and by other such titles.

Unfortunately, the titles did not leave much room on the coins for the actual name of the ruler. Hence our information on the Kushana kings tends to be very uncertain. Kanishka’s coins as well as his statue found near Mathura show him dressed in a belted tunic along with overcoat and wearing boots, testifying to his Central Asian origins. 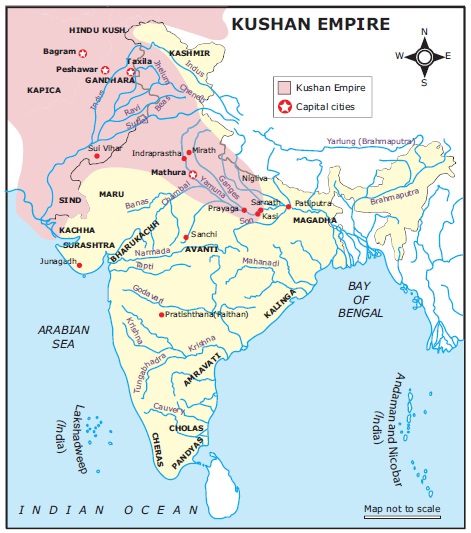 The Karakoram highway, a joint project between China and Pakistan, which was completed in 1979, has yielded great dividends for archaeologists and historians. The rock of Hunza mentions the first two Kadphises and the Kusanadevaputra (son of God) Maharaja Kaniska. This inscription confirms that Kanishka’s empire stretched from Central Asia till eastern India. Buddhist sources record that he had conquered Magadha and Kashmir and Khotan in Sinkiang.

The artefacts found along the Karakoram highway also establish that this was the route taken by Buddhist monks travelling to China on their mission to spread Buddhism. Merchants followed the missionaries, so this became a major commercial route for the import of Chinese silk and horses from the West into India. Indian merchants established themselves in various towns in Central Asia and seized the opportunity to become intermediaries in the luxury trade between China and the Roman Empire, since merchants from the West did not want to venture further east beyond Central Asia.

Kushana kings, mostly with their names ending with –shka (among them Huvishka and Vasishka as well as later Kanishkas and even Vasudeva), ruled for at least one century more, but nothing much is known about them. Clearly the empire was beginning to break down, and the satraps (the Kushanas also continued the practice of appointing satraps to govern the provinces) were able to set themselves up as independent rulers in various regional capitals.

During the reign of Kushanas, there was great creative energy when art and literature flourished. This was partly due to royal patronage and partly due to other factors, like the growing ascendancy of Mahayana Buddhism, which allowed the representation of the person of Buddha in human form. The Greek influence led to an Indo-Greek style of sculpture and art commonly referred to as Gandhara art. Statues of Buddha, sculpted particularly in Taxila and the north-western regions, show him in graceful garments, surrounded by cherubs and leaves inspired by the Greek tradition. But mention must also be made of the red sandstone sculpture with intricate carving produced near Mathura.

The Buddhists began to carve out rock caves in the hills of western India, which served as religious centres with chaityas and viharas, stretching from the Ajanta caves to the Kanheri caves in Mumbai. Large statues of Buddha were sculpted in these caves as a part of the Mahayana tradition, and in later centuries, they were further embellished with murals of extraordinary beauty, as seen in the Ajanta caves.

Kanishka was the patron of Buddhist philosophers such as Asvaghosha, Parsva and Vasumitra, as well as the great Buddhist teacher Nagarjuna. Asvaghosha is known for his Buddhacharita and is celebrated as the author of the first Sanskrit play, Sariputraprakarana, in nine acts. The great dramatist Bhasa, whose plays were re-discovered only about a hundred years ago in South India, most probably belonged to this period.

Among the Hindu treatises, we find the Manusmriti, Vatsyayana’s Kamasutra and Kautilya’s Arthasastra taking final shape by the second century CE.