India’s interaction with the Greeks began with the invasion of north-western India by Alexander (327–325 BCE) and his conquest of the Punjab region.

India’s interaction with the Greeks began with the invasion of north-western India by Alexander (327–325 BCE) and his conquest of the Punjab region. When he began his return march to the West, he left the conquered territories under provincial governors. One of Chandragupta Maurya’s early military expeditions was against these foreign intruders.

Seleucus Nicator, one of Alexander’s most capable generals, succeeded in making himself the master of a vast territory from Phrygia (Turkey) to the river Indus after 311BCE. Within a few years, probably around 305 BCE, Chandragupta waged a war against Seleucus and defeated him. However, this was not the savage defeat that happened to Alexander’s governors. Instead, Chandragupta made a peace treaty with Seleucus. Seleucus surrendered the land he had conquered up to the Indus and received 500 war elephants in return. There is also mention of a marriage agreement. The treaty also led to the establishment of diplomatic relations between the Greeks and the Mauryan emperor. Megasthenes was sent to the Mauryan capital Pataliputra as the Greek ambassador.

Bindusara, Chandragupta’s son, continued to maintain friendly ties with the Greek kingdoms in West Asia. Greek historians refer to ambassadors sent by Ptolemy II of Egypt and to Bindusara’s correspondence with Antiochus of Syria. Asoka also continued the tradition of friendly relations with the Greek kingdoms. His Rock Edict (13) mentions five yona kings, identified as Antiochus II Theos of Syria, Ptolemy II Philadelphus of Egypt, Antigonus Gonatas of Macedonia, Magas of Cyrene and Alexander of Corinth. This also indicates that the relations of Asoka with the Greeks extended beyond West Asia well into the heartland of Greece.

We now come across the term yavana (or yona) for Greeks, which was used throughout India. The word was derived from the Persian word yauna, which referred to Greeks. In India the term yavana was used to denote all persons of Greek origin, including those of mixed race and even the Phoenicians.

This regular interchange of ambassadors and correspondence, as well as the extension of the Mauryan Empire till Afghanistan, facilitated regular trade from India to the West as far as Egypt. Trade was carried on by the overland route via north-west Afghanistan (Bactria) and also partly by the coastal route along the Persian Gulf and Red Sea. A variety of luxury goods, including ivory, tortoise shell, pearls, indigo and other dyes, aromatic substances like spikenard or nard (a fragrant oil from the Gangetic region) and malabathrum (leaf of cinnamon, used as an aromatic) and rare woods were exported from India.

The cultural influence of the Greeks is evident from the capitals of monuments at Pataliputra. Many historians argue that the elaborate administrative institutions of the Mauryan Empire drew inspiration from the administrative systems of the Persians and Greeks. The eventual rise of Indo-Greek kingdoms in western India strengthened these cross-cultural influences and gave rise to a distinct school of art.

The Seleucid Empire, which extended from northern Afghanistan (Bactria) to Syria, began to weaken and disintegrate after 250 BCE. The governor of Bactria, Diodotus, revolted against Antiochus II and became the independent ruler of Bactria. In 212 BCE, the king of Bactria was a Greek named Euthydemus. The Seleucid emperor Antiochus III was unable to subjugate Euthydemus and agreed to negotiate a settlement with him, since Antiochus himself needed to turn his attention to his dominions in the West. But Antiochus III did come down the Kabul river and managed to defeat the local Indian king, known as Subhagasena. Nothing much is known about this king. It can be inferred that the mention of an independent king in the region might be an indication of the weakening of the central authority of the Mauryan Empire after Asoka’s death in 236 BCE.

Euthydemus’s son Demetrius succeeded him (c. 200 BCE), and another Demetrius, probably Demetrius II, was the first known Indo-Greek king (c. 175 BCE). The distinguishing feature of the reign of the Indo-Greek kings was their exquisite coinage. Minted in the same style as Greek coins of silver, they carried the portrait of the reigning king on one side with his name. The coins thus give us a visual picture of the kings, who are represented in various kinds of headgear and with distinctive facial and physical features. Extensive collections of these coins have been found from the period, which makes it possible to reconstruct the lineage of the Indo-Greek kings with certainty.

Indian accounts of the period refer to the yavana invasion of Ayodhya (Saketa) and further east into the Magadha territory. However, since the Greeks seem to have been beset by internal dissensions, they did not retain any of this territory. They ceded land to Pushyamitra, the Sunga emperor who had usurped the throne after the last Mauryan ruler. Numismatic evidence also proves Demetrius’s association with India. He issued bi-lingual square coins with Greek on the obverse and Kharoshti (the local language of north-western Pakistan) on the reverse. 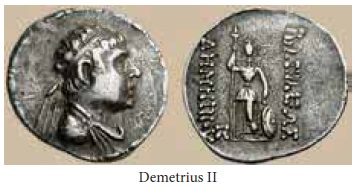 At about 165 BCE, Bactria was lost to the Parthians and Sakas. After this, the yavanas continued to rule in central and southern Afghanistan and north-western India. The Greeks continued to be beset with internal squabbles among many claimants to power, and the names of more than thirty kings can be identified from their coins. It is possible that they all ruled small pockets as autonomous rulers and issued their own coinage.

Menander (c.165/145–130 BCE) was the best known of the Indo-Greek kings. He is said to have ruled a large kingdom in the north-west of the country. His coins have been found over an extensive area ranging from the valleys of the Kabul and Indus rivers to as far as western Uttar Pradesh. This gives a good indication of the extent of his kingdom. Though he does not look like a great and heroic conqueror as seen in his coins, he is said to have raided the Gangetic region along with the kings of Panchala and Mathura. King Kharavela of Kalinga mentioned in the Hathigumpa inscription, was not able to stop him. Menander successfully attacked Pataliputra, but retreated without consolidating his conquest. Interestingly, in his coins, he is described as “king” and “soter” or saviour, and not as a great conqueror.

Menander is mainly remembered as the eponymous hero of the Buddhist text, Milinda-pinha (questions of Milinda), in which he is engaged in a question-and-answer discussion on Buddhism with the teacher Nagasena. He is believed to have become a Buddhist and promoted Buddhism. 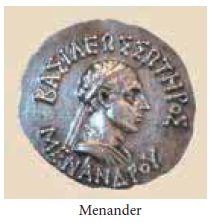 Another Indo-Greek king whose name is remembered is Antialcidas (or Antialkidas), c. 110. He is known to us primarily because his emissary, Heliodorus, who was sent to the court of King Bhagabhadra erected a pillar or garuda-dhvaja with its capital adorned by a figure of Garuda, in honour of God Krishna (Vasudeva). Heliodorus had evidently become a follower of Vishnu. (The pillar stands in isolation in the middle of a open ground in Vidisha, Madhya Pradesh.)

Indian interactions with the Greeks was not limited to the Indo-Greek kings. Greeks were becoming known and their presence recorded throughout the sub-continent. Merchants, sailors and many others of Greek origin were travelling to India, so there was a continued interaction with the Greeks.