Early humans lived in jungles along with animals. They used the stone tools to protect themselves, drive away animals, dig out roots, shoots etc.

Early humans lived in jungles along with animals. They used the stone tools to protect themselves, drive away animals, dig out roots, shoots etc. The most important thing is that they ate everything raw including flesh. They did not know the use of fire in the beginning. At first, dog was their good companion. Wild animals ran away when dogs barked. Humans tamed dog as their pet at first. They took it wherever they went. Later they started rearing cattle as they did not harm them and were very useful to them. They observed some grains growing along the river side. They ate them and found it very tasty. They observed that the scattered grains were only eaten up by birds. They were keen observers. Early man found that the grains grow with the help of sunshine and rainfall. Thus, they learnt the art of cultivation. 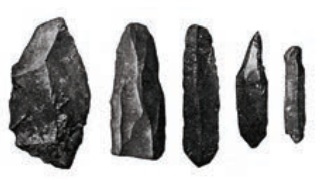 Humans noticed forest fire. At first they were afraid of fire. They found some animals dead due to fire. They ate the flesh of the burnt animals. It tasted good. They also observed that the spark came out by scratching two stones together. Since then, they ate cooked food. 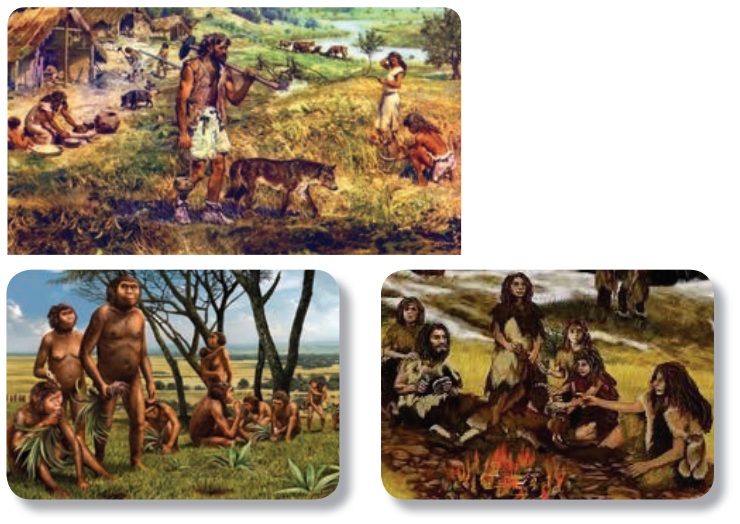 Museum is a place where objects which are rare and used by our ancestors are preserved. These give information about the lives of people. Therefore it is important to preserve the remains of the past. Remains are the objects or things used by the people of the past which got buried under the Earth.

* Early man used Quartzite, a type of stone for making tools and weapons.

* A type of stone called flint stone was used to produce fire.

Early humans did not know to grow crops. They wandered in all the landscapes in search of food. They ate whatever they got and drank water from natural sources. This kind of life was called nomadic life. They wore leaves, skins of animals, barks of trees to cover their body. They lived in caves and holes of big trees. 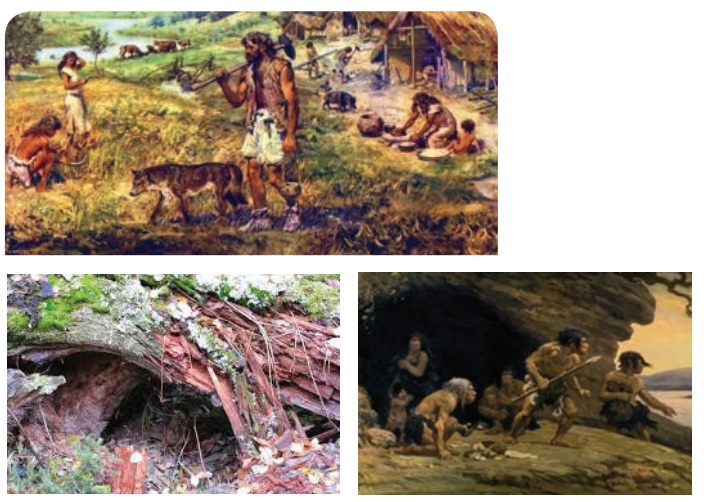 Stones were sharpened as tools by them. They made it with the help of other stones. These sharp tools helped to hunt animals and tear the flesh of animals.

They used bones, horns, stones, skin, branches of trees and sticks as their tools and weapons. This stage of development in history was called New stone age or Neolithic age. 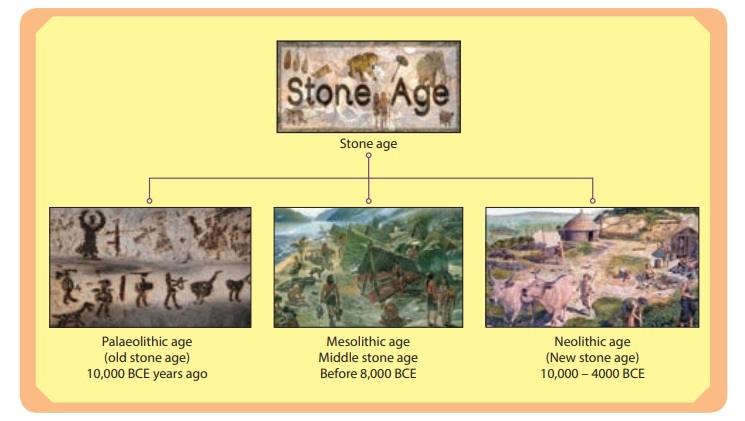 • What was the food eaten by early humans?

• Why did early humans live in the caves?

The early humans led a nomadic life. They did not know how to build houses. So they lived in caves.

•Why did they eat raw flesh?

In the beginning, the early humans did not know the use of fire. They did not know cooking. So they ate raw flesh.

The purpose of using them are given below: 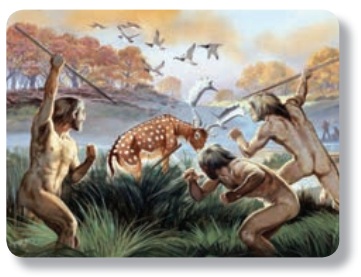 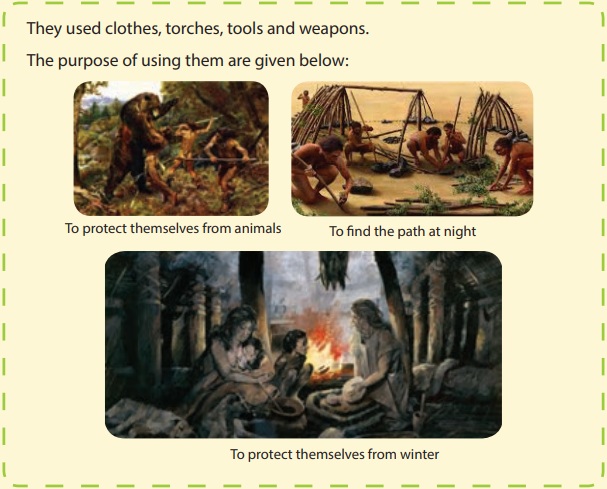 They drew paintings of what they saw around them on the walls of the caves where they lived. Distinguish between

When the stones rolled down the mountains they acquired round shape. Humans observed them and thus wheel was invented. In the beginning it was made of stone and later by wood. This was the first scientic invention. 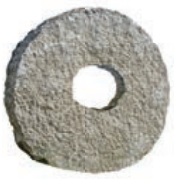 Pottery was also one of the greatest inventions by humans. The baked pot was strong and looked beautiful.Stone Age people made all the household artifacts (articles made by humans) by themselves.

Stone houses were built. The roofs of these houses were thatched with sticks and husks. After this several inventions were made, humans started living in a settled life. 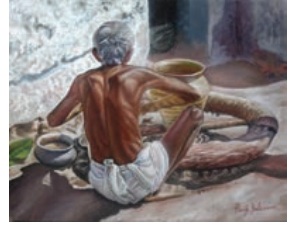 The period which has written documents are called historical period.These documents help us to know about the life styles of the people, events, food habits, culture, art, architecture, literature etc.,

Agriculture was an important activity in the history of humans. They started cultivating crops. They sowed seeds and harvested crops. They found it convenient to live along the river as crops grew well near the river.

Burial pots called urns have been excarated in which the dead bodies were placed and buried under the ground.

At the end of new Stone Age copper was invented. In this age both stone and copper were used. This period was called Chalcolithic Age. Bronze was produced when copper, zinc and tin were mixed together. The period when people made tools from an alloy called bronze was called Bronze Age.

Tell the names of some iron tools found at your home.

After this, humans found iron and started using iron tools and weapons. This age was called Iron Age. In this age household articles, agricultural tools etc. were made of iron. Metals were alloyed and tools were made.

You can collect – coins, potsherds, metal objects etc. Most of these objects are dug out from the ground. Such objects are preserved in the museum. In Tamilnadu, Athichanallur, Arikkamedu and Keeladi are the sites where the objects used by the people of the past are excavated. Still research is going on in these sites.

Find the age of period 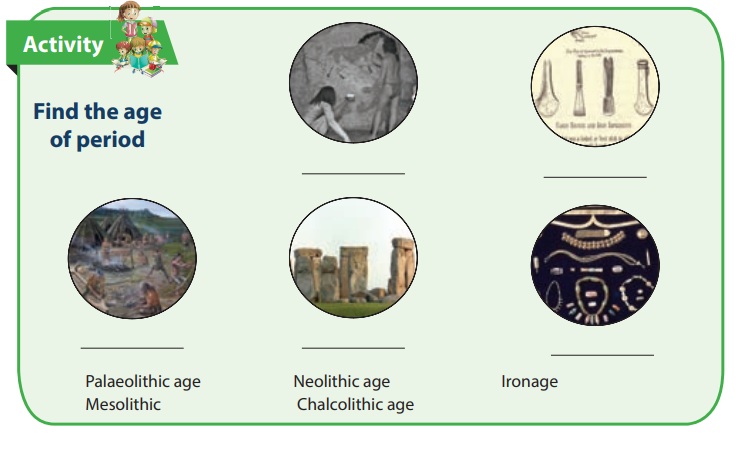 If you come across any old, traditional objects of historical value try to collect and save them. 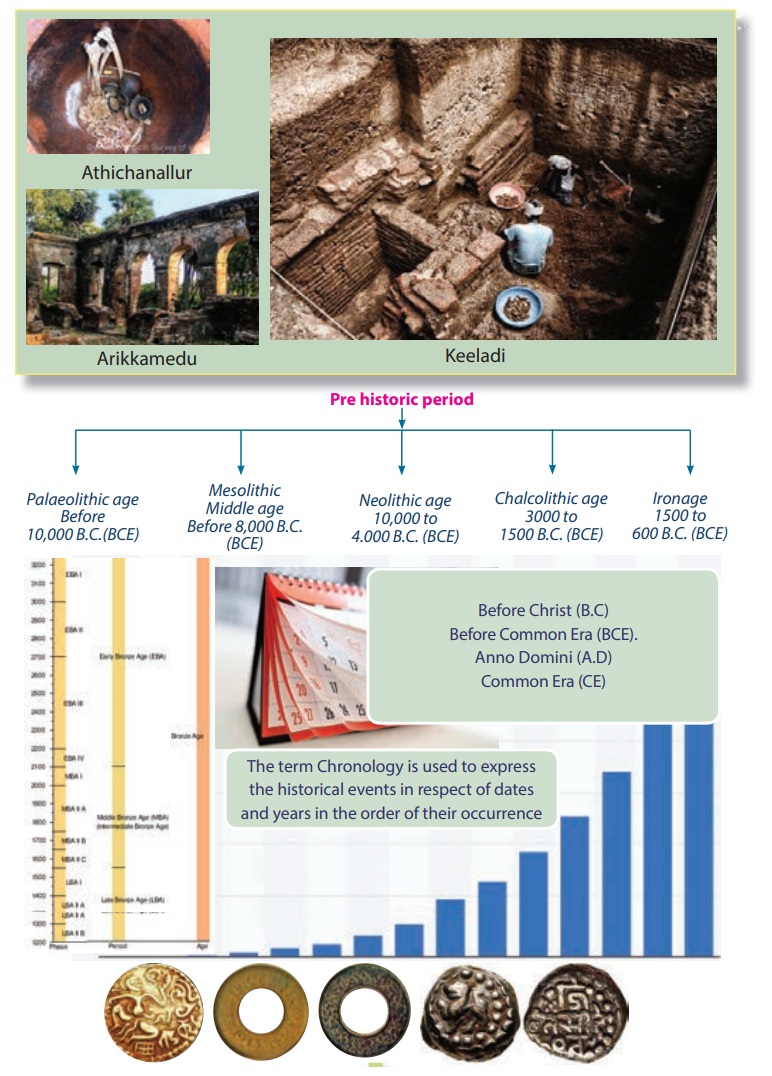 Study of coins is called Numismatics. All types of coins right from metals to paper help to learn about the kings, and economic conditions of that period.

Scripts inscribed about a king’s rule, people or society on rocks and walls are called inscriptions, usually they are found on temple walls. 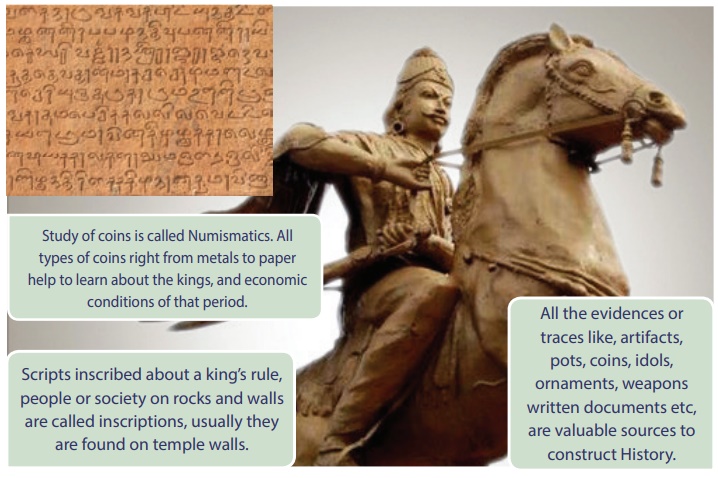