Chapter: Medical Microbiology: An Introduction to Infectious Diseases: Infections of the Fetus and Newborn

Torch Complex - Infections of the Fetus and Newborn

When bacterial, spirochetal, and chlamydial infections have been reasonably excluded from consideration, other possibilities can best be remembered by the convenient acronym TORCH (toxoplasmosis, other [viruses], rubella, cytomegalovirus, herpes simplex).

When bacterial, spirochetal, and chlamydial infections have been reasonably excluded from consideration, other possibilities can best be remembered by the convenient acronym TORCH (toxoplasmosis, other [viruses], rubella, cytomegalovirus, herpes simplex). This term comprises major infections that can be particularly severe if acquired prenatally. There is often significant overlap of clinical manifestations associated with the various agents in the TORCH complex. Common features may include low birth weight, rash, jaundice, and hepatosplenomegaly. On the other hand, many newborn infants with TORCH infections can go undiagnosed, because the clinical signs may not appear until weeks, months, or even years later. For example, congenital cytomegalovirus infection may be manifested only as mild mental retardation and/or hearing loss that may not become apparent until after the first year of life. Toxoplasmosis also presents a dilemma. It is estimated that as many as 1 in 200 pregnancies in the United States is complicated by primary infection with Toxoplasma gondii, which is usually subclinical. Of these cases, approximately 30 to 40% result in fetal infection, but only 8 to 11% of the infected off-spring demonstrate clinical symptoms in the newborn period. The remainder are at risk, however, and can ultimately develop neurologic deterioration and/or chorioretinitis, which may not be recognized until 5 or more years later. These observations only par-tially illustrate the importance of TORCH complex infections and our relative impotence in controlling many of them.

Of the array of miscellaneous agents grouped in the “other” category, three viruses deserve specific mention. If the mother has active infection with hepatitis B virus during pregnancy, the risk of natal or postnatal transmission to the infant is high (range, 20 to 80%, depending on the status of virus activity). Although it is unlikely that clinical dis-ease will be apparent in the newborn period, it is important to promptly undertake specific measures to prevent infection in the infant when the mother is infected. They include administration of hepatitis B immune globulin immediately after birth as well as immu-nization of the infant with hepatitis B vaccine. The chance of maternal transmission of the human immunodeficiency virus (HIV), either transplacentally or natally, is estimated to be between 13 and 40%. Prenatal antiretroviral treatment of infected mothers can reduce this risk by 60 to 70%. Primary varicella is infrequent in pregnancy. If the mother devel-ops varicella less than 5 days before or 2 days after delivery, however, the risk of severe neonatal varicella is significant, with a mortality of approximately 20%. It is recom-mended that the infant be given varicella – zoster immune globulin (or zoster immune globulin) immediately in an attempt to prevent or modify subsequent disease. Maternal zoster infections are not associated with a significant risk to the offspring, presumably be-cause of adequate transplacental transmission of specific antibody. 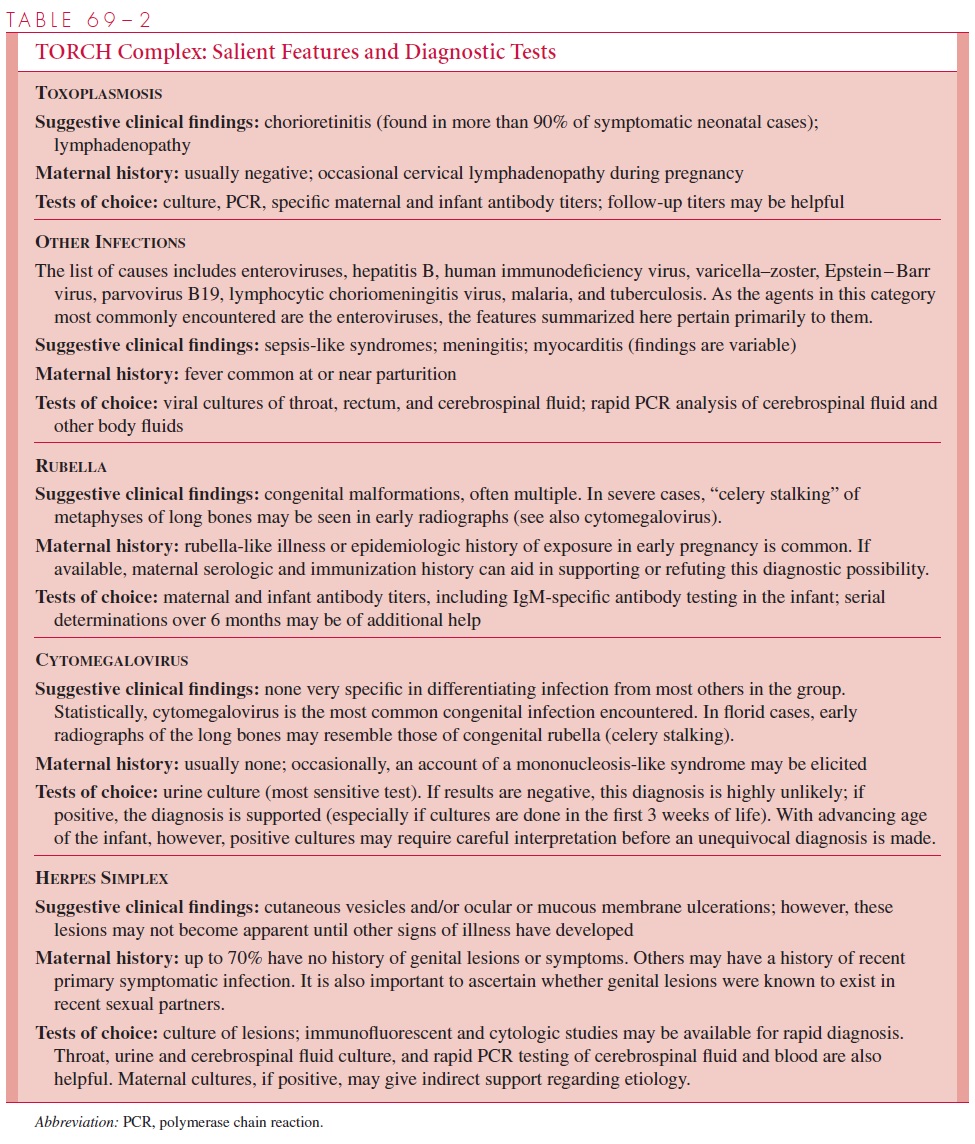 The approach to a suspected TORCH complex infection requires some thought in selection of appropriate tests. Table 69 – 2 summarizes the major clinical and historic fea-tures of specific agents and the diagnostic procedures that can be used. The following general comments should also be kept in mind:

1.   Clinical and epidemiologic data are used as much as possible in ascertaining likely specific agents.

2.   Probabilities must be weighed; for example, congenital cytomegalovirus infection is by far the most frequent TORCH complex agent encountered in the United States (>90% of all proved cases).

3.   Potentially treatable infections must be considered first. If toxoplasmosis or herpes simplex is suggested by the historic and clinical findings, it may be controlled by prompt and aggressive therapy. Early identification and treatment of HIV-1 infections can significantly improve long-term prognosis in infants. Other infections, which are potentially preventable by early specific immunoglobulin therapy of the infant, in-clude maternal varicella and hepatitis B infections. The remaining agents involved in the TORCH array are not amenable to specific therapy at present. Their importance lies more in long-term prognosis, planning of continuing care, and epidemiologic management.

4.   Serologic testing, when indicated, should be performed on both infant and maternal sera collected at the same time to facilitate interpretation of specific antibody titer lev-els in the infant. This approach is based on the following principles: passive transpla-cental transmission of IgG antibodies occurs, but these maternal antibodies normally wane and disappear in the infant over 3 to 6 months. If the infant is actively infected, it usually produces its own specific antibodies to the agent, which then persist for much longer periods. Thus, a specific antibody titer in the infant’s serum during the first month of life equal to or less than that of the mother may merely reflect passive transfer and does not support a diagnosis of active infection. On the other hand, if the infant’s titer is significantly higher than the mother’s (fourfold or greater) or rises pro-gressively in serial samples obtained in later months, active infection by the agent in question is suggested.

In active congenital and neonatal infections, the infant’s early responses often include

IgM antibodies. Maternal IgM antibodies rarely cross the placental barrier, sospecific IgM antibody determinations early in life may be useful for the diagnosis ofcongenital toxoplasma, rubella, and cytomegalovirus infections. However, both falsepositiveand false-negative results have been noted. The presence of rheumatoid factorhas been a major cause of false-positive results. Tests with high specificity includesolid-phase IgM assays with antihuman IgM as a “capture” antibody and enzymelinkedantibody markers.

Nonspecific tests, such as quantitation of total IgM or IgA or detection of rheumatoid

factor, have limited or no usefulness. Negative results do not rule out infection,and positive results must be regarded cautiously.

5.     In fetal and neonatal infections, such as those caused by HIV, specific antibody testingis not usually helpful in establishing a diagnosis in the first 15 to 18 months of life.Tests for p24 antigenemia, blood culture, or polymerase chain reaction methods forviral nucleic acid detection are preferred and may need to be serially repeated if initiallynegative.