1. Parenchyma 2. Aerenchyma 3. Collenchyma 4. Sclerenchyma - Simple tissues, such as parenchyma, collenchyma and sclerenchyma, consist of a single cell type, though they may be interspersed with other, isolated, cell types (idioblasts).

Simple tissues, such as parenchyma, collenchyma and scleren-chyma, consist of a single cell type, though they may be interspersed with other, isolated, cell types (idioblasts). Complex tissues consist of multiple cell types, and can be divided into three main groups: dermal tissue (epidermis), ground tissue and vascular (conducting) tissue, each distributed throughout the plant body, and often continuous between the various organs. Complex tissues often include elements of several different simple tissue types; for example, secondary xylem includes not only vascular tissue, but also parenchyma and sclerenchyma.

Parenchyma cells are typically thin-walled and often polyhedral or otherwise variously shaped, sometimes lobed. Cells with living contents that do not fit readily into other categories are often termed parenchyma cells. They are the least specialized cells of the mature plant body and often resemble enlarged meristematic cells. Parenchyma cells may occur in primary or secondary tissues. Relatively specialized types of parenchyma include certain secretory tissues and chlorenchyma, which contains chloroplasts for photosynthesis. Parenchymatous cells may be tightly packed or may be interspersed with intercellular air spaces.

Callus tissue is a cellular proliferation that is often produced at the site of a wound by divisions in parenchyma cells that have retained the ability to divide at maturity. A single isolated callus cell can be used to artificially grow a new plant using tissue culture methods.

Aerenchyma is a specialized parenchymatous tissue that often occurs in aquatic plants (hydrophytes). It possesses a regular, well-developed system of large intercellular air spaces (Fig. 1.7) that facilitates internal diffusion of gases. In leaves, stems and roots of some water plants (e.g. Hydrocharis), aerenchyma is associated with a system of transverse septa or diaphragms that provide mechanical resistance to compression. These septa are uniseriate layers of parenchyma cells that are thicker-walled than neigh-bouring aerenchyma cells. 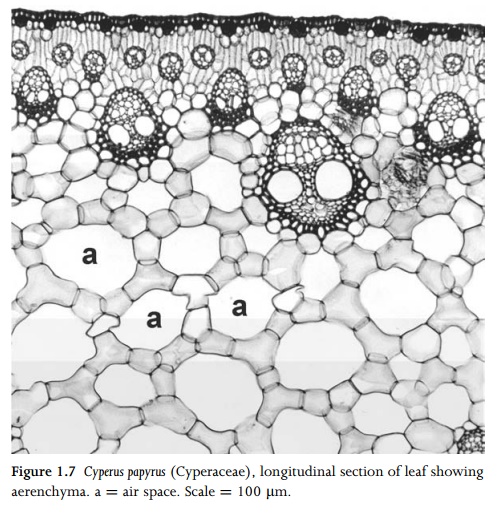 Collenchyma consists of groups of axially elongated, tightly-packed cells with unevenly thickened walls. This tissue has a strengthening function and often occurs in the angles of young stems, or in the midribs of leaves, normally in primary ground tissue. Collenchyma cells differ from fibres in that they often retain their contents at maturity and do not generally have lignified walls, though they may ultimately become lignified.

Sclerenchyma, also a supporting or protective tissue, consists of cells with thickened, often lignified, walls, which usually lack contents at maturity. Sclerenchyma cells occur in primary or secondary tissue, either in groups or individually as idioblasts interspersed in other tissue types. They are categorized as either fibres or sclereids, though transitional forms occur.

Fibres are long narrow cells that are elongated along the long axis of the organ concerned; they normally occur in groups. Bastfibres are extraxylary cortical fibres which can be of economic use, as in flax and hemp.

Sclereids are variously shaped and may occur throughout the plant33. Brachysclereids (stone cells) are isolated, approximately isodiametric cells dispersed among parenchyma cells; they develop thick secondary walls as the plant matures. Astrosclereids are highly branched cells with projections that grow intrusively into surrounding intercellular air spaces or along middle lamellae during the growth phase of the organ. Their shapes are to some extent dictated by the nature of the surrounding tissues; for example, they are often star-shaped (astrosclereids: Fig. 1.8) or bone-shaped (osteosclereids) 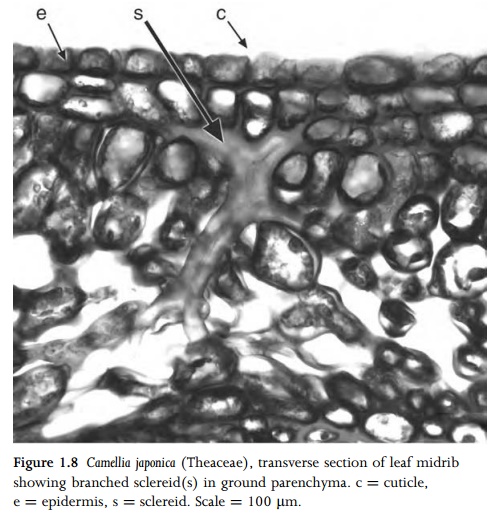