Plant cells typically have a cell wall containing a living protoplast (Fig. 1.3). The layer that contacts the walls of adjacent cells is termed the middle lamella.

Plant cells typically have a cell wall containing a living protoplast (Fig. 1.3). The layer that contacts the walls of adjacent cells is termed the middle lamella. Following cessation of growth, many cells develop a secondary cell wall which is deposited on the inside surface of the primary wall. Both primary and secondary walls consist of cellulose microfibrils embedded in a matrix and ori-ented in different directions. Secondary cell walls consist mostly of cellulose, but primary walls commonly contain a high proportion of hemicelluloses in the gel-like matrix, affording a greater degree of plasticity to the wall of the growing cell. The secondary wall can also contain deposits of lignin (in sclerenchymatous cells) or suberin (in many periderm cells), and often appears lamellated. 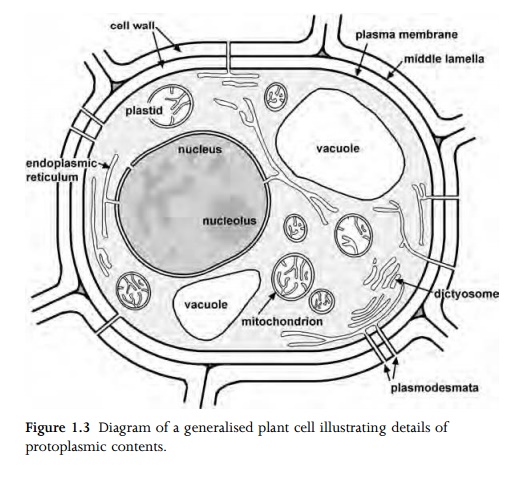 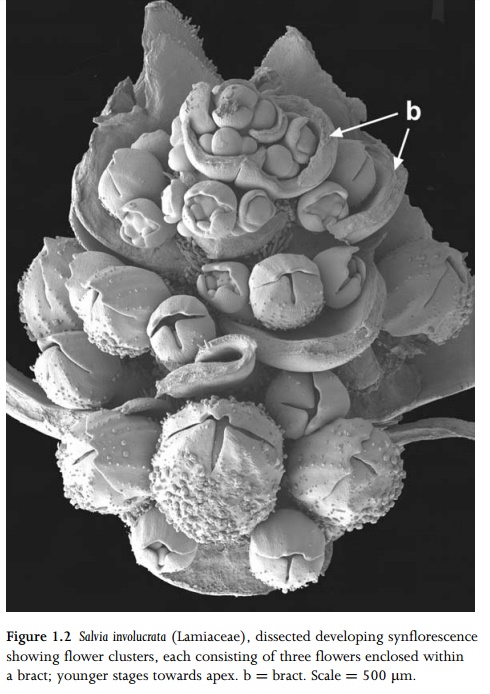 Thin areas of the primary wall, which usually correspond with thin areas of the walls of neighbouring cells, are primary pit fields, and usually have protoplasmic strands (plasmodesmata) passing through them, connecting the protoplasts of neighbouring cells. The connected living protoplasts are collectively termed the sym-plast. Primary pit fields often remain as thin areas of the wall even after a secondary wall has been deposited, and are then termed pits, or pit-pairs if there are two pits connecting adjacent cells. Pits may be simple, as in most parenchyma cells, or bordered, as in tracheary elements. In simple pits the pit cavity is of more or less uniform width, whereas in bordered pits the secondary wall arches over the pit cavity so that the opening to the cavity is rela-tively narrow. Through a light microscope the outer rim of the primary pit field appears as a border around the pit opening.

The cell protoplast is contained within a plasma membrane. It consists of cytoplasm that encloses bodies such as the nucleus, plastids and mitochondria, and also non-protoplasmic contents such as oil, starch or crystals. The nucleus, which is bounded by a nuclear membrane, often contains one or more recognizable bodies (nucleoli) together with the chromatin in the nuclear sap. During cell division the chromatin becomes organized into chromosomes. Most cells possess a single nucleus, but examples of multinucleate cells (coenocytes) include the non-articulated laticifers found in many plant families. Such cells elongate and penetrate established tissues by intrusive tip growth,in which the cell apices secrete enzymes that dissolve the middle lamellae of neighbouring cells; bifurcation occurs when they encounter an obstacle.

Mitochondria and plastids are surrounded by double mem-branes. Plastids are larger than mitochondria, and are classified into different types depending on their specialized role. For example, chloroplasts are plastids that contain chlorophyll within a system of lamellae that are stacked to form grana; this is the site of photosynthesis. Chloroplasts occur in all green cells, but are most abundant in the leaf mesophyll, which is the primary photosynthetic tissue. Membranes occur widely throughout the cytoplasm, sometimes bounding a series of cavities. For example, the endoplasmic reticulum is a continuous membrane-bound system of flattened sacs and tubules, sometimes coated with ribosomal particles. Dictyosomes are systems of sacs associated with secretory activity. Vacuoles are cavities in the cytoplasm; they are usually colourless and contain a watery fluid. Their size and shape varies in different cell types, and also changes during the life of a cell.