T lymphocytes, or T cells, are so designated because the thymus plays a key role in their differentiation.

T lymphocytes, or T cells, are so designated because the thymus plays a key role in their differentiation. They are the key play-ers in adaptive immunity. They participate directly in immune responses as well as in orchestrating and regulating activities of other cells.

·           They are found in the inner subcortical regions but not in the germinal centers of the lymph nodes.

·           Most human T cells have receptors for sheep erythrocytes on their surface and have the ability to form rosettes with them; this property is made use of for identifying T cells in a mixed population of cells.

Various effector functions: Effector functions are mediatedprimarily by cytotoxic (CD81) T cells, which kill allografts, tumor cells, and virus-infected cells. Depending on whether they have CD4 or CD8 proteins on their surface, T cells are subdivided into two major groups: CD41 T cells and CD81 T cells. Mature T cells have either CD4 or CD8 proteins, but never both.

CD4 cells are also known as helper T (Th) cells. They consti-tute about 65% of peripheral T cells and are found mainly in the thymic medulla, tonsils, and blood. CD4 displayed on the surfaces of these T cells recognize a nonpeptide-binding portion of MHC class II molecules. Hence, CD41 T cells are restricted to the recognition of pMHC class II complexes. Helper T lymphocytes are involved in the induction and reg-ulation of immune responses. CD41 T cells perform follow-ing helper functions: 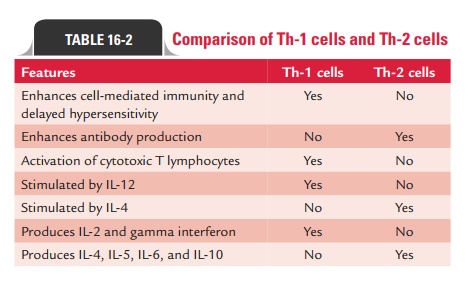 All these functions are mediated by Th-1 cells and Th-2 cells— the two subpopulations of CD41 T cells:

·           They help in the development of hypersensitivity responses by producing primarily IL-2 and gamma interferon.

CD81 T cells are also known as cytotoxic T (Tc) and suppres-sor T (Ts) cells. They account for approximately one-third of all mature CD31 cells. They are found mainly in the human bone marrow and gut lymphoid tissue.

CD81 T glycoprotein displayed on the surfaces of these T cells recognize a nonpeptide-binding portion of MHC class I molecules. Hence, CD81 T cells are restricted to the recognition of pMHC class I complexes.

(i)One pathway involves the release of proteins known as perforins, which insert themselves in the target cell membranes forming channels. These channels allow the diffusion of enzymes (granzymes, which are serine ester-ases) into the cytoplasm. The exact way in which gran-zymes induce apoptosis has not been established, but granzyme-induced apoptosis is Ca21-dependent.

(ii) The other pathway depends on signals delivered by the cytotoxic cell to the target cell, which require cell-to-cell contact. This pathway is Ca21 independent. 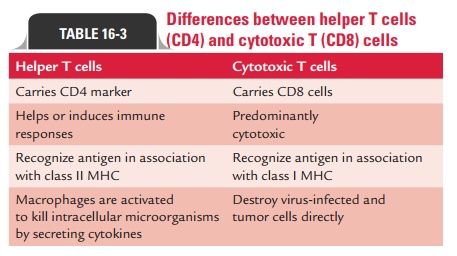 The ratio of CD41 and CD81 T cells is approximately 2:1 in normal human peripheral blood. This may be significantly altered in immunodeficiency diseases, autoimmune diseases, and other disorders. Differences between CD4 and CD8 T cells are summarized in Table 16-3.

Recognition of complex on the surface of APCs, such as mac-rophages and dendritic cells, consisting of both the antigen and a class II MHC protein by TCR present on T cells, is most important for activation of helper T cells. Two signals are required to activate T cells:

·           The interaction of the antigen and the MHC protein with the T-cell-receptor-specific antigen is the first signal required in the activation of process. IL-1 secreted by the macrophages is also necessary for efficient helper T-cell activation.

After activation of the T cells, a new different protein called CTLA-4 appears on the cell surface of T cells and binds to B7 by displacing CD28. The interaction of CTLA-4 with B7 inhibits T-cell activation by blocking IL-2 synthesis. This makes T cells to remain in a quiescent state and thereby plays an important role in T-cell homeostasis. On the other hand, mutant T cells that lack CTLA-4 and hence cannot be deactivated participate more frequently in autoimmune diseases.

Memory T cells, as the name suggests, confer host immunity with the ability to respond rapidly and vigorously for many years after the initial exposure to a microbe or other foreign substances. The memory produced against a specific antigen shows the following characteristics:

1.        Memory cells live for many years or have the capacity to reproduce them.

2.        A large number of memory cells are produced, and so secondary response is enhanced and is greater than the primary response.

3.        Memory cells are activated by small quantity of antigens and require less costimulation than do the naïve and unac-tivated T cells.

4.        Activated memory cells produce greater amounts of interleukins than do naïve T cells when they are first activated.

T- cell receptor (TCR) for antigen consists of two polypep-tides: alpha and beta. These two peptides are associated with CD3 proteins. Each T cell has a unique TCR on its surface, thereby implying that hundreds of millions of different T cells occur in each person. Activated T cells as well as activated B cells produce large number of cells specific for those antigens. T-cell alpha and beta polypeptides show many similarities to immunoglobulin heavy chain in the following ways:

·           The genes coding for T-cell polypeptides are formed by rearrangement of multiple regions of DNA.

·           RAG-1 and RAG-2 are the two genes that encode the recombinase enzymes that catalyze these gene rearrange-ments and are similar in T cells and B cells.

·           T cells, however, differ from immunoglobulins in the following ways:

·           T cells have two chains rather than four chains in immunoglobulins.

Effect of superantigens on T cells

Certain proteins such as staphylococcal enterotoxins and toxic shock syndrome toxins, and certain viral proteins, such as mouse mammary tumor virus, are called superantigens. These are called “super” because they activate a large number of helper T cells unlike “antigens”, which activate one or a few helper cells.

The superantigens play a very important role in patho-genesis of staphylococcal toxic shock syndrome caused by Staphylococcus aureus. In this condition, toxic shock syndrometoxin produced by S. aureus binds directly to class II MHC pro-teins without internal processing of the toxin. Subsequently, this toxin interacts with variable component of the beta chain (Vb) of the T-cell receptor of many T cells. The activation of T cells results in release of the interleukins, IL-2 from the T cells and tumor necrosis factor (TNF) from macrophages. These interleukins are responsible for many of the clinical presenta-tions observed in toxin-mediated staphylococcal diseases.

a)        By inserting perforins and granzymes (degrading enzymes) into the infected cell,

·    By inserting perforins and granzymes: Perforins are insertedinto the cells, leading to formation of a channel through the membrane. This results in the loss of cell contents and finally death of the cell. Granzymes are proteins that degrade proteins in the cell membrane, which also results in loss of cell contents. These enzymes also activate caspases that causes apoptosis, resulting in cell death.

The cytotoxic T cells also play an important role in graft rejec-tion. In this process, cytotoxic CD8 cells recognize the class I MHC molecules on the surface of the foreign cells. Helper CD4 cells recognize the foreign class II molecules on certain cells, such macrophages and lymphocytes in the graft. The activated helper cells secrete IL-2, which stimulates the cytotoxic cells to produce a clone of cells, which kills the cells in the allograft.

Th-1 cells produce IL-12-gamma interferon, which activates macrophages and thereby enhances the ability of the macro-phages to kill Mycobacterium tuberculosis. The gamma inter-feron, therefore, plays an important role in the ability of host immunity to control infections caused by M. tuberculosis, Listeriamonocytogenes, and other intracellular microbes. A deficiency ofCMI makes the person highly susceptible to infection by these microorganisms.

In the non-T-cell dependent response (T-cell-independent response), only IgM antibody is synthesized. This response does not produce any memory cells. Hence, a secondary antibody response does not occur. In this response, the multivalent macromolecules, such as bacterial capsule polysaccharide are not effectively processed and presented by APCs; hence these do not activate helper T cells. This is because polysaccharides do not bind to class II MHC pro-teins, whereas peptide antigens do.

2.   Stimulation of helper and cytotoxic T cells to partici-pate in the CMI: In CMI, the antigen is processed by mac-rophages and is presented in conjunction with class II MHC molecules on the surface. These interact with the receptor on the helper T cells, which is then activated to produce IL-2, a T-cell growth factor that stimulates the specific helper and cytotoxic T cells to grow and participate in the CMI.

3.   Suppression of certain immune responses: T cells havebeen shown to inhibit several immune-mediated diseases in animals. Regulatory T cells (TR), also called suppressor T cells, is a subset of T cells and are associated with the suppression of certain immune responses. TR cells also called suppressor T cells are characterized by possessing CD25 marker and comprise 5–10% of the CD41 cells. The exact mechanism by which the regulatory cells suppress the immune response is not known. Imbalance in numbers or activity between CD4 and CD8 cells also leads to impair-ment of the cellular immune response of the host.