The specific immune response to antigen is of two types: (a) humoral or antibody-mediated immunity, mediated by antibodies produced by plasma cells; and (b) cell-mediated immunity, mediated by sensitized lymphocytes. The immune system is organized into several special tissues, which are col-lectively termed lymphoid or immune tissues. The tissues that have evolved to a high degree of specificity of function are termed lymphoid organs.

Lymphoid organs include the gut-associated lymphoid tis-sues—tonsils, Peyer’s patches, and appendix—as well as aggre-gates of lymphoid tissue in the submucosal spaces of the respiratory and genitourinary tracts. The lymphoid organs, based on their function, are classified into central (primary) and peripheral (secondary) lymphoid organs.

Central or primary lymphoid organs are the major sites for lymphopoiesis. These organs have the ability to produce pro-genitor cells of the lymphocytic lineage. These are the organs in which precursor lymphocytes proliferate, develop, and differ-entiate from lymphoid stem cells to become immunologically competent cells. The primary lymphoid organs include thymus and bone marrow. In mammals, T cells mature in thymus and B cells in fetal liver and bone marrow. After acquiring immu-nological competency, the lymphocytes migrate to secondary lymphoid organs to induce appropriate immune response on exposure to antigens.

Thymus is the first lymphoid organ to develop. It reaches its maximal size at puberty and then atrophies, with a significant decrease in both cortical and medullary cells and an increase in the total fat content of the organ. The thymus is a flat, bilobed organ situated above the heart. Each lobe is surrounded by a capsule and is divided into lobules, which are separated from each other by strands of connective tissue called trabeculae. Each lobule is organized into two compartments: cortex and medulla. The stroma of the organ is composed of dendritic cells, epithelial cells, and macrophages (Fig. 16-1). 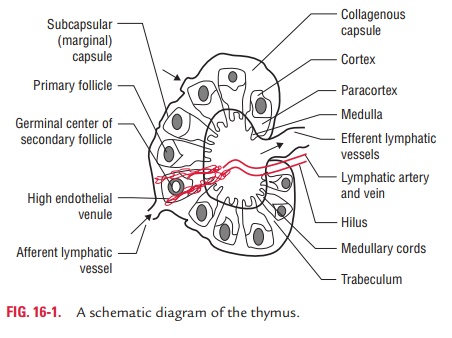 ·           Cortex: It consists mainly of (a) cortical thymocytes, theimmunologically immature T lymphocytes, and (b) a small number of macrophages and plasma cells. In addition, the cortex contains two subpopulations of epithelial cells, the epithelial nurse cells and the cortical epithelial cells, which form a network within the cortex.

·            Medulla: It contains predominantly mature T lymphocytesand has a larger epithelial cell-to-lymphocyte ratio than the cor-tex. The concentric rings of squamous epithelial cells known as Hassall’s corpuscles are found exclusively in the medulla.

Thymus is the site where a large diversity of T cells is produced and so they can recognize and act against a myr-iad number of antigen–MHCs (major histocompatibility complexes). The thymus induces the death of those T cells that cannot recognize antigen–MHCs. It also induces death of those T cells that react with self-antigen MHC and pose a danger of causing autoimmune disease. More than 95% of all thymocytes die by apoptosis in the thymus without ever reaching maturity.

Some lymphoid cells develop and mature within the bone mar-row and are referred to as B cells (B for bursa of Fabricius, or bone marrow). The function of bursa of Fabricius in birds is played by bone marrow in humans. Bone marrow is the site for prolifera-tion of stem cells and for the origin of pre-B cells and their matu-ration to become immunoglobulin-producing lymphocytes.

Peripheral or secondary lymphoid organs consist of (a) lymph nodes, (b) spleen, and (c) nonencapsulated structures, such as mucosa-associated lymphoid tissues (MALT). These organs serve as the sites for interaction of mature lymphocytes with antigens.

The lymph nodes are extremely numerous and disseminated all over the body. They play a very important and dynamic role in the initial or inductive states of the immune response. Lymph nodes measure 1–25 mm in diameter and are surrounded by a connective tissue capsule. The lymph node has two main parts: cortex and medulla. The reticulum or framework of the lymph node is composed of phagocytes and specialized types of reticular or dendritic cells (Color Photo 10).

Medulla: It is less densely populated and is composed mainlyof medullary cords. These cords are elongated branching bands of the lymphocytes, plasma cells, and macrophages. They drain into the hilar efferent lymphatic vessels. Plasma cells are also found in the medullary cords.

Following the period of division, there is a rigorous selection process in which more than 90% of these B cells die by apopto-sis or cell death. As antigen is carried into a regional node by the lymph, it is trapped, processed, and presented together with class II MHC molecules by interdigitating dendritic cells in the paracortex, resulting in the activation of TH cells. The initial activation of B cells is also thought to take place within the T-cell-rich paracortex. Once activated, TH and B cells form small foci consisting largely of pro-liferating B cells at the edges of the paracortex. Some B cells within the foci differentiate into plasma cells secreting IgM and IgG.

The spleen is the largest lymphoid organ. It is a large, ovoid sec-ondary lymphoid organ situated high in the left abdominal cavity. The spleen parenchyma is heterogeneous and is composed of the white and the red pulp. It is surrounded by a capsule made up of connective tissue (Color Photo 11). The spleen unlike the lymph nodes is not supplied by lymphatic vessels. Instead, blood-borne antigens and lymphocytes are carried into the spleen through the splenic artery. The narrow central arterioles, which are derived from the splenic artery after multiple branchings, are surrounded by lymphoid tissue (periarteriolar lymphatic sheath). In the white pulp, T lymphocytes are found in the lymphatic sheath imme-diately surrounding the arteriole. B lymphocytes are primarily found in perifollicular area, germinal center, and mantle layer, which lie more peripherally relative to the arterioles.

The effect of splenectomy on the immune response depends on the age at which the spleen is removed:

·           In adults, the adverse effects are less; although in some, it makes the host more susceptible to blood-borne bacterial infections.

Mucosa-associated lymphoid tissues (MALT) consist of the lymphoid tissues of the intestinal tract, genitourinary tract, tracheobronchial tree, and mammary glands. All of the MALT are noncapsulated and contain both T and B lymphocytes, and the latter predominate. Structurally, these tissues include clus-ters of lymphoid cells in the lamina propria of intestinal villi, tonsils, appendix, and Peyer’s patches.

Tonsils: These are present in the oropharynx and arepredominantly populated by B lymphocytes. These are the sites of intense antigenic stimulation, as shown by the presence of numerous secondary follicles with germinal centers in the ton-sillar crypts.

Peyer’s patches: These are lymphoid structures that arefound within the submucosal layer of the intestinal lining.

The follicles of the Peyer’s patches are extremely rich in B cells, which differentiate into IgA-producing plasma cells. Specialized epithelial cells, known as M cells, are found in abundance in the dome epithelia of Peyer’s patches, particu-larly at the ileum. These cells take up small particles, virus, bacteria, etc., and deliver them to submucosal macrophages, where the engulfed material is processed and presented to T and B lymphocytes.