The major histocompatibility complex (MHC) was first detected as the genetic locus encoding the glycoprotein molecules (transplantation antigens) responsible for the rapid rejection of tissue grafts transplanted between genetically nonidentical individuals. Gorer in 1930 was the first to identify the antigens responsible for allograft rejection that led to the discovery of major histocompatible complex. He demonstrated two blood group antigens (antigen 1 and anti-gen 2) in mice. Antigen 1 was found in all strains of mice, while antigen 2 was found in certain strains of mice and was responsible for allograft rejection. This was named H2 anti-gen and was found to be the major histocompatible antigen. This antigen was coded for by a closely linked multiallelic cluster of genes called the MHC, named as H-2 complex.

Histocompatible antigen denotes the cell surface antigens that induce immune responses to an incompatible host, result-ing in allograft rejection. The MHC in humans is known as human leukocyte antigens (HLA) complex. In humans, thesealloantigens are present on the surface of leukocytes and are called HLA and the set of genes encoding for them is named the HLA complex. Carbohydrate antigens of erythrocytes (blood groups) and glycoprotein antigens of cell membranes are the two major transplantation antigens of humans. Snell, Dauseset, and Benacerraf (1980) were awarded the Nobel Prize for their work on MHC and genetic control of immune responses. 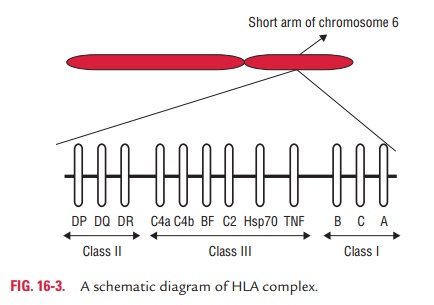 ·           Class III: Complement loci that encode for C2, C4, andfactor B of complement system and TNFs alpha and beta. 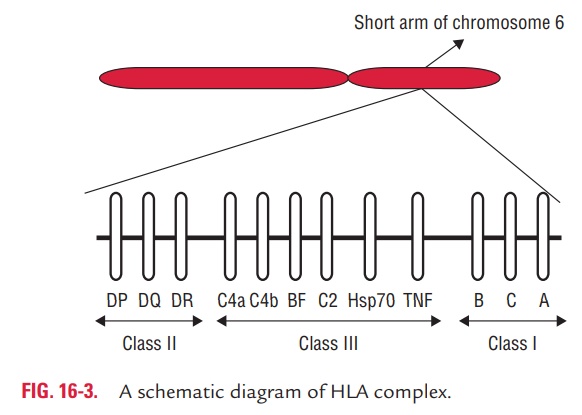 A locus means the position where a particular gene is located on the chromosome. HLA loci are usually multiallelic, mean-ing that genes present on the locus can be any one of several alternative forms. There are 24 alleles at HLA-A locus and 50 at HLA-B locus. Each allele expresses for a distinct antigen. HLA system is pleomorphic and every person inherits one set of HLA genes from each parent.

The official Committee of the WHO has recommended a set of guidelines for nomenclature of the HLA system. Recognized alleles and their corresponding antigens are indicated by alphabet(s) and a number (e.g., HLA-A1, HLA-DR7, etc.).

The HLA genes encode a variety of enzymes and structural molecules essential for the activation and function of B and T cells. The genes encode MHC proteins that are classified into three groups or classes known as the class I, class II, and class III molecules.

These are glycoproteins found on the surface of virtually all nucleated cells in the body. Class I proteins are encoded by the HLA-A, -B, and -C loci. Approximately 20 different proteins are encoded by allelic genes at the A locus, 40 at the B locus, and 8 at the C locus (Table 16-5). The complete class I is composed of a transmembrane glycoprotein of 45,000 Da, heavy chain, noncovalently associated with a b2-microglobulin (a non-HC-encoded polypeptide of MW 12,000 Da). The heavy chain like that of an immunoglobulin molecule has a variable and con-stant region. The variable region is highly pleomorphic. The polymorphism of these molecules is important in the recogni-tion of self and nonself. The constant region of the heavy chain binds with the CD8 proteins of the cytotoxic T cells. Class I pro-teins are involved in graft rejection and cell-mediated cytolysis.

These  are  glycoproteins  and  unlike  class  I  proteins,  they have  a  restricted  tissue  distribution.  They  are  chiefly  found on macrophages, B cells, and other APCs, such as dendritic cells of the spleen and Langerhans cells of the skin. Their expression on other cells (e.g., endothelial cells) can be induced by gamma interferon. They are highly polymorphic glycoproteins composed of two noncovalently associated transmembrane glycoproteins of MW of about 33,000 and 29,000 Da.

Class II proteins are encoded by the genes on the HLA-D locus. This locus retains control of immune responsive-ness, and different allelic forms of these genes confer striking differences in the ability to mount an immune response against a given antigen. The class II MHC locus also includes genes encoding proteins involved in antigen processing, e.g., transporter associated with antigen pro-cessing (TAP). Class II proteins are primarily responsible for the graft-versus-host response and the mixed leukocyte response.

The class III MHC locus encodes complement proteins (C2, C4) of the classical pathways, properdin and factor B of the alterna-tive pathway, and several cytokines.

It is now known that MHC molecules bind peptide antigens and present them to T cells. Thus, these transplantation anti-gens are responsible for antigen recognition by the TCR. In this respect, the TCR is different from antibody.

·           Antibody molecules interact with antigen directly; the TCR only recognizes antigen presented by MHC mol-ecules on another cell, the APC. The TCR is specific for antigen, but the antigen must be presented on a self-MHC molecule.

·           The TCR is also specific for the MHC molecule. If the anti-gen is presented by another allelic form of the MHC mol-ecule in vitro (usually in an experimental situation), there is no recognition by the TCR. This phenomenon is known as MHC restriction.

HLA typing or tissue typing are usually performed to determine the closest MCH match between the donors and recipients before performing transplantation surgery. The methods com-monly used in the laboratory include (a) molecular methods using DNA sequence, (b) serological assays, and (c) mixed lym-phocyte culture (MLC) techniques. All these methods are used to determine the haplotype, i.e., the class I and class II alleles on both chromosomes of both the donor and recipient.

DNA probe and PCR are highly specific and sensitive meth-ods used to detect the different alleles. Serological assays using a battery of antibodies specific for a different class I and class II proteins are also used to demonstrate the alleles. If these two methods fail to provide sufficient data, then additional infor-mation can be obtained by performing the MLC technique, also known as mixed lymphocyte reaction.

Mixed lymphocyte reaction: This test is performed byusing stimulator lymphocytes from a potential donor,which are first killed by irradiation. Then it is mixed with live responder lymphocytes from the recipient. The resultant mixture is then incubated in cell culture to allow DNA syn-thesis, which is detected by adding tritiated thymidine. The more the amount of DNA synthesis in the responder cells, the more foreign are the class II MHC protein of donor cells. Therefore, a large amount of DNA synthesis indicates that class II (HLA-D) MHC proteins of donor and recipients are not similar. This shows an unsatisfactory match between donor and recipients, thereby graft is likely to be rejected. Least production of DNA suggests the best donor and a good match between the donor and recipients. HLA typing is carried out: