In the aftermath of Second World War many colonial countries in Asia, Africa and Latin America got their independence from imperial rule.

In the aftermath of Second World War many colonial countries in Asia, Africa and Latin America got their independence from imperial rule. The newly independent countries were upset by the Cold War strategy of USA and USSR. They viewed power blocs as another form of imperialism and so decided to keep away from such politics. Calling themselves countries of Third World, a term coined by French demographer and historian Alfred Sauvy in 1952, they decided to follow an independent and neutral policy in their foreign affairs. 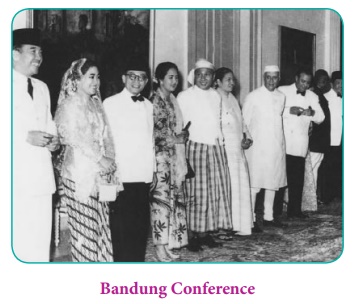 In 1955 the first Afro-Asian Conference was held at Bandung in Indonesia where 29 states, mostly new independent states, including Egypt, Indonesia, India, Iraq and the People’s Republic of China, gathered to condemn colonialism, apartheid and growing tensions due to Cold War. The conference adopted a 'Declaration on Promotion of World Peace and Cooperation' which included Nehru's Panchsheel and a collective pledge to remain neutral in the Cold War. The ten principles of Bandung later became the guiding principles of NAM. The term "non-alignment" was coined by V. K. Krishna Menon in 1953 at the United Nations.

Based on the Ten Principles of Bandung, the First Summit of NAM was held at Belgrade, the capital of Yugoslavia in 1961. Five members played a prominent role in the foundation of NAM: Jawaharlal Nehru of India, Sukarno of Indonesia, Gamal Abdel Nasser of Egypt, Kwame Nkrumah of Ghana and Josip Broz Tito of Yugoslavia. The objective of NAM was to "create an independent path in world politics. The most important objectives included ending of imperialism and colonialism, promotion of international peace and security and disarmament, ending of racism and racial discrimination.” The statement issued at the end of the Belgrade conference also deprecated military pacts with any great power or the permission for any super power to build a military base in its territories. 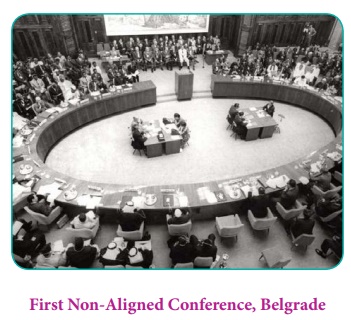 The following goals and objectives were set by the proponents of the Non-Aligned Movement at the 1955 Bandung Conference:

·              Respect of fundamental human rights and of the objectives and principles of the Charter of the United Nations.

·              Respect for the sovereignty and territorial integrity of all nations.

·              Non-intervention or non-interference in the internal affairs of another country.

·              Respect for the right of every nation to defend itself, either individually or collectively, in conformity with the Charter of the United Nations.

·              Non-use of collective defence pacts to benefit the specific interests of any of the great powers.

·              Refraining from acts or threats of aggression and use of force against the territorial integrity or political independence of any country. Non-use of pressures by any country against other countries.

·              Settlement of all international disputes by peaceful means, such as negotiation, conciliation, arbitration or judicial settlement as well as other peaceful means of the parties’ own choice, in conformity with the Charter of the United Nations.

During the Cold War period, NAM acted as an alternative for the power bloc politics. With the disintegration of Soviet Union, NAM became irrelevant.