Cold War and its Strategies

Between 1945 and 1991, the Cold War defined the foreign policy of the super powers.

On 16 April 1947 Bernard Baruch, the US Presidential adviser, in a speech at the State House in Columbia, used the term "Cold War," (earlier coined by George Orwell, the great English writer and author of Animal Farm), to describe the relations between the United States and the Soviet Union after the Second World War. A war without weapons, the Cold War was a war of ideologies.

Between 1945 and 1991, the Cold War defined the foreign policy of the super powers. During this period both the powers were in a constant state of military preparedness. The US wanted to promote open market for its goods and wanted to stop the spread of communism. On the other hand USSR wanted to spread communism and desired to have friendly governments on its borders who shared the same value systems. The powers adopted six major strategies to achieve their ends: Economic Aid, Military Pacts, Propaganda, Espionage, Brinkmanship, and Surrogate Wars.

In 1945 a civil war broke out in Greece. Britain which had supported Greece for years, now decided to withdraw given its own economic problems. Sometime later trouble started in Turkey also, with the communists trying to take control. In 1947, Britain told the United States that it could no longer afford to fight communist insurgencies in Greece and Turkey and decided to leave it as of March 31. United States chose to act. President Harry S. Truman decided to intervene in support of Greece and Turkey. He committed to provide financial and military assistance to those countries where communism was ascendant. This laid the framework for US policy towards containing communism, known popularly as the Truman Doctrine which dominated until the end of the Cold War. 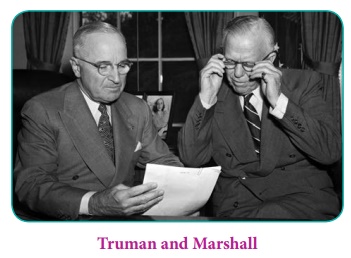 With its experience in Greece and Turkey, USA understood the value of American dollars in containing Communism. So it decided to move further in the same direction. In June 1947, George C. Marshall, the Secretary of State under President Truman, came out with an economic plan for all those European countries which were affected by war. He called it a European Recovery Programme. Marshall declared, "Our Policy is directed not against any country or doctrine but against hunger, poverty, desperation and chaos". European states were provided with financial assistance. Over the next four years 13,000 million dollars were pumped into western Europe in the name of Marshall plan. By 1948 sixteen European states and the three Western zones of Germany set up the Organisation for European Economic Cooperation (OEEC). Marshall Aid lasted for four years (1948–52). Molotov, the soviet foreign minister dubbed the Marshall Plan as "dollar imperialism".

In the Soviet view, Marshall Plan was little more than a ploy to spread American influence.

In response to Marshall Plan, USSR set up The Cominform (the Communist Information Bureau) in September 1947. This was an organisation in which all European communist parties were represented. It discouraged trade contact between the non-communist countries and tried to forge ideological and material linkages with its member countries. In 1949, USSR came out with its economic package known as Molotov Plan. Another organisation, known as Comecon (Council of Mutual Economic Assistance), was set up to co-ordinate the economic policies of USSR and its satellite states. 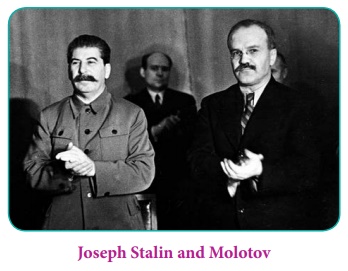 Forging strategic alliances by signing military pacts was another notable strategy used by both the powers to enlarge their camps. In 1948 Czechoslovakia was the only democratic state in Eastern Europe and was a buffer between the capitalist bloc and the Soviet Union. In the elections of May 1948 the Communist party swept the polls. This further alarmed the western powers.

Despite the friendship of the United States, Western European countries felt insecure. Communist victory in Czechoslovakia added to their fears.

The Western European countries were now willing to consider a collective security solution. The representatives of Great Britain, France, Belgium, the Netherlands and Luxembourg met in Brussels and signed a treaty in March 1948 which provided for military, political, economic and cultural collaboration. After sometime USA, Italy, Canada, Iceland, Denmark, Norway, Ireland and Portugal joined the five Brussels Treaty Powers resulting in the formation of NATO. Under NATO, all the member states agreed to regard an attack on any one of them as an attack on all of them and placed their defence forces under a joint NATO Command Organisation. This collective defence arrangement applied only to attacks that occurred in Europe or North America and did not include conflicts in colonial territories. In 1952, Greece and Turkey were admitted to NATO and West Germany joined in 1955. 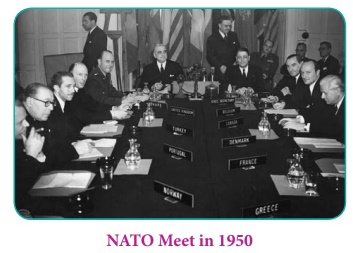 When West Germany became a member of NATO, USSR saw it as a direct threat and decided to make a counter arrangement. In May 1955, a “treaty of mutual friendship, co-operation and mutual assistance” was signed by Soviet Union and seven of its European allies. It was named as The Warsaw Pact, as the treaty was signed in Warsaw, the capital of Poland. The members were Soviet Union, Albania, Poland, Romania, Hungary, East Germany, Czechoslovakia, and Bulgaria. The treaty called upon member states to come to the defence of any member if it was attacked by an outside force. A unified military command under Marshall Ivan S. Konev of the Soviet Union was set up. The Warsaw Pact remained valid till 1991, the year of collapse of Soviet Union. 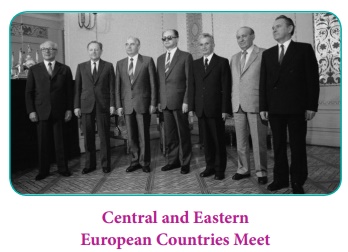 In 1949 China turned into a Communist state under the leadership of Mao. Communism was spreading from China to Korea. Alarmed by the spread of communism in the Asian region, in September 1951, a tripartite military alliance was signed between the US, Australia and New Zealand (known as the ANZUS treaty). In 1954 the US signed a Mutual Defence Treaty with Nationalist China (Taiwan), providing the latter with American support in the event of an attack or invasion by Communist China.

In September of 1954, USA, France, Great Britain, New Zealand, Australia, the Philippines, Thailand and Pakistan formed the Southeast Asia Treaty Organisation (SEATO). SEATO is seen as an Asian-Pacific version of NATO. Interestingly only two south-east Asian countries, the Philippines and Thailand, had taken up membership and the rest of the countries refused to be part of it. The alliance was headquartered at Bangkok.

SEATO existed only for consultation, leaving each individual nation to react individually to internal threats. SEATO was not as popular as NATO. With the end of Vietnam War, SEATO was disbanded in 1977. 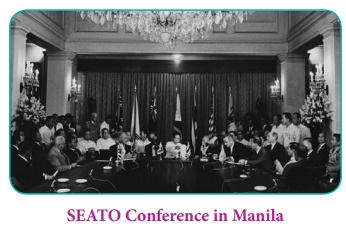 In February 1955, Iraq and Turkey signed a "pact of mutual cooperation" at Baghdad. The membership was open to all countries in the region. In April, Great Britain joined the Pact, followed by Pakistan and Iran. The aim was to check communist influence. A series of events took place in Middle East in 1958 which threatened regional stability: the Egypt–Syria union, revolution in Iraq and civil unrest in Lebanon. In response to these developments, the United States intervened in Lebanon. The members of the Baghdad Pact except for Iraq endorsed the US intervention. Iraq left the pact. As a result, the other signatories of the Baghdad Pact formed the Central Treaty Organisation (CENTO), moving its headquarters to Ankara, Turkey. United States continued to support the organisation as an associate, but not as a member. In 1979, the Iranian revolution led to the overthrow of the Shah and Iran withdrew from CENTO. Pakistan also withdrew that year after the organisation ceased to play an active role. CENTO was formally disbanded in 1979.

During the Cold War both the US and the USSR used propaganda as effective tools to glorify their ideology, while criticising the opponents values and ideals. Pro-American values were promoted in film, television, music, literature and art. While the ideology of capitalism was promoted, communism was condemned both as a political ideology and a social and economic system by the United States. In USSR propaganda was designed in such a way that collective work and collective leadership within the socialist frame were encouraged. Democracy and market economy was dubbed as a façade to mask an exploitative capitalism. 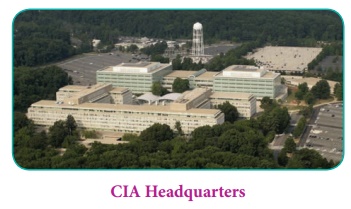 Espionage or spying was a key ploy used by the both super powers to get information on military secrets and access government records. During the Cold War both superpowers maintained strong intelligence-gathering agencies. In the United States the Central Intelligence Agency (CIA) was established in 1947 and the Soviet Union’s Komitet Gosudarstvennoy Bezopasnosti (KGB), or ‘Committee for National Security’ was formed in 1954. The espionage wars fuelled a great amount of suspicion and hatred, and a huge amount of popular films and novels with spies as heroes and villains added to it (e.g. James Bond films). 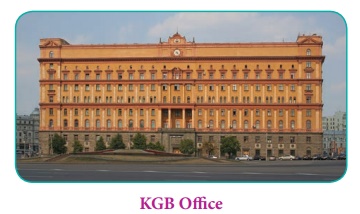 Brinkmanship was a term that was constantly used during the Cold War. The word comes from U.S. Secretary of State John Foster Dulles. In an interview to Life in 1956, he claimed that, in diplomacy, “if you are scared to go to the brink [of war], you are lost.” An example of this policy was in 1962 when the Soviet Union placed nuclear missiles in Cuba. This nearly brought about a nuclear war. The United States responded by putting a naval blockade around Cuba. Finally, after much negotiations, the missiles were removed from Cuba.

Brinkmanship is the practice of trying to achieve an advantageous outcome by pushing dangerous events to the brink of active conflict. It occurs in international politics, foreign policy, and military strategy and could involve even the threat of nuclear weapons. 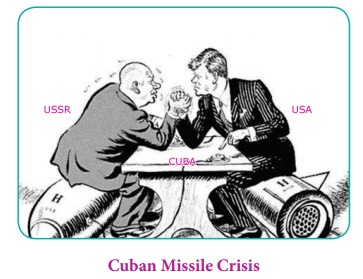 US and USSR engaged in surrogate or proxy wars as part of Cold War strategy. The Korean War of 1950–53 and the Vietnam Wars of 1955–75 were classic examples of the Cold War period. In both cases Soviet Union supported the communist government in North Korea and in North Vietnam and the United States supported South Korea and South Vietnam. These wars resulted in huge casualties and losses, and turned out to be civil wars as well. International opinion was mobilised in these wars, and anti-Vietnam protests made a profound impact on the politics, society and culture of the US and western Europe.