The Second World War was more catastrophic than the First World War. As many as 60 million civilians were killed.

The Second World War was more catastrophic than the First World War. As many as 60 million civilians were killed. In a planned genocide the Nazis killed 6 million European Jews. Millions became homeless and refugees. The War had destroyed factories and farm lands. Great cities such as Warsaw, Kiev, Tokyo and Berlin were totally devastated. Britain and France, which enjoyed prestige in international politics prior to the War, were badly undermined. The condition of post-war Europe appeared grave with shortages of food and raw materials. There was by high rates of unemployment.

The post-War material conditions challenged the laissez-faire attitude of capitalist countries. Many European countries turned into social welfare states committed to enhancing the conditions of its citizens. Not satisfied with the measures of the ruling governments the distressed masses tended to support socialist movements. This was especially so in Greece and Turkey where the communist movement was active. The USSR supported parties and movements which were left-leaning. By 1948 the Soviets had established left wing governments in the countries of eastern Europe notably in Romania, Bulgaria and Hungary. Elections held in Yugoslavia had already resulted in the formation of a communist state under Tito. As communism strengthened its grip on eastern Europe, the Americans and the British began to worry about the threat of Soviet-influenced parties coming to power in western Europe.

Emergence of a Bi-Polar World

Following the defeat of Germany, Stalin, Truman and Churchill, later replaced by Clement Attlee, met at Potsdam near Berlin in July 1945 to discuss the future of Germany. During the course of the meeting Truman informed Churchill about the invention of an atomic bomb. A few days after the conference, USA dropped atomic bombs over the Japanese cities of Hiroshima and Nagasaki. With the bombardment of Japanese cities, Japanese Emperor Hirohito announced his country's unconditional surrender. This act of bombing Japan without informing USSR created a diplomatic void between two countries. USSR produced an atomic bomb in 1949. 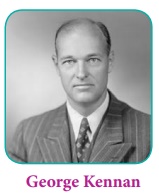 Meanwhile difference of opinion creation of the World Bank and the International Monetary Fund between the US and the USSR. On 22 February 1946 George Kennan, the American charge d’affaires in Moscow, in an 8,000- word telegram to the Department of State, known as ‘Long Telegram,’ emphasised that the Soviet Union did not see the possibility for long-term peaceful coexistence with the capitalist world and suggested that the best strategy was to “contain” communist expansion around the globe.

In March 1946 Churchill, who was invited to speak at Fulton in Missouri, condemned the Soviet action of installing communist governments in Eastern European region. He declared “From Stettin in the Baltic to Trieste in the Adriatic, an iron curtain has descended across the continent.” He called for a western alliance which would stand firm against communism. Churchill’s speech is considered to signal the beginning of the Cold War. Stalin criticised Churchill as a warmonger. After the Iron Curtain Speech of Churchill, USSR continued to tighten its hold over Eastern Europe. By the end of 1947 except Czechoslovakia the rest of the area was brought under Communist rule. 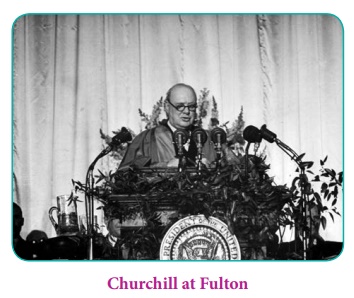 The Berlin Blockade and Formation of East Germany and West Germany

By the Yalta and Potsdam Conference agreements, Germany, with its capital city Berlin, was divided into four zones, viz., U.S zone, U.K. zone, French zone and USSR zone. By early 1948 all the three western zones were merged together and with the Marshall Plan these zones registered rapid growth and development. USSR’s response was to put pressure on communications between West Berlin and West Germany. In June 1948 the Russians stopped all road and rail traffic between West Berlin and West Germany. The western powers decided to maintain contact with Berlin by air. For nearly eleven months West Berlin was supplied by air, and vast quantities of supplies were flown in at immense cost. In May 1949 USSR ended its ban on land traffic and the crisis ended. The western powers now went ahead and set up the Federal Republic of Germany in August 1949 (FRG, popularly known as West Germany) and USSR set up the German Democratic Republic (GDR, popularly known as East Germany) in October 1949. If the division of Germany marked the real beginnings of the Cold War, the reunification of Germany in 1990 signalled the end of Cold War. 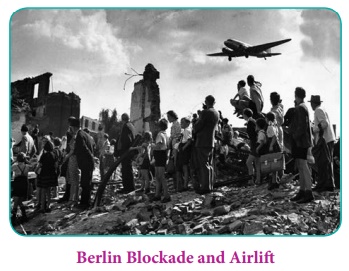