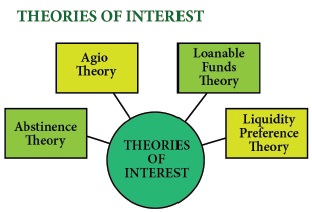 Marshall accepted the Abstinence Theory of interest. But he used the word ‘waiting’ instead of “abstinence”. Saving implies waiting. According to him, interest is the reward for waiting. Saving involves waiting. But people do not like to wait. So, in order to make them wait and in turn to save, we have to pay them some reward. Therefore, interest is the reward paid to the saver (capitalist) for his “waiting”.

According to this theory, saving involves suffering. But savings may not always involve suffering to some rich people. Rich people have money for which they do not get interest. Hoarding of money is to quench the thirst for liquidity.

This theory was propounded by John Rae in 1834. But credit goes to Bohm Bawerk an Austrian School economist who has given final shape to the theory. The American economist Irving Fisher modified and gave a new theory viz Time Preference theory.

According to this theory, people prefer present goods rather than future goods. Because the present goods are more certain than future goods, just “as a bird in the hand is worth two in the bush”. Ther are many countries where no one knows what will happen next day.ASEAN crisis of 1996 and American crisis of 2007-08 were not predicted even for economists, including Nobel Laureats. So, when people save they have to postpone their present enjoyment or satisfaction. If one postpones one’s present satisfaction, one has to be paid an “Agio” or “Premium”. This premium is “interest”. People prefer present consumption than future consumption due to the risk increasing and uncertainties of the present world.

The Loanable Funds Theory, also known as the “Neo–Classical Theory”, was developed by Swedish economists like Wicksell, Bertil Ohlin, Viner, Gunnar Myrdal and others.

The demand for loanable funds depends upon the following:

Demand for Investment (I)

The demand for loanable funds comes from individuals who borrow money for consumption purposes also.

The next demand for loanable funds comes from hoarders. Demand for hoarding money arises because of people’s preference for liquidity, idle cash balances and so on. The demand for C, I and H varies inversely with interest rate.

The supply of loanable funds depends upon the following four sources:

According to this theory, savings may be of two types, namely,

·           The unplanned savings are called, “ex-post savings”. Savings is left out after spending are ex post saving.

Dishoarding means bringing out the hoarded money into use and thus it constitutes a source of supply of loanable funds. In India,after 1991,Public sector undertakings are being sold to private people to mobilize more funds.This is also called disinvestment.

Disinvestment is the opposite of investment.Inotherwordsdisinvestment means not providing sufficient funds for depreciation of equipment. It gives rise to the supply of loanable funds.

All the four sources of supply of loanable funds vary directly with the interest rate.

The equilibrium interest rate, according to classical theory, is determined by the intersection of demand and supply curves, Demand for money refers to investment. Supply of money refers to savings S=I.

The rate of interest is determined by the equilibrium between the total demand for and the total supply of loanable funds.

Supply of and Demand for Loanable Funds 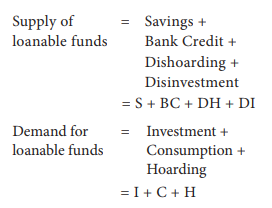 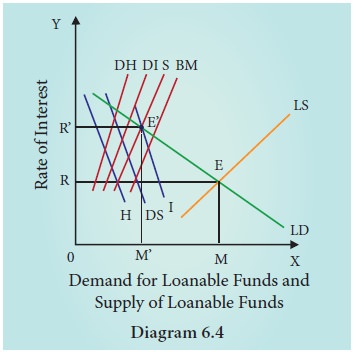 The LD curve represents the total demand for loanable funds; this is obtained by the summation of the demand for investment curve I, demand curve for consumption demand or dissaving curve and curve for demand for hoarding curve H. The LD and LS curves, intersect each other at the point “E” the equilibrium point. At this point, OR rate of interest and OM is the amount of loanable funds.

1. Many factors have been included in this theory.Still ther are many more factors.Two such factors are 1)Asymmetric Information and 2) Moral Hazard.In practice larger firms, due to their political powers, are able to get huge bank credit at lower interest rates.But due to NPAs, (Non-Performing Assets)small firms and depositors lose their interest income. The loanable funds theory is “indeterminate”’ unless the income level is already known. (This can be studied in 12th standard Economics)

2. It is very difficult to combine real factors like savings and investment with monetary factors like bank credit and liquidity preference.

Keynes propounded the Liquidity Preference Theory of Interest in his famous book, “The General Theory of Employment, Interest and Money” in 1936. 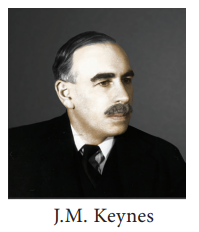 According to Keynes, interest is purely a monetary phenomenon because the rate of interest is calculated in terms of money. To him, “interest is the reward for parting with liquidity for a specified period of time”.

Liquidity preference means the preference of the people to hold wealth in the form of liquid cash rather than in other non-liquid assets like bonds, securities, bills of exchange, land, building, gold etc.

“Liquidity Preference is the preference to have an amount of cash rather than of claims against others”.

Motives of Demand for Money

According to  Keynes,  there are three motives for liquidity preference. They are: 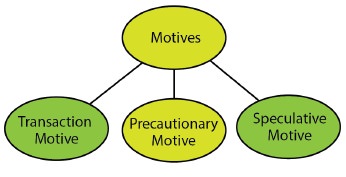 The transaction motive relates to the desire of the people to hold cash for the current transactions (or day–to-day expenses).

The amount saved under this motive depends on the level of income. Mt and Y are positively associated. (Say Mt = 0.125Y; that means if income is  Rs. 1000, demand for transaction motive is  Rs. 125)

The precautionary motive relates to the desire of the people to hold cash to meet unexpected or unforeseen expenditures such as sickness, accidents, fire and theft. The amount saved for this motive also depends on the level of income. (Say Mp = 0.125Y; it means if income is  Rs. 1000, demand for Mp is  Rs. 125)

The speculative motive relates to the desire of the people to hold cash in order to take advantage of market movements regarding the future changes in the price of bonds and securities in the capital market. The amount saved for this motive depends on the rate of interest. Ms = f (i). There is inverse relation between liquidity preference and rate of interest (Say Ms = 450-100i).

Determination of Rate of Interest

Equilibrium between Demand and Supply of Money

The equilibrium between liquiditypreference and demand for money determine the rate of interest. In short -run, the supply of money is assumed to be constant ( Rs. 200).

LP is the liquidity preference Curve (demand curve). M2 M2 shows the supply curve of money to satisfy speculative motive. Both curves intersect at the point E, which is the equilibrium point. Hence, the rate of interest is 2.5. If liquidity preference increases from LP to L1P1 the supply of money remains constant, the rate of interest would increase from OI to OI1. Numerical examples given above can also be used for better understanding. Total demand for money=Mt+Mp+Ms =0.125Y+0.125Y+(450- 100i). 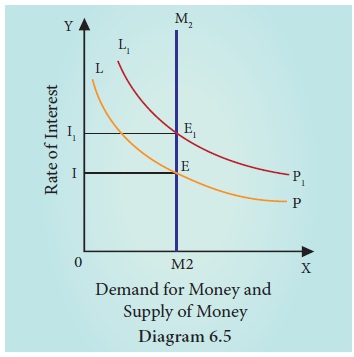 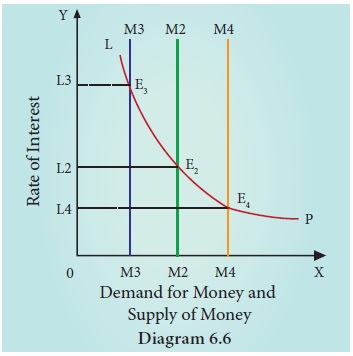 This theory does not explain the existence of different interest rates prevailing in the market at the same time.

It explains interest rate only in the short-run.