The world distribution of minerals

The world distribution of minerals

The minerals which contain metal in them are called as metallic minerals.

It is the basic mineral and the backbone of industrial development of the world. Iron Ore is the most widely distributed element of the earth’s crust and it rarely occurs in a free state. It is found as the composition of many rocks and minerals. Iron -ore makes up 4.6% of the earth crusts. Iron is found in the form of Iron - ore. They are classified into 4 categories.

i. Magnetite: It is red in colour and has 72% of pure Iron

ii. Hematite: It is black in colour and has 70% of pure Iron

iii. Limonite: Its colour varies from dark brown to yellow and has 50% of pure iron.

iv. Siderite: It is brown in colour and contains only 30% of pure iron is present.

The iron content of these ores is highly variable. If the iron content is less than 30% in an ore, it is considered to be uneconomical. Iron is mixed with fixed proportions of Manganese, Nickel, Chromium or Vanadium to make different varieties of steel.

Australia is the largest producer of Iron ore in the world. Other leading producers are China, Brazil, India and Russia. The Majority of Iron ore is (84%) produced by 5 countries alone. 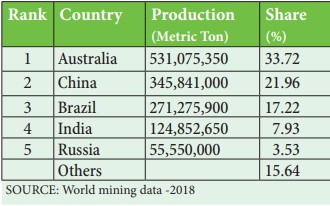 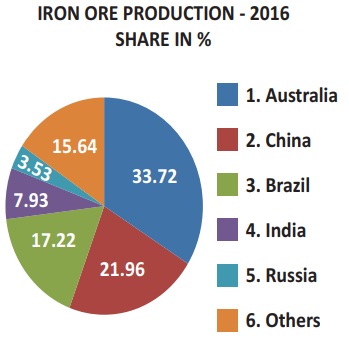 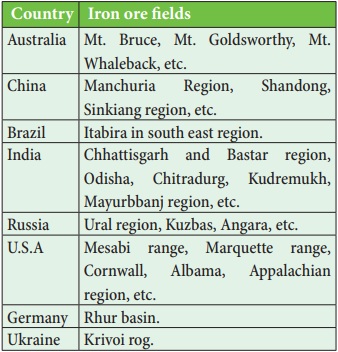 It is a kind of Ferro-alloy used to manufacture the special quality steel. A little manganese added to iron, removes gases and acts as a ‘Cleanser’ in the manufacturing process. Nearly 6 Kg of manganese is used for making one ton of steel.

Manganese is used for special quality steel making; it makes steel anti - corrosive, hard and clean. It helps to increase toughness, strength and durability to resist oxidation in blast furnaces. It is used to produce alloys with Copper, Bronze, and Nickel. It is used for producing heavy machinery, tools, bleaching powder, insecticides and paints.

Distribution and production of Manganese ore 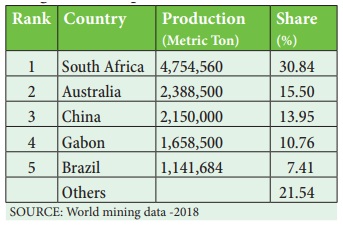 It is a non - ferrous, soft brown metal. It is a good conductor, with high luster, density and melting point. Copper occurs in three forms as native metal in its pure state, as oxides and as sulphide.

The chief ore of copper is copper pyrite. It yields nearly 76% of the world production of copper. Copper is extracted by the process of crushing, concentration, roasting, smelting and refining. It was discovered in the earliest stage of civilization. Copper is one of the first metals known and used by man. It is found in the igneous and metamorphic rocks. Copper is very soft, but by mixing with tin, bronze can be obtained and mixing with zinc, brass can be obtained which is harder and tougher than pure copper. Copper is used in

iii. Making of alloys and making tubes, pipes, pumps, radiators and boilers. They are also used in the production of a wide range of ornamental materials.

Production and distribution of Copper

Copper deposits are found in almost every country. The main producers are Chile, Peru, China, USA and Congo. Chile is the largest producer of Copper in the world. It produces 27.20% of the world Copper, followed by Peru, which produces 11.53%. India holds 35th rank and it produces only 0.15% of the world’s production. 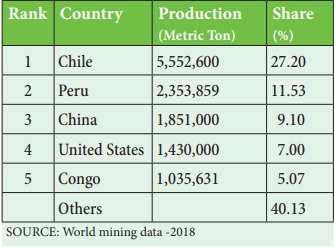 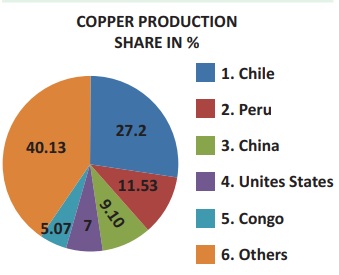 Bauxite is an important ore which is the main source of Aluminum. It is an impure raw material. It generally occurs as an ingredient of chemical compounds in highly complex minerals such as Cryolite, Corundum and Kaolin. Bauxite occurs quite near the surface and is generally mined by open cast method. It has a wide range of applications which include construction of buildings, utensils and airplane parts.

Production and world distribution of Bauxite 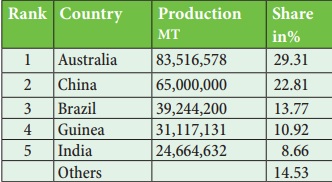 Gold is a precious metal which occurs in alluvial or placer deposits or as reefs or lodes in the underground. Gold is used extensively for jewellery and also in dentistry, glass and porcelain dyes, in medicines and other industries. The purity of gold is expressed in terms of carat. China, Australia, Russia, USA and Canada are the leading producers of gold in the world. I 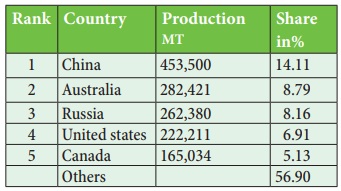 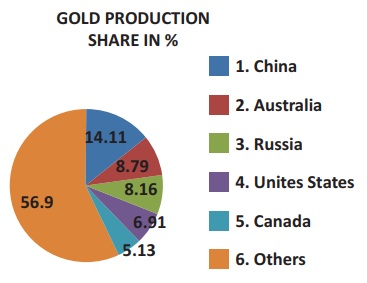 Fool’s Gold refers to pyrite of Iron Sulphide because of its similarity in shape and colour to actual gold.

Platinum is a rare metal. It is costlier than gold. It has a very high melting point. It is a heavy, malleable, ductile, highly inactive, silverish, white transaction metal. It is one of the densest metal almost twice as dense as lead. Platinum is found with other rare metals such as osmium, Palladium, Iridium and rhodium. Platinum is also used in industrial applications. South Africa is the largest producer of platinum in the world. The other leading producers are Russia, Zimbabwe, Canada and USA. 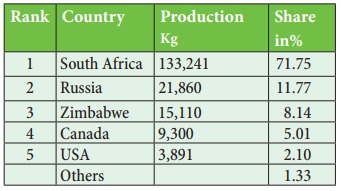 The minerals which do not contain metal in them are called as non metallic minerals.

Mica is a Latin word micare means to shine, to flash or to glitter. Mica has a crystalline and layered structure and can be split into very thin sheets. It does not react to water, acids, oil or solvents. It is lightweight, flexible and strong. It can resist extremely high temperatures or sudden changes in temperature and is able to withstand high voltages and insulate with low power loss. It can absorb or reflect light, which enables a decorative effect and protects against ultra-violet (UV) light.

Mica has several applications. There are several main sectors where the use of mica is identified. They are the paint and coatings sector, Cosmetics and personal care companies, Plastics and printing ink manufactures, the electronics sector, the automotive sector, the construction industry and the oil industry. 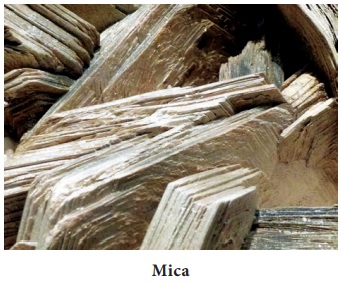 Phosphate occurs in the sedimentary rocks or as phosphate nodules. Another source is bird dropping of Guano. It is the most important source of phosphorus. It is mainly used in fertilizer. China is the largest producer of Phosphate in the world. The other leading producers are Morocco, USA, Russia and Peru. The Guano deposits are found in Peruvian and Chilean deserts in South America. India is the 20thlargest producer of Phosphate in the world. 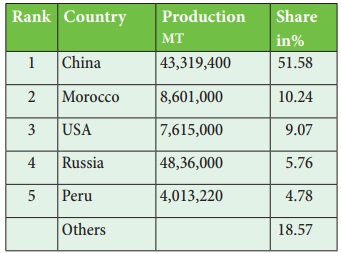 Agencies involved in the exploration of minerals in India. GSI, ONGC, MECL, NMDC, IMB, BGML, HCL, NALCO are the departments involved in mining in different states of India.