Energy gives motion to our industrial machines and vehicles. It is the primary input in the production of goods and services. The wheel of progress moves with the flow of energy. The energy resources may be classified into two types.

i. Non renewable sources of Energy

Once these resources are used, they cannot be regained again. In other words, they are exhaustible. They are coal, Petroleum natural gas and atomic fuels. 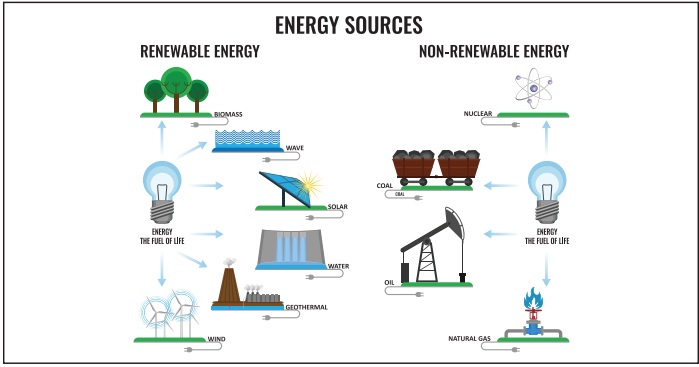 Coal is a fossil fuel. It is a flammable, black or brown sedimentary rock and is mainly composed of carbon. The dense forest plants were converted into coal due to intense pressure and heat inside the earth by the process of carbonization. Most of the coal resources of the world were formed during the carboniferous period (280 to 350 million years ago). The quality of the coal is determined by its carbon content. The following types of coal have been identified on the basis of their physical properties. They are,

i. Peat is the first stage of transformation of wood into coal and it has only 30% to 35% of carbon.

ii. Lignite or Brown coal is the inferior quality and contains 35%-45% carbon

iv. Anthracite is the best quality coal, which contains more than 95% of carbon. It is very hard but emits very less smoke and leaves very less ash. However its deposits are limited.

Production and world distribution of Coal 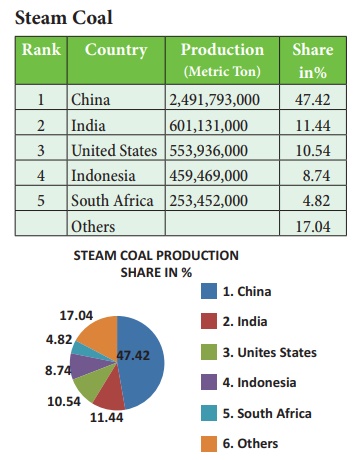 Why is hydrogen used as fuel in rockets?

China was the largest producer of coking coal in the world in 2016 followed by Australia. The other leading producers of coking coal are Russia, India and USA. 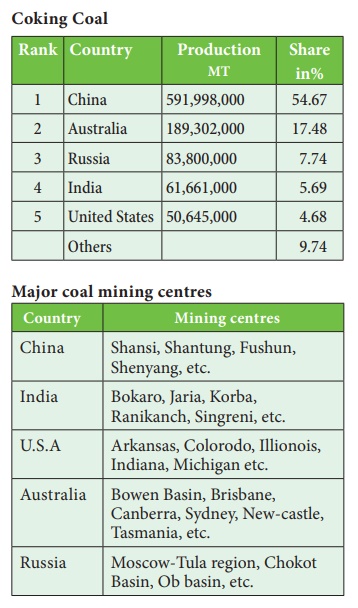 The main exporters of coal in the world are Australia, Indonesia, Russia, Colombia and South Africa and the main importers are China, India, Japan, Korea and Germany.

Man has used coal for hundreds of years. But it has gained importance only after industrial revolution. It contributes about 25% of global energy demand. Coal is used for various purposes. It is used as a source of steam energy, electrical energy, domestic fuel, metallurgical coke, chemical industries and byproducts such as Ammonium sulphate, Naphthalene, Phenol, Benzene, etc.

Petroleum is a mineral that exists under the surface of the earth in liquid, solid and gaseous forms. Liquid petroleum may be in the form of crude oil. The solid form may be mineral waxes or asphalts. The gaseous form is natural gas. It is a main source of energy in the World due to its multiple uses. The human activities are directly or indirectly depend on the use of petroleum or its sub products.

Formation and occurrence of mineral oil

It is formed by residual chemical and bio chemical decomposition of the remains of organic matter in sedimentary rocks. It is found in the pores of the sedimentary rocks. Oil is lighter than water hence, floats over water. Drilling of oil wells is the hole drilled in the earth’s crust and when it reaches the rock cap, the natural gas comes out first with a great pressure. When the pressure of gas subsides, petroleum starts flowing out when the pressure of natural gas is released.

Petroleum reserves of the world

Production and world distribution of petroleum

The petroleum producing countries of the world can be grouped in to five geographical regions: 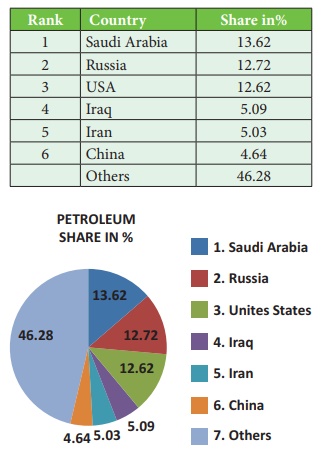 The world leading exporters of petroleum are Saudi Arabia, Russia, Iraq, UAE and Canada and the main importers are USA, China, India, Japan and Korea.

OPEC is the short form of the “Organisation of Petroleum Exporting Countries. It was formed in 1960 at Bagdad convention. Initially it comprised of Saudi Arabia, Iran, Iraq, Kuwait and Venezuela. Later on added in eight countries Libya, Algeria, Qatar, UAE, Nigeria, Ecuador and Angola, Indonesia left from OPEC in recently. 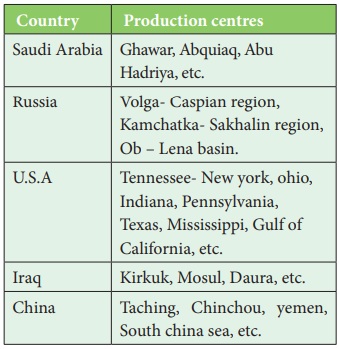 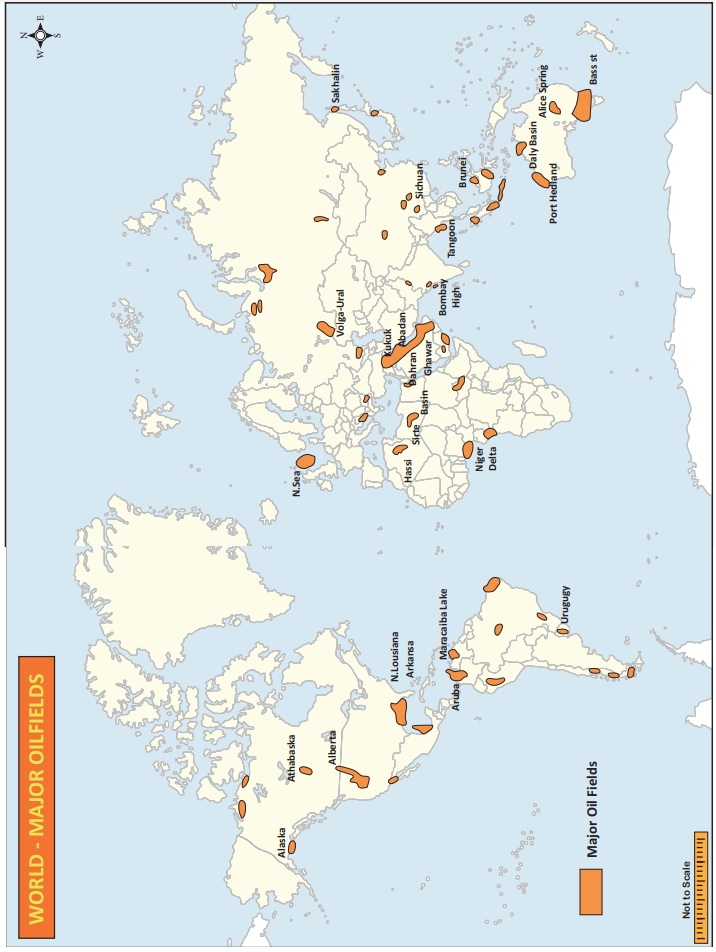 It is the cheapest source of energy. It is found along with or without petroleum. It is considered as an environment friendly fuel because of its low carbon dioxide emissions. Therefore, this is the only fuel for the present century and it is also called green energy. A powerful odorant, ethanethiol is added, so that leaks can be detected easily. It is prepared by refining petroleum or wet natural gas. 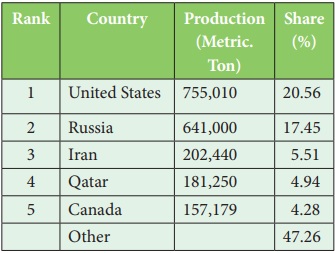 It is commonly said, this energy holds the key of future. Energy contained within the nucleus of an atom is called nuclear energy. Heavy metals like Uranium, Thorium, Radium, Plutonium and Lithium are the main sources of nuclear energy. However Uranium is the most important source of nuclear energy. The nuclear energy production was started first in USA in 1950. Nuclear energy now provides about 11% of the World’s electricity. At present there are more than 450 operable fission reactors in the world. The world’s first commercial nuclear power station Calder Hall at Wind scale, England was opened in 1956. 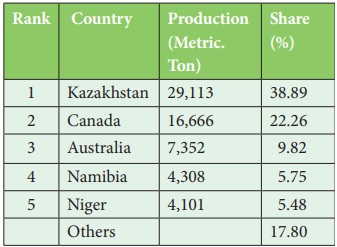 All regions of the world are facing the twin problems of fast increasing demand for energy and limited supplies and rapidly depleting conventional sources of energy. Under these circumstances, non conventional sources of energy are getting more importance. These sources are renewable, clean and non-polluting. They are solar, wind, geothermal, wave, tidal energy, bio-gas etc.

Hydro electricity is produced by using the potential energy of water falling from a certain height. The falling water spins the turbine blades and energy is produced. It is a clean eco friendly and renewable source of energy. It contributes nearly 7% of the world electricity production. China has the largest potential followed by Brazil, Indonesia, Canada and Zaire. China is the largest producer of Hydro electricity in the world, followed by Canada.

It is based on mechanical conversion of solar energy into electricity. It is available in abundance but only in the recent period it gets more importance due to technological development. Solar energy is used for various purposes. 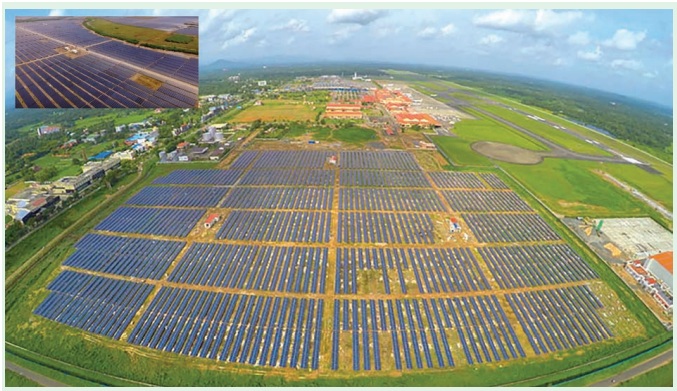 Kamuthi Solar Power Project is a photovoltaic power station spread over an area of 2,500 acres (10 km2) in Kamuthi, Ramanathapuram district. The project was commissioned by Adani Power. With a generating capacity of 648 MW at a single location, The Kamuthi Solar Power Project was completed on 21 September 2016. Around 8,500 workers installed an average of 11 MW of capacity per day to complete the project within 8 months. The entire solar park is connected to a 400 kV substation of the Tamil Nadu Transmission Corp. The solar panels are cleaned daily by a self-charged robotic system.

USA is the major producer of solar cells at present. It is simply the energy provided by the sun, which makes production of solar electricity possible. Solar power in India is a fast developing industry. The country's solar installed capacity reached 26 GW as of 30 September 2018. India expanded its solar-generation capacity 8 times from 2,650 MW on 26 May 2014 to over 20 GW as on 31 January 2018. The country added 3 GW of solar capacity in 2015-2016, 5 GW in 2016-2017 and over 10 GW in 2017-2018, with the average current price of solar electricity dropping to 18% below the average price of its coal-fired counterpart.

The wind is a clean, free and readily available renewable energy source. Wind turbines are capturing the wind’s power and converting it to electricity. Wind power has become a pillar in their strategies to phase out fossil and nuclear energy. Wind energy is now the second fastest growing source of electricity in the world. It fulfils about 5% of world’s electricity demand. The world’s largest wind farm is in Altamont pass in California. India is emerging as a major wind power producer of world. The important wind farms in India - (i).The largest wind farms in India are Muppandal in Kanyakumari District of Tamil Nadu and Jaisalmer wind park in Rajasthan. They are the first and second largest wind farms of India. Based on the location of its generation it is classified into

India’s first attempt to harness tidal power for generating electricity would be in the form of a 3MW plant at the Durgaduani creek in sunderbans delta of West Bengal. The Gulf of Kutch and Cambay in Gujarat and the Ganges delta in sunderbans, the world’s largest mangrove, are the 3 sites identified as potential areas for tidal power generation in India.

Geo thermal energy is derived from the natural heat of the earth. The United States is the world's largest producer, and the largest geothermal development in the world is The Geysers north of San Francisco in California, the U.S.

In India, exploration and study of geothermal fields started in 1970. The GSI (Geological Survey of India) has identified 350 geothermal energy locations in the country. The most promising of these is in Puga valley of Ladakh. The estimated potential for geothermal energy in India is about 10000 MW. There are seven geothermal provinces in India: the Himalayas, Sohana, West coast, Cambay, Son-Narmada-Tapti (SONATA), Godavari, and Mahanadi.