The Structure of a Compiler

The Structure of a Compiler

Up to this point we have treated a compiler as a single box that maps a source program into a semantically equivalent target program. If we open up this box a little, we see that there are two parts to this mapping: analysis and synthesis.

If we examine the compilation process in more detail, we see that it operates as a sequence of phases, each of which transforms one representation of the source program to another. A typical decomposition of a compiler into phases is shown in Fig. 1.6. In practice, several phases may be grouped together, and the intermediate representations between the grouped phases need not be constructed explicitly. The symbol table, which stores information about the 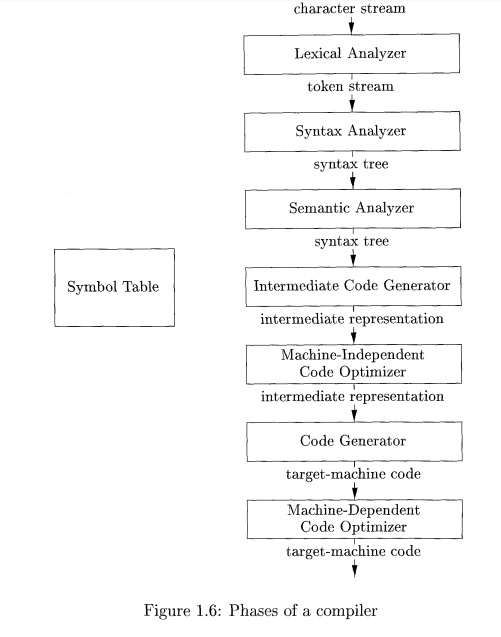 entire source program, is used by all phases of the compiler.

that it passes on to the subsequent phase, syntax analysis. In the token, the first component token-name is an abstract symbol that is used during syntax analysis,  and the  second component  attribute-value points  to  an  entry in  the symbol table for this token.  Information from the symbol-table entry Is needed for semantic analysis and code generation.

For example, suppose a source program contains the assignment statement

2. The assignment symbol = is a lexeme that is mapped into the token (=) . Since this token needs no attribute-value, we have omitted the second component. We could have used any abstract symbol such as assign for the token-name, but for notational convenience we have chosen to use the lexeme itself as the name of the abstract symbol.

3. initial is a lexeme that is mapped into the token (id, 2), where 2 points to the symbol-table entry for initial .

5. rate is a lexeme that is mapped into the token (id, 3), where 3 points to the symbol-table entry for rate .

Blanks separating the lexemes would be discarded by the lexical analyzer.

Figure 1.7 shows the representation of the assignment statement (1.1) after

lexical analysis as the sequence of tokens 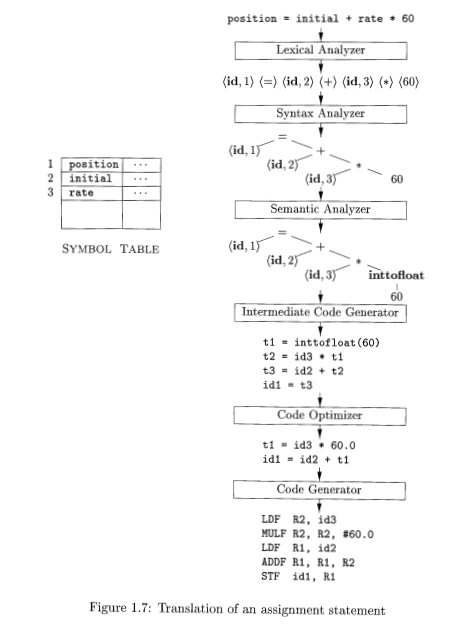 The second phase of the compiler is syntax analysis or parsing. The parser uses the first components of the tokens produced by the lexical analyzer to create a tree-like intermediate representation that depicts the grammatical structure of the token stream. A typical representation is a syntax tree in which each interior node represents an operation and the children of the node represent the arguments of the operation. A syntax tree for the token stream (1.2) is shown as the output of the syntactic analyzer in Fig. 1.7.

are to be performed. The tree has an interior node labeled * with (id, 3) as its left child and the integer 60 as its right child. The node (id, 3) represents the identifier rate . The node labeled * makes it explicit that we must first multiply the value of r a t e by 60. The node labeled + indicates that we must add the result of this multiplication to the value of initial . The root of the tree, labeled =, indicates that we must store the result of this addition into the location for the identifier p o s i t i o n . This ordering of operations is consistent with the usual conventions of arithmetic which tell us that multiplication has higher precedence than addition, and hence that the multiplication is to be performed before the addition.

The subsequent phases of the compiler use the grammatical structure to help analyze the source program and generate the target program. In Chapter 4 we shall use context-free grammars to specify the grammatical structure of programming languages and discuss algorithms for constructing efficient syntax analyzers automatically from certain classes of grammars. In Chapters 2 and 5 we shall see that syntax-directed definitions can help specify the translation of programming language constructs.

An important part of semantic analysis is type checking, where the compiler checks that each operator has matching operands. For example, many program-ming language definitions require an array index to be an integer; the compiler must report an error if a floating-point number is used to index an array.

After syntax and semantic analysis of the source program, many compil-ers generate an explicit low-level or machine-like intermediate representation, which we can think of as a program for an abstract machine. This intermedi-ate representation should have two important properties: it should be easy to produce and it should be easy to translate into the target machine.

In Chapter 6, we cover the principal intermediate representations used in compilers. Chapters 5 introduces techniques for syntax-directed translation that are applied in Chapter 6 to type checking and intermediate-code generation for typical programming language constructs such as expressions, flow-of-control constructs, and procedure calls.

The machine-independent code-optimization phase attempts to improve the intermediate code so that better target code will result. Usually better means faster, but other objectives may be desired, such as shorter code, or target code that consumes less power. For example, a straightforward algorithm generates the intermediate code (1.3), using an instruction for each operator in the tree representation that comes from the semantic analyzer.

A simple intermediate code generation algorithm followed by code optimiza-tion is a reasonable way to generate good target code. The optimizer can deduce that the conversion of 60 from integer to floating point can be done once and for all at compile time, so the inttofloat operation can be eliminated by replacing the integer 60 by the floating-point number 60.0. Moreover, t3 is used only once to transmit its value to i d l so the optimizer can transform (1.3) into the shorter sequence

There is a great variation in the amount of code optimization different com-pilers perform. In those that do the most, the so-called "optimizing compilers," a significant amount of time is spent on this phase. There are simple opti-mizations that significantly improve the running time of the target program without slowing down compilation too much. The chapters from 8 on discuss machine-independent and machine-dependent optimizations in detail.

The code generator takes as input an intermediate representation of the source program and maps it into the target language. If the target language is machine code, registers Or memory locations are selected for each of the variables used by the program. Then, the intermediate instructions are translated into sequences of machine instructions that perform the same task. A crucial aspect of code generation is the judicious assignment of registers to hold variables.

For example, using registers Rl and R2, the intermediate code in (1.4) might get translated into the machine code

The first operand of each instruction specifies a destination. The F in each instruction tells us that it deals with floating-point numbers. The code in (1.5) loads the contents of address id3 into register R2, then multiplies it with floating-point constant 60.0. The # signifies that 60.0 is to be treated as an immediate constant. The third instruction moves id2 into register Rl and the fourth adds to it the value previously computed in register R2. Finally, the value in register Rl is stored into the address of i d l , so the code correctly implements the assignment statement (1.1). Chapter 8 covers code generation.

This discussion of code generation has ignored the important issue of stor-age allocation for the identifiers in the source program. As we shall see in Chapter 7, the organization of storage at run-time depends on the language be-ing compiled. Storage-allocation decisions are made either during intermediate code generation or during code generation.

An essential function of a compiler is to record the variable names used in the source program and collect information about various attributes of each name. These attributes may provide information about the storage allocated for a name, its type, its scope (where in the program its value may be used),  and in the case of procedure names, such things  as the number and types of its arguments, the method of passing each argument (for example, by value or by reference), and the type returned.

The Grouping of Phases into Passes

The discussion of phases deals with the logical organization of a compiler. In an implementation, activities from several phases may be grouped together into a pass that reads an input file and writes an output file. For example, the front-end phases of lexical analysis, syntax analysis, semantic analysis, and intermediate code generation might be grouped together into one pass. Code optimization might be an optional pass. Then there could be a back-end pass consisting of code generation for a particular target machine.

The compiler writer, like any software developer, can profitably use modern software development environments containing tools such as language editors, debuggers, version managers, profilers, test harnesses, and so on. In addition to these general software-development tools, other more specialized tools have been created to help implement various phases of a compiler.

These tools use specialized languages for specifying and implementing spe-cific components, and many use quite sophisticated algorithms. The most suc-cessful tools are those that hide the details of the generation algorithm and produce components that can be easily integrated into the remainder of the compiler. Some commonly used compiler-construction tools include

Parser generators that automatically produce syntax analyzers from a grammatical description of a programming language.

Scanner generators that produce lexical analyzers from a regular-expres-sion description of the tokens of a language.

4. Code-generator generators that produce a code generator from a collection of rules for translating each operation of the intermediate language into the machine language for a target machine.

6. Compiler-construction toolkits that provide an integrated set of routines for constructing various phases of a compiler.

We shall describe many of these tools throughout this book.