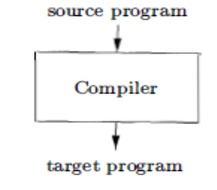 If the target program is an executable machine-language program, it can then be called by the user to process inputs and produce outputs; see Fig. 1.2.

An interpreter is another common kind of language processor. Instead of producing a target program as a translation, an interpreter appears to directly execute the operations specified in the source program on inputs supplied by the user, as shown in Fig. 1.3. 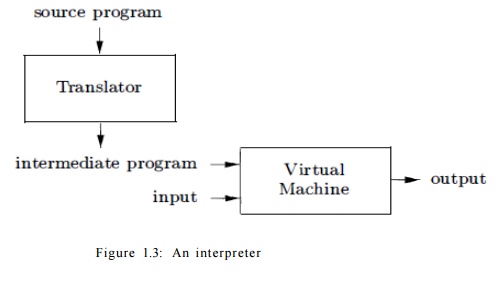 The machine-language target program produced by a compiler is usually much faster than an interpreter at mapping inputs to outputs . An interpreter, however, can usually give better error diagnostics than a compiler, because it executes the source program statement by statement.

E x a m p l e 1 . 1 : Java language processors combine compilation and interpretation, as shown in Fig. 1.4. A Java source program may first be compiled into an intermediate form called bytecodes. The bytecodes are then interpreted by a virtual machine. A benefit of this arrangement is that bytecodes compiled on one machine can be interpreted on another machine, perhaps across a network.

In order to achieve faster processing of inputs to outputs, some Java compilers, called just-in-time compilers, translate the bytecodes into machine language immediately before they run the intermediate program to process the input. 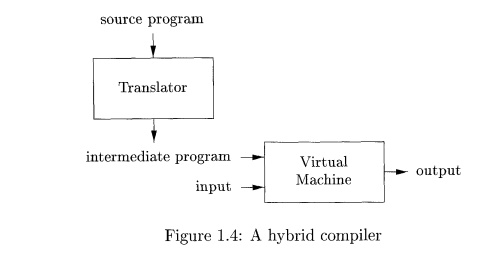 In addition to a compiler, several other programs may be required to create an executable target program, as shown in Fig. 1.5. A source program may be divided into modules stored in separate files. The task of collecting the source program is sometimes entrusted to a separate program, called a preprocessor. The preprocessor may also expand shorthands, called macros, into source lan-guage statements.

Large programs are often compiled in pieces, so the relocatable machine code may have to be linked together with other relocatable object files and library files into the code that actually runs on the machine. The linker resolves external memory addresses, where the code in one file may refer to a location in another file. The loader then puts together all of the executable object files into memory for execution. 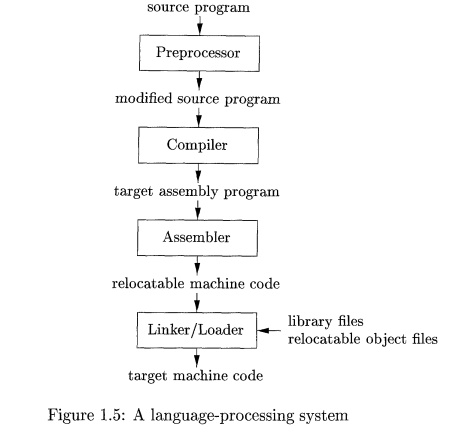