The Secondary or Anamnestic Response

Reexposure of immune animals or human beings to an immunizing antigen to which they have been previously exposed induces a secondary, recall, or anamnestic response.

THE SECONDARY OR ANAMNESTIC RESPONSE

Reexposure of immune animals or human beings to an immunizing antigen to which they have been previously exposed induces a secondary, recall, or anamnestic response. The ca-pacity to mount a secondary immune response can persist for many years, providing long-lasting protection against reinfection.

The secondary response has some important characteristics—some dependent on the existence of an expanded population of memory cells, ready to be stimulated, and others dependent on the prolonged retention of antigen in the lymph nodes with continuous stim-ulation of B cells over long periods of time.

A. Differentiation of B Memory Cells.

During the peak of a primary response, there is a duality in the fate of activated B cells: while most will evolve into antibody-producing plasma cells, others will differentiate into memory B cells.

The differentiation of memory cells is believed to take place in the germinal centers of secondary lymphoid tissues. As a prememory B cell enters a follicle, it migrates into the germinal center, where it undergoes active proliferation. At this stage, the “switch” from IgM to IgG or other isotype synthesis is taking place and the V-region genes undergo so-matic hypermutation. After completing this round of proliferation, the resulting memory B cells need additional signals for full differentiation:

1.           Clones with high-affinity mlg in the membrane will be able to interact with anti-gen molecules immobilized by follicular dendritic cells. As a consequence, these clones will receive strong activation and differentiation signals. In contrast, clones with low-affinity mIg will not be able to compete with preformed anti-body for binding to the immobilized antigen epitopes, will not receive adequate signals, and will undergo apoptosis.

2.           The evolution of this antigen-stimulated memory B-cell precursor into a mem-ory B cell requires a second signal provided by a helper T cell, in the form of the CD40/CD40L interaction. Other signals, such as the one delivered by the CD21/CD23 interaction, may result into direct evolution of the prememory B cell into an antibody-producing plasma cell.

Consequences of the Existence of an Expanded Population of Memory Cells

Four major features of a secondary immune response (Fig. 12.1) result from the existence of expanded populations of memory cells:

1.           Lower threshold dose of immunogen, i.e., the dose of antigen necessary to in-duce a secondary response is lower than the dose required to induce a primary response.

2.           Shorter lag phase, i.e., it takes a shorter time for antibody to be detected in cir-culation after immunization.

3.           Faster increase in antibody concentrations and higher titers of antibody at the peak of the response.

4.           Predominance of IgG antibody is characteristic of the secondary immune re-sponse, probably a consequence of the fact that memory B cells express IgG on their membranes and will produce IgG after stimulation. 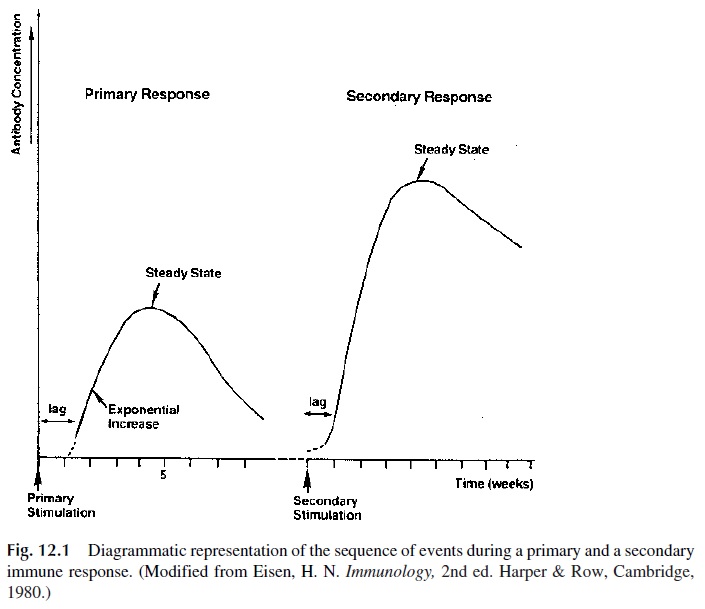 Antigen-antibody complexes will form early in a secondary immune response and are taken up by follicular dendritic cells that express Fcγ receptors on their membrane. They remain associated with these cells for a long period of time, with the following consequences:

2.           Affinity maturation. It is known that the affinity of antibodies increases during the primary immune response and even more so in the secondary and subsequent responses. This maturation is a result of the selection of memory B cells with progressively higher affinity mIg antibodies during a persistent immune re-sponse. This selection is a direct consequence of the retention of antigen-anti-body complexes by the follicular dendritic cells. The antigen moieties of the re-tained immune complexes are effectively presented to the immune system for as long as the complexes remain associated to the dendritic cells. As free antibod-ies and mIg compete for binding to the immobilized antigen, only B cells with mIg of higher affinity than the previously synthesized antibodies will be able to compete effectively and receive activation signals. Consequently, the affinity of the synthesized antibodies will show a steady increase.

3.           Increased avidity and increased cross-reactivity. During a long-lasting secondary response to a complex immunogen, clones responding to minor determinants emerge. Cryptic epitopes that are not recognized in the primary immune re-sponse may also be recognized as a consequence of repeated stimulation. There-fore, a wider range of antibodies is produced in the secondary immune response. This results in increased avidity (as discussed, avidity is the sum of binding forces mediated by different antibody molecules binding simultaneously to the same antigen). On the other hand, as the repertoire of antibodies recogniz-ing different epitopes of a given immunogen increases, so do increase the prob-abilities for the emergence of cross-reactive antibodies recognizing antigenic de-terminants common to other immunogens.