The first contact with an antigen evokes a primary response, which has the following characteristics:

The first contact with an antigen evokes a primary response, which has the following characteristics:

1.           There is a relatively long lag between the stimulus and the detection of antibod-ies by current methods (varying between 3–4 days after the injection of heterol-ogous erythrocytes and 10–14 days after the injection of killed bacterial cells). Part of this variation depends on the sensitivity of antibody-detection methods, but it is also a reflection of the potency of the immunogen.

2.           The first antibody class to be synthesized is usually IgM. Later in the response, IgG antibodies will predominate over IgM antibodies. This phenomenon, known as IgM-IgG switch, is controlled by different interleukins released by activated helper T lymphocytes and by specific co-stimulatory signals mediated by CD28/CD80, CD40/CD40L, and CD21/CD23.

3.           After rising exponentially for some time, antibody levels reach a steady state and then decline (Fig. 12.1). Adjuvant administration will keep the antibody levels high for months.

Several regulatory mechanisms will operate in order to turn off antibody production after the infectious agent (or any other type of immunogen) has been eliminated.

2.           The increase in IgG concentration during the later stages of the primary response may lead to a general depression of IgG synthesis as a consequence of negative feedback regulation .

3.           Suppressor cell activity increases as the immune response evolves and predom-inates after elimination of the antigen. The regulation of suppressor cells and the mechanisms of suppression are poorly understood aspects of the immune re-sponse. Several possibilities have been considered: (a) As the TH2 activity pre-dominates, several down regulatory cytokines are produced. IL-4 downregulates TH1 cells, and IL-10 downregulates both TH1 and TH2 cells. T cells with sup-pressor activity persist after the antigen is eliminated, either as a consequence of their late activation or of a longer life span. (b) As the immune response proceeds and IgG antibodies are synthesized, IgG-containing antigen-antibody complexes have been proposed to have a direct downregulating effect on B cells consequent to their binding through type II Fcγ receptors. (c) Anti-idiotypic antibodies de-velop during normal immune responses, reacting with variable-region epitopes or idiotypes presented by the antibodies produced against the antigen that elicited the immune response. The easiest way to understand this response is to accept that a normal state of low zone tolerance to the millions of idiotypes that are presented by antigen receptors can be broken when one or a few specific an-tibodies are produced in large concentrations, suddenly exposing the immune system to large concentrations of molecules with unique idiotypes. These anti-bodies are believed to participate in negative regulation of the immune response probably by binding to membrane immunoglobulins from antigen-specific B cells expressing variable regions of the same specificity as the antibody molecules that triggered the anti-idiotypic antibody. The binding of an antibody to a membrane immunoglobulin induces B-lymphocyte proliferation, but the proliferating B cells fail to differentiate into antibody-producing cells. At the same time, the occupancy of the membrane immunoglobulin binding sites by the anti-idiotypic antibodies prevents the proper antigenic stimulation of the B lym-phocyte (Fig. 12.2). 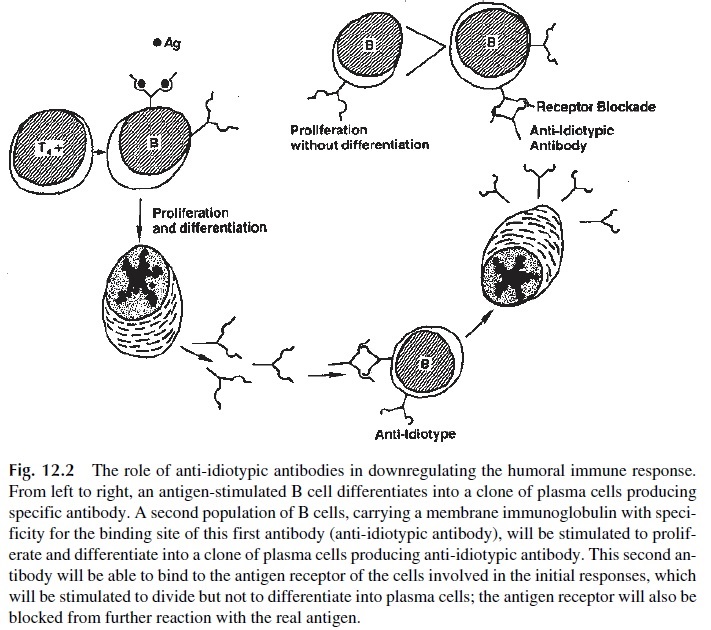