The gastrointestinal and respiratory mucosae are among the most common portals of entry used by infectious agents.

The gastrointestinal and respiratory mucosae are among the most common portals of entry used by infectious agents. Since this constant exposure only rarely results in clinical dis-ease, it seems obvious that strongly protective mechanisms must exist at the mucosal level. Some of those protective mechanisms are nonspecific and of a physicochemical nature, in-cluding the integrity of mucosal surfaces, gastric pH, gastrointestinal traffic, proteases, and bile present in the intestinal lumen, as well as the flow of bronchial secretions, glucosi-dases, and bactericidal enzymes (e.g., lysozyme) found in respiratory secretions. At the same time, cell-mediated and humoral immune mechanisms are also operative in mucosal membranes.

A. Cell-Mediated Immune Mechanisms at the Mucosal Levels

1.           Phagocytic cells (particularly macrophages) abound in the submucosa and rep-resent an important mechanism for nonspecific elimination of particulate matter and microbial agents of limited virulence.

2.           γδ T lymphocytes are also present in large numbers in the submucosal tissues. It has been proposed that these cells seem able to cause the lysis of infected cells by MHC-independent recognition of altered glycosylation patterns of cell mem-brane glycoproteins or by recognition of cell-associated microbial superantigens.

B. Humoral Immunity at the Mucosal Level

A large volume of data has been compiled concerning the induction and physiological sig-nificance of humoral immunity at the mucosal level. A major established fact, supported by several lines of experimental work, is that the induction of secretory antibodies requires di-rect mucosal stimulation. Ogra and coworkers demonstrated that the systemic administra-tion of an attenuated vaccine results in a systemic humoral response, while no secretory an-tibodies are detected. In contrast, topical immunization with live, attenuated poliovirus results in both a secretory IgA response and a systemic IgM-IgG response (Fig. 12.4). 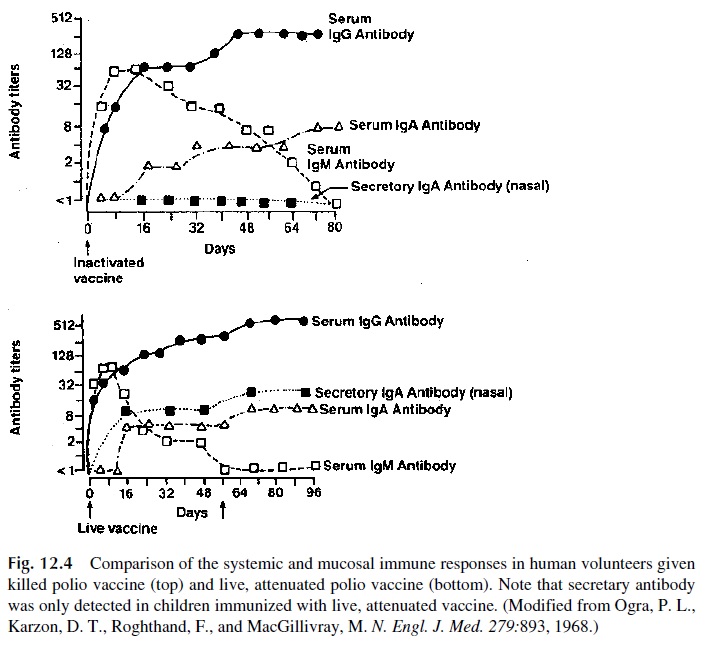 In addition, it has been demonstrated that the stimulation of a given sector of the mu-cosal system (GI tract) may result in detectable responses on nonstimulated areas (upper respiratory tract). This protection of distant areas is compatible with the unitarian concept of a mucosal immunological network with constant traffic of immune cells from one sec-tor to another (Fig. 12.5). For example, antigen-sensitized cells from the gut-associated lymphoid tissue (GALT), or from the peribronchial lymphoid tissues, enter the general cir-culation via the draining lymphatic vessels. Their systemic recirculation results in their mi-gration towards the remaining secretory-associated lymphoid tissues including the gas-trointestinal tract, the airways, the urinary tract, and the mammary, salivary, and cervical glands of the uterus. 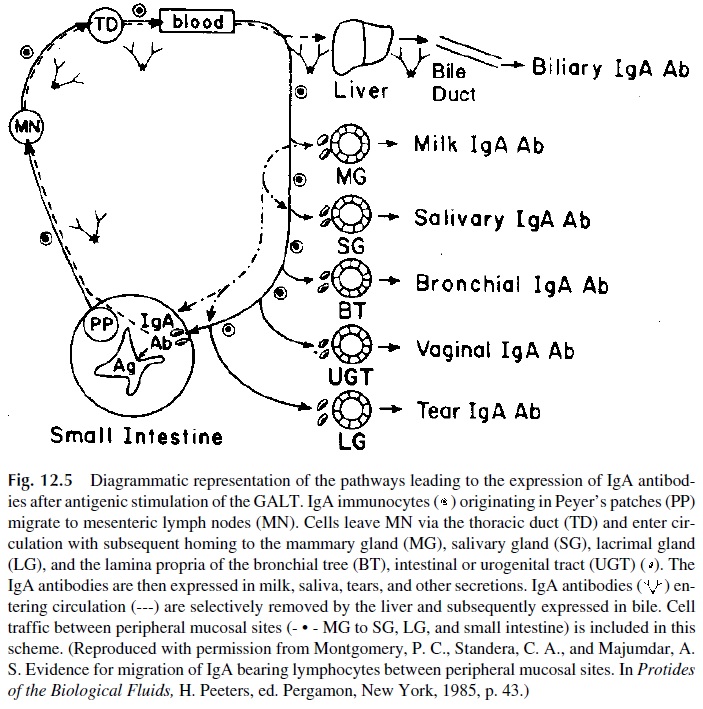 In some mammalian species, milk-secreted antibodies are actively absorbed in the new-born’s gut and constitute the main source of adoptive immunity in the neonate. This usu-ally is observed in species in which there is limited or no placental transfer of antibodies. In mammalians in which placental transfer of immunoglobulins is very effective (such as humans), the antibodies ingested with maternal milk are not absorbed. However, milk an-tibodies seem to provide passive immunity at the gastrointestinal level, which may be a very important factor in preventing infectious gastroenteritis in the newborn, whose mu-cosal immune system is not fully developed.

The main immunological function of secretory IgA is believed to be to prevent microbial adherence to the mucosal epithelia, which usually precedes colonization and systemic in-vasion. However, in several experimental models it has been demonstrated that disease can be prevented without interference with infection, so there are unresolved questions con-cerning the anti-infectious mechanism(s) of secretory antibodies.

The relative importance of cellular versus humoral mucosal defense mechanism has not been properly established. However, many IgA-deficient individuals, with very low or absent circulating and secretory IgA, are totally asymptomatic, suggesting that cell-medi-ated mechanisms may play a significant protective role.